Tuesday (16,529 steps) - Work in the office. Headed directly to Stone House after work. I was supposed to be doing an Z2 trail run, and with it being so dark, I didn't want to have to do any road crossings. It was a gorgeous night, maybe a bit chilly. 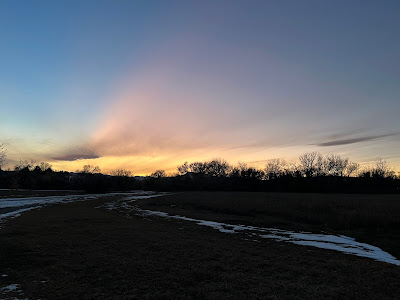 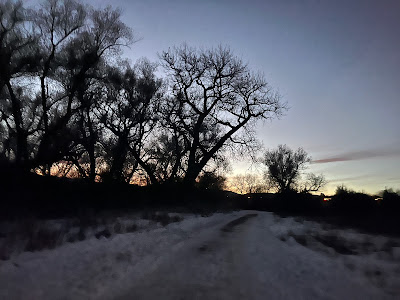 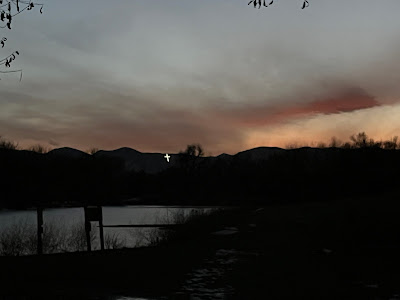 I got all my miles in with just running up and down random trails. Went to Green Mountain Beer after. It was cold enough that we actually sat inside! Had just one beer.
Wednesday (19,305 steps) - Work in the office. Thankfully, we were getting out early for the long weekend! I had another "hike" on schedule. I headed over to North Table and figured that if I ran at least SOME of it, that I would be done before I needed a headlamp. There were a decent number of cars at the trail head, but it was actually pretty deserted. Saw ZERO bikes (which is RARE) and not that many people. I actually ran almost the whole loop, with the exception of the first big climb and a small section about 4 miles in. It was windy, snowy, icy and muddy, but what an incredible day for being alone on the trails. I needed this. 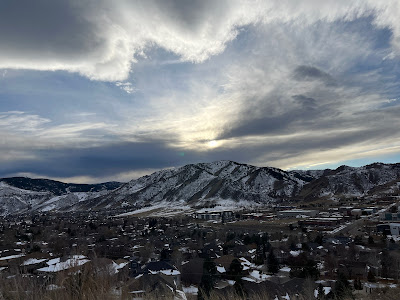 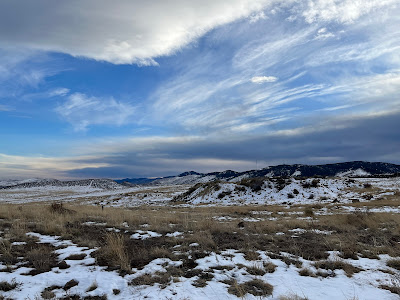 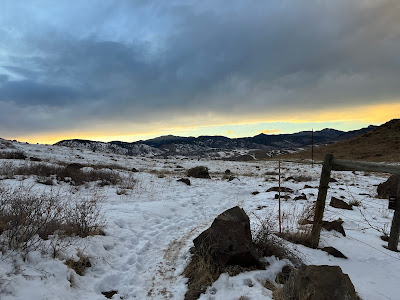 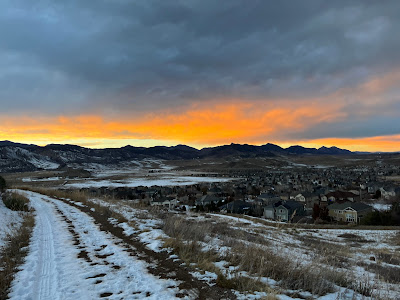 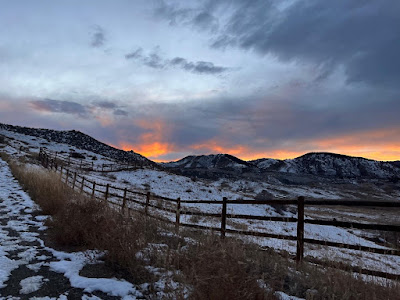 Arrived at home to find out my new lamp had been delivered! I love it! And maybe I can read in bed without going blind with my current dim lighting. 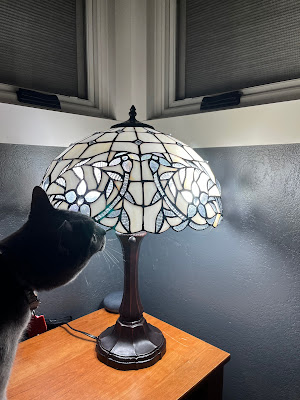 Thursday (9,960 steps) - Up early to go to Golden to run the Turkey Chase! It was pretty chilly, but I was worried that I was overdressed wearing two top layers. I met Maureen there and we cycled through the bathroom lines and chatted with Carol waiting for the race to start. We kinda screwed up and started WAY too far in the back. Most of the course was on bike path and there were way too many people for such a narrow area. The 3/4 of a mile were pretty frustrating. I ended up running most of the race by myself because at some point I guess Colfax had to stop and poop and Mo didn't catch back up. This was not fast by any stretch of the imagination, but I ran at a "fast" pace for ME, and I didn't walk at all - plus, I had negative splits! Woo!! 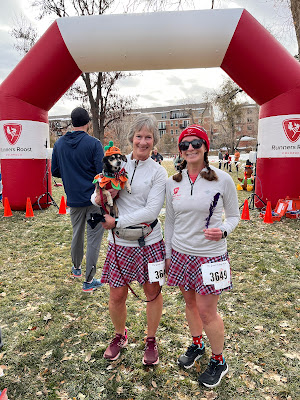 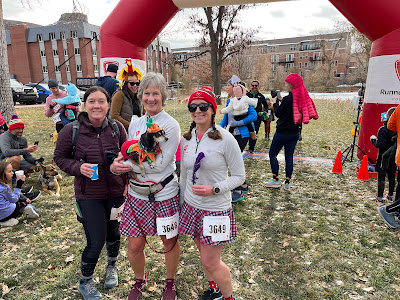 We stuck around at the finish in the tiny beer garden. Somehow, NONE of us won any of the raffle prizes. Boo. Went home to shower because I was freezing. We watched some American Horror Story until it was time to go to Kristin and Doug's house for Thanksgiving dinner. OMG, it was so delicious and I definitely ate too much. 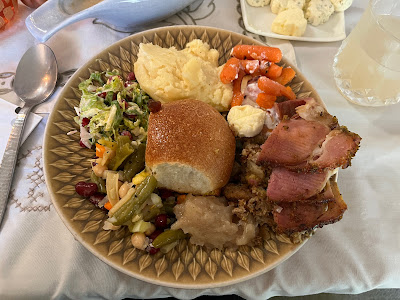 A talked me into playing some Nintendo Switch game with her - Gang Beasts. We were both awful at it, but we laughed a lot. Fun!
Friday (17,071 steps) - I managed to talk Ariel into going with me to Wash Park for a walk - mainly because we weren't starting until 8, plus I told her I would buy her coffee. 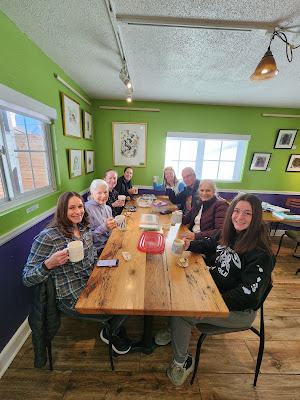 It was a great morning! On the way home we stopped at Runner's Roost in Lakewood so A could get some new shoes, Michael's for a picture frame, and to give Blue-C a much-needed car wash. 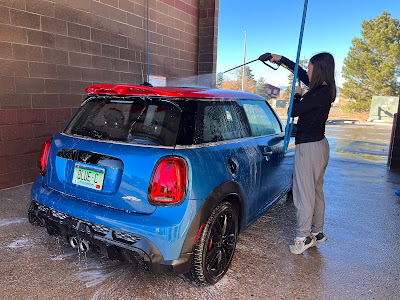 Afternoon was spent hanging my Bigfoot finisher print, and getting the remaining wall in  my bedroom ready for painting. The before picture: 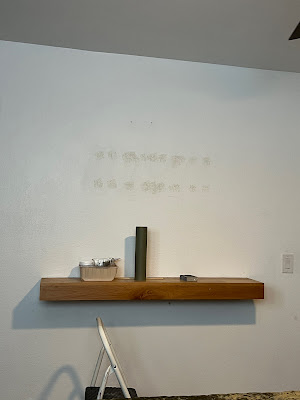 While I was working on the wall, Ariel was putting the coverings on my windows - I hope it will get a little darker in my room at night! 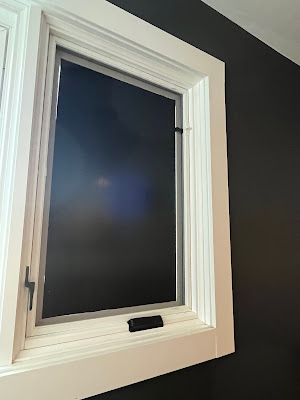 We got the initial coat of paint done - but still another coat, plus still have to get the shelf painted, but making progress. 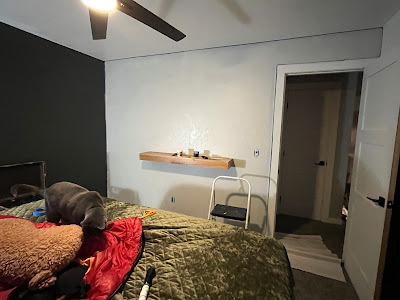 Saturday (24,279 steps) - Headed to Golden to run with Runner's Edge at South Table! This has been a tradition to run the weekend after Thanksgiving for many years, and I was glad to be out again. I had two hours on schedule and ended up running (faster than planned) with Kristin and Lisa. 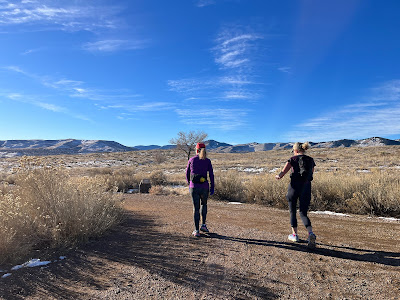 Socialized for a bit before heading home to shower. Finally got the shelf painted! It matches the darker walls in the room now. I love it! 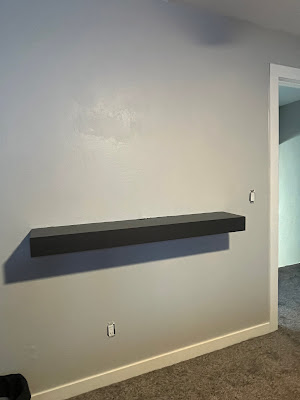 Did some grocery shopping (grumble grumble) and we watched more "Dead to Me." This show is seriously crazy.
Sunday (13,844 steps) - Kristin and Doug picked me up around 8:15 so we could go to Sloan's Lake for the "Brunch Run," although it was a scheduled rest day for me, so I planned to walk with Doug. 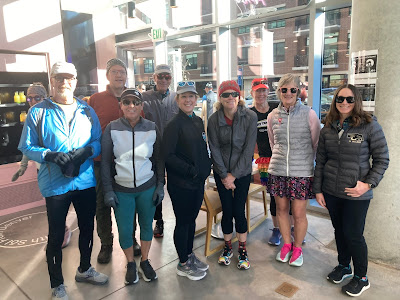 The walk was quite lovely (although a bit chilly). We went to Tap and Burger for brunch, and it was DELICIOUS!! When the check came I quickly remember why this place annoys me. Don't tell me something "comes with it" and then charge me more than $2 extra for it. Plus 75c for ranch? I don't mind paying for it, but tell me beforehand. 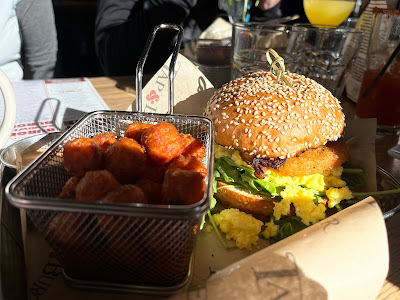 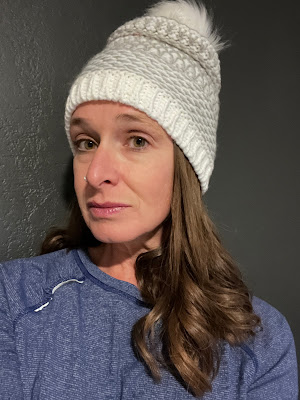 And I just had to post this picture of Batman, because it's just so silly: 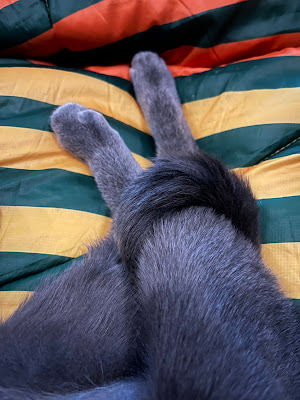 Monday (16,841 steps) - Work from home. Had a 6 mile "Z2 trail run" on schedule. I was cold sitting at home so I went early for my run on the south side - basically as an excuse to take a steaming hot shower sooner. Unbeknownst to me, but I was about to have the best run of my life!! I have never EVER (in the 7+ years I've been running at the lake) run this route without walking. SUCH a fantastic feeling to be able to do this!!! 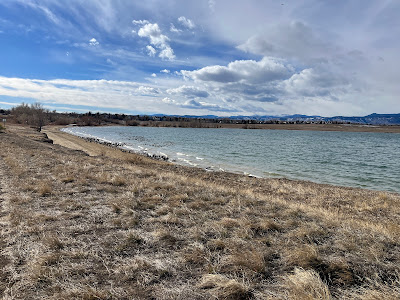 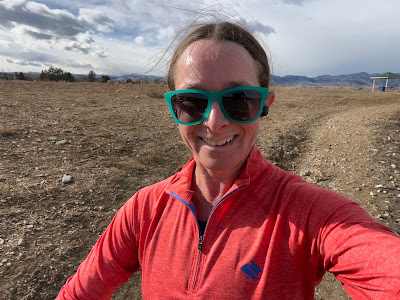 I know that I've been working hard, and runs like this prove that it's not for nothing!! Definitely feel like I'm coming down with something (YES, AGAIN), so I spent the second half of my work day working from bed. Blech. TV and in bed early.
Stats:
at November 30, 2022