Tuesday (21,296 steps) - One would have hoped I would have been able to stay in bed longer after basically having been up for three straight days. That was NOT the case. Even though it was probably 4 am before we went to sleep I was still up before 8? We went downstairs to see what was available at the breakfast buffet - I was very pleased!! The rest of the day is kind of a blur. We went back to the room and I definitely ended up falling asleep again. Woke up and decided we needed to get out and look at that big bridge in the daylight. On the way we tried to find a waterfall, but didn't have much luck. We did find turkeys, however! 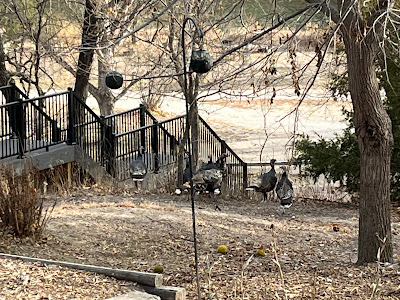 And this smaller bridge that looked pretty neat too. 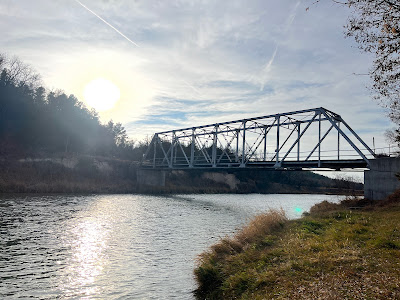 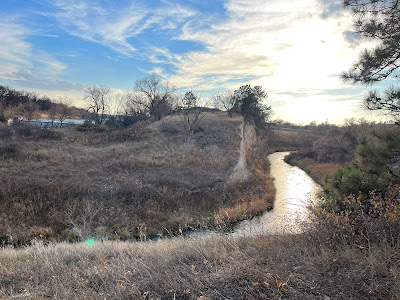 We were able to find the turnoff that had the signage in the race and walked over - go me, I walked about a mile and a half. 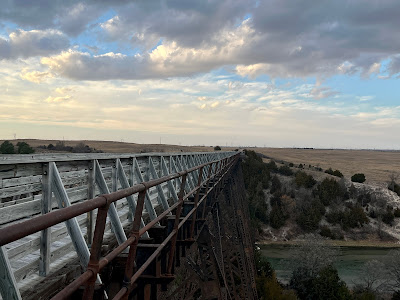 We decided that we were pretty hungry, so we headed to one of the only restaurants in town for dinner, the Peppermill. It was really REALLY good. And yes, I finished everything on this plate, plus took some cheesecake to go! 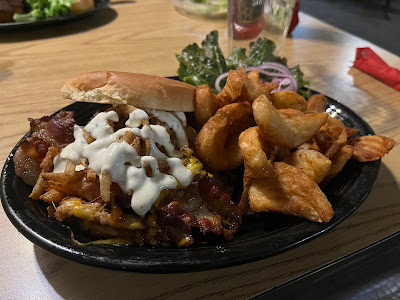 After getting back to the room we had to pack up and get ready to leave. I spent a LONG time sitting in Lisa's foot massager, which was WONDERFUL. Went to bed fairly early, but I didn't sleep well at all with tender skin/legs. Ugh.
Wednesday (9,607 steps) - Up relatively early. Finished packing at got food at the buffet again. Still delicious. Made a quick stop to get a snow brush and drinks at the gas station before heading out of town for the long (but not as long as the way out) drive back to Denver. It was COLD and very foggy most of the drive. We finally stopped at a tiny cafe just in Sedgwick. 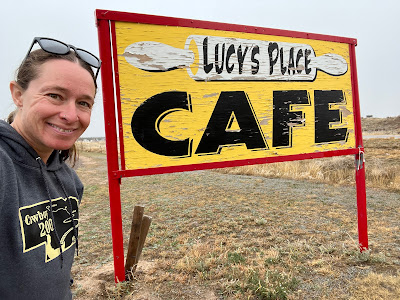 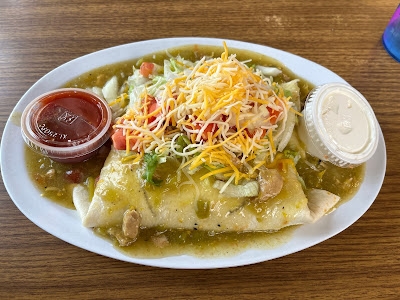 The food was SO delicious - and not expensive! The rest of the drive was really uneventful, and we got to the house maybe around 3:00. Initially, the door wouldn't unlock, so that wasn't fun. Luckily it hadn't been that long since I'd changed the passcode, so I knew how to change the batteries and get that done. Ben was supposed to be moved out while I was gone, but all he'd done was cancel the internet and move a few things. I went to pick up the cats, then tried to get the internet done, but it was too late in the day. Arg.
Thursday (9,907 steps) - THANKFULLY, I had decided to take an extra day off at the end of my vacation. This ended up being a CRAZY busy day. Still not sleeping well (which is not abnormal after these longer races, it takes me at least a week or two for my skin to feel less twitchy and everything to calm down). Ariel and I got coffee, but she had to go to school. After she left, I opened up one of my packages that had arrived while I was gone. I was excited to see my shipment of beginner crochet kits! 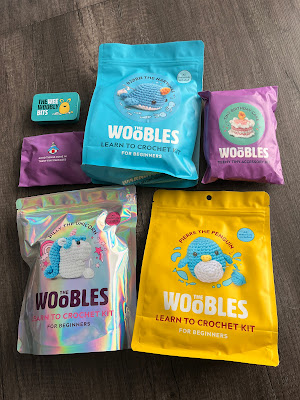 I decided I REALLY wanted to try to make Ariel the penguin for her birthday. I had even ordered accessories for it - a birthday cake and party hat. First, I needed to start - and actually learn how to crochet. Ugh. 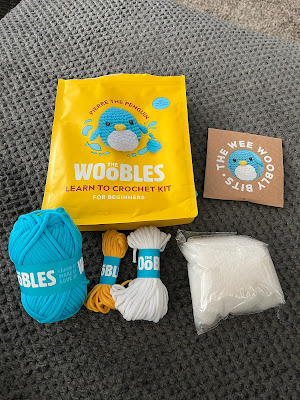 All the initial training happens through videos, and I was trying to watch them on my phone. It worked, but it wasn't ideal. I made some basic progress, but then decided I had other things OUTSIDE the house that really needed to get done. I made a grocery list and headed out, also stopping to pick up my Xfinity modem for the internet - which I was told was "super" easy to install. We'll see. 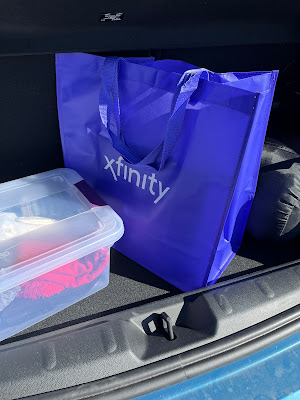 Then, had to go to Target to get all the essentials that we had run out of over the last few months that Ben didn't replace, even though household stuff was supposed to be his responsibility. I digress. 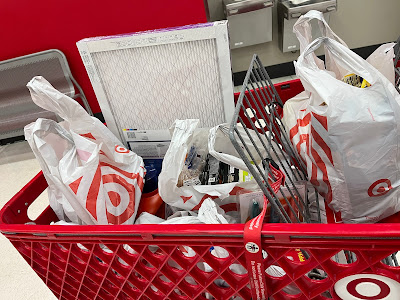 I had a little bit of time before Ariel would be home, so I worked on the crochet. I got a little stuck and Kristin had offered to assist, so I headed over to hear house for an hour-ish so she could explain things a bit more clearly and help. "Pierre" is coming along nicely, I think!! 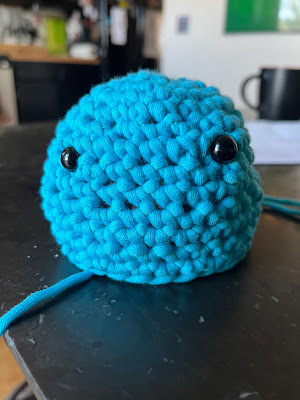 Since I was going to be losing some furniture, I headed to AFW to look at stuff and had Ariel join me when she was done with practice. Priced some stuff out, but a lot of stuff was pretty delayed for delivery. We did not make any decisions. Dinner, and I watched some TV upstairs before bed.
Friday (10,656 steps) - Wash Park! It had been a while and it was good to see everyone. It was very cold and Rocket was struggling, so we did an even shorter walk than usual, which everyone was fine with. Coffee was delicious, like always. Into the office for the first time in over a week, and I was crazy busy, which is actually really nice, as long as it's not too overwhelming. I had messaged Greg earlier in the day to see if he wanted to meet up for a Happy Hour beer, which he did. It was great to see him! 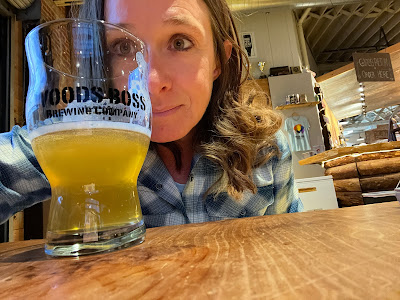 The rest of the night was spent being mad because I got an email that I had been kicked off the Google Nest network - which basically just meant I can't control the thermostat from my phone. I was trying every tutorial trying to figure it out, and NOTHING was matching up with what the steps said and finally Ariel and I gave up on trying to figure it out.
Saturday (11,319 steps) - Did a Peloton ride, then sat around for a bit in the morning, icing my shin that STILL hurts. I've never had pain in that spot and it's definitely frustrating. 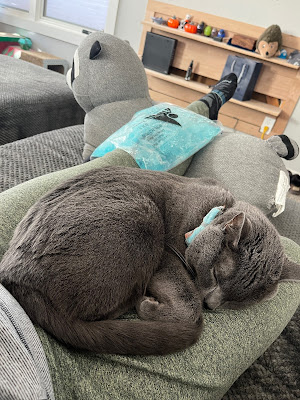 Went for a walk at lunch. In the afternoon I went to look at more furniture options. I ended up really liking a table/chair set AND a bedroom set. I wasn't initially planning on getting anything quite this soon, but they were going to be able to deliver really soon, I figured it was better to get it now than to end up being without stuff. Later in the evening Ariel and I ran some more errands. No idea what else happened.
Sunday (10,072 steps) - May have actually "slept in" a bit. Since Ariel was at work, I REALLY needed to get to work Pierre! Spoiler - Batman is NOT a big help while I am doing this. 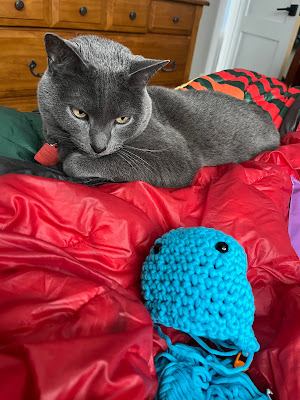 It isn't perfect, but I made a LOT of progress!!! 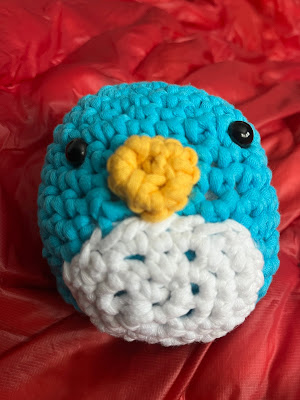 I also finally got around to making more mini quiche! I haven't made these in a long time, and I forget how fast it is to make these and how nice it is to take them to work for breakfast. 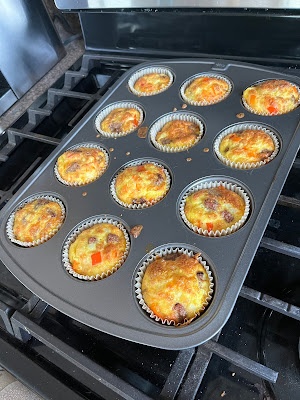 Went for a walk at lunch and noticed a new bench! 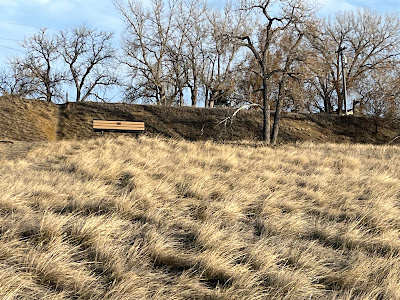 Did some stuff around the house, including ripping out some of the built in shelving in the bedroom and getting stuff moved around for the furniture delivery later in the week. Headed down to Old Town to New Image to meet up with Tyler, Terri, Jeramiah, Doug and Kristin to celebrate Javelina and Cowboy. It's been a long time since we've gotten together like that - it was fun! 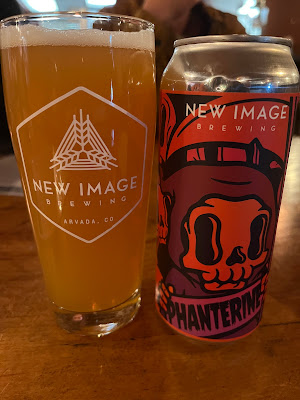 Headed home for dinner and TV. Jeramiah came over for a bit to chat about some stuff. In bed relatively early.
Monday (7,892 steps) - HAPPY 17TH BIRTHDAY TO ARIEL!!!!!!!!! I posted this picture on social media because it was the first time she ever had pancakes and she looks SO happy - and to this day, she loves pancakes and STILL is really happy when she eats them. 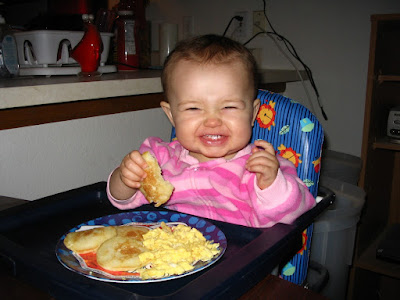 As an "almost" adult, she was excited to get a new Hydroflask. Haha. 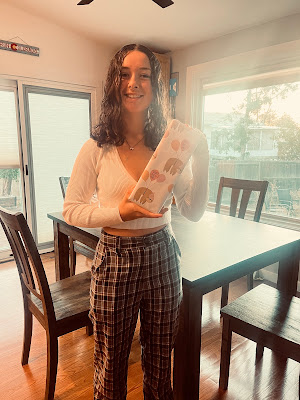 On my lunch break I did a Peloton ride and went for a short walk. Since I was working from home and used all my breaks to work on the rest of Pierre!! I only had one wing left, which didn't take long. 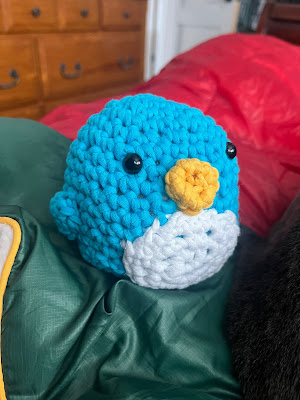 Then onto the party hat, which wasn't as complicated as I thought it would be. 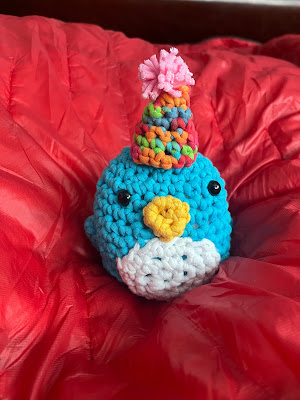 And finally - the cake!! Everything turned out SO WELL. Not perfect, by any stretch, but I thought I was pretty unteachable, and these turned out pretty great. 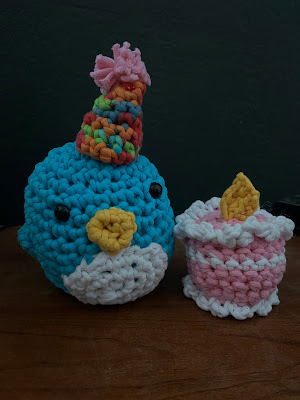 Even MORE great was Ariel genuinely liking that I made them for her. (Or at least, she faked it well). We had plans to set "Smile" and had to rush a bit to get out the door. We stopped at King Soopers to pick up cake for later, then went to Panda Express for dinner. They were SUPER busy and we had to eat pretty fast to get to the movie on time. The movie was GOOD. I don't normally scare/jump easily and this had me doing both. We liked it! Quickly had cake at home, and since it was late, in bed soon after.
Stats:
at November 22, 2022