So I managed to wake up in plenty of time to get ready for the Kid's race. Great, since I had passed out before setting an alarm. Oops.

We had a brilliant plan to leave around 6:45, allowing us plenty of time to get through the super secret entrance in Downtown Disney at 7:15, be ready to run at 7:45, run at 8 and be done shortly thereafter. Only.

We left late. It took longer to get there than we thought. The super secret entrance? CROWDED. Super long line - they had to check bags of EVERYONE that was entering. And since these were parents with young kids? Long. Lines. We finally entered the park, I took A and Heather's two oldest kids one way, and she left with Gabs for the 400. 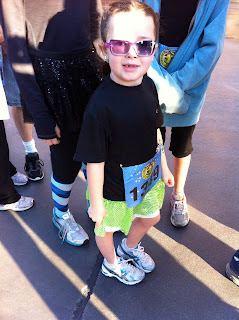 So they yell "Go!" and immediately the kid in front of me stops. I try to stop so I don't fall on him, which causes ME to fall and re-skin my knee and drop my phone. In a Kid's race. Brutal. I had some catching up to do as the kids had already taken off. My calves? Aching. IN A KIDS RACE. Finally caught up to the kids and they were running pretty strongly. Until, for some reason, #1 stopped and put A on her back. Meanwhile, I'm yelling "cheater!" (all in good fun). #1 drops A and off they go. 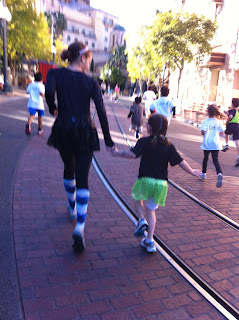 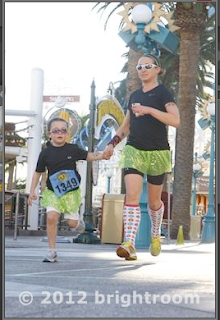 A began to tire out a little more than halfway there. #1 and #2 went on ahead, and obviously I stuck with A. She was doing really well, but I had no idea on pace since I had forgotten to wear my watch. We started to see the signs for the shorter kid's distances, and I finally got her to run again between the markers for the 100 and 200m. She SPRINTED toward the finish: 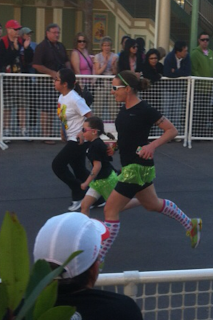 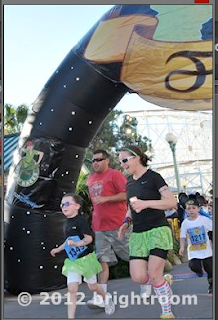 There was no clock at the end, so no idea on the time. I was figuring around 12-13 minutes. Imagine my surprise when I pulled official times later in the evening to find out that even with a minute or more of walking, she still pulled off a 10:14 mile! So proud of her!

We grab our bottles of water and food, then head to watch for Heather and Gabs. We didn't know that all the races hadn't started at the same time, and she didn't have her phone to tell us she got tired of waiting and ran sooner with the 200m group. We barely caught sight of her as she ran by, so no pictures :(

By now it was MUCH later than we had planned. We had tons of stuff still to do. We went and had breakfast down the street with some of Heather's extended family. So much fattening and delicious food. I love vacation: 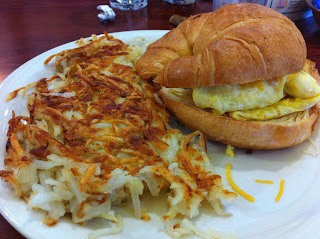 Right after breakfast we headed BACK to the expo. Tried again for goodie bags for Team Sparkle. Out again :( A talked me into getting her the new Minnie Mouse sparkle skirt. Adorable.

After leaving the expo, it was on to the second adventure of the day. Quick stop at the grocery store to pick up goodies for the Ragnar meeting. Oh, what's that you say? Ragnar meeting? Well, I am the only person NOT from SoCal on my team. So they decided to combine a virtual run for Gabs with a Ragnar meeting on Tinker Bell weekend so that I could get a chance to meet everyone. YAY! Everyone was SUPER nice, and NO running was done since it was a billion degrees out. I did, however, eat a cupcake, some cookies, some chips... (catching a theme here?) I also got my pair of Aspaeris Pivot Shorts. Pulled them out of the package and they looked like something A could wear! But, they ARE pretty dang comfortable. If they would have had a pocket, they would have been part of my outfit for the half. There is a picture floating around somewhere of the Ragnar girls, but I don't know who has it. Snagged from Pretty Fittie, a team picture, and I'm ROCKIN' the new Aspaeris shorts! (I'm in the green sparkle skirt, in case you forgot what I look like :D 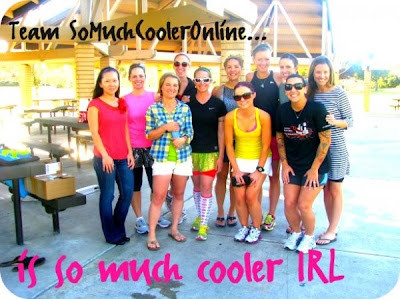 After the meeting, we still had to get iron on transfers for our outfits (nothing like waiting until the last minute) - which Heather's husband had gotten while we were having our meeting. After a bit of trial and error, our outfits were ready to roll. Then it was time to head to meet our friends for some... PRE RACE EATING. Yep. More food.

Riddle me this. Kid's meal at Red Robin. Includes drink, mac and cheese (with free refills) and a side (could include veggies or salad or fries) for $4.99. An adult version is the same size mac, salad, a teeny piece of bread, NO REFILLS ON MAC and twice the price. Mad. I explain to the waiter that I eat A LOT and expected more for my money. Long story short... I did eat half of Heather's plate, and got a refill of mac. But still. Isn't that wrong?? Shouldn't my serving have been bigger, ESPECIALLY with no refill??? The server had the audacity to say, "Wow. You really DO eat a lot." Good thing I don't get offended easily. Pleasantly surprised when my friend Josh picked up the tab. FOR THE WHOLE TABLE. What a rad guy. 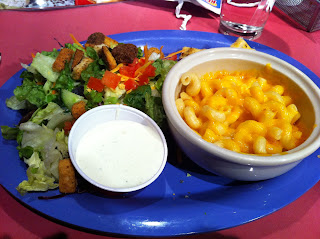 Heather's husband leaves with the kiddo's and we check into the Crowne Plaza across the parking lot. Heather's Priceline steal of $69... between 4 of us. What a deal! Beer in the hotel bar. Well, I actually had 2, which is usually more than I think I should have, but we were having such a good time, I really couldn't resist. 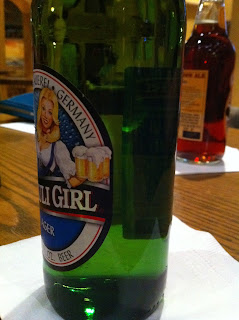