Today was a good day

I kind of sucked for Mother's Day. A came up with THE BEST IDEA of how we could spend the day. She woke me up and suggested we go running at the lake. Normally I would be SO happy to do that. But I had just run a 50k trail race the day before and was EXHAUSTED. She seemed really disappointed :(

Instead, the day was spent eating (a lot) and lounging around the house. We hosted a BBQ for my parents, L and H, and my older sister and her husband and kids. It was chaos. There are pictures somewhere, but I didn't take any. If I come across them, I'll post.

Fast forward to today... my last full day with A before I leave for 33BA. First part of the morning was spent in bed watching "Alice in Wonderland." Then, breakfast at IHOP. Quick stop at A's school where I got her end of year progress report - her teachers think she is awesome and are sad to see her moving up to Kindergarten next year. A wanted to play at the park even though there weren't any other kids there. She got bored after about fifteen minutes, then decided we should at least go for a WALK around the lake. I can manage that.

We saw lots of ducks and geese. We were also surprised when we saw these turtles! Who knew turtles lived in our tiny lake! 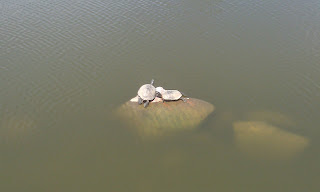 The sidewalk around the lake is one of those "Fit Trails" where they have the stations where you can do stretching and jumping jacks, etc. A loves stopping at those:

The entire one mile loop took us almost an hour. But it was great.

The rest of our afternoon is MORE lounging around the house. We will hit up Happy Hour at Sbux for our 50% off Fraps, then A wants to help me finish packing. She is such an awesome kid.