Alarm was set for 8:00 am so that we could get a workout in and have breakfast before heading to the beach for the day. 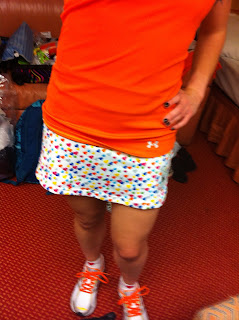 After having run so much in the week, I wanted to give myself a bit of a break and opted to use the Elliptical (I really loathe that machine, even more than the treadmill). Managed to get in about 50 minutes worth. L and I decided that there wasn’t really a point in taking a shower before heading over to the beach because after a half day over there we would be covered in sunscreen and sand.

Breakfast was SUPER good. I rarely get a chance to eat “real” breakfast foods, so I pretty much had a little bit of everything. Eggs, potatoes, even a slice of the tastiest banana bread ever. We didn’t have any idea when our group was supposed to head over, but we heard our color band get called and we headed over around 11:00.

It was a lot more organized than last year, although it was still about an hour ordeal from the time we gathered until the time we got off the boat. The band decided to hold their concert on the beach at Half Moon Cay, which wasn’t an ideal situation for us. You have to understand that we are probably the least crazy people on this cruise. We knew we wouldn’t be able to get close enough for good seats, so we settled a bit further down the beach. Applied the first set of sunscreen… first bottle of the trip already gone. Crazy. Around 12:15 we decided to get our lunch. 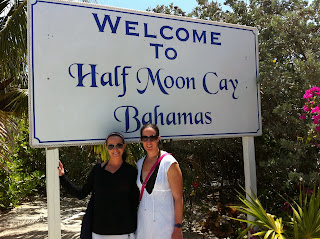 Same as last year, the food is considered “Barbecue” and I had a cheeseburger and some fruit. We ran into Amber, Amanda and Kelly for the first time since we left them on the first day. We told them we would catch up to them later. We walked back over the beach. More tanning. Nothing else to do. I am a sucky person at relaxing. It’s pretty much impossible for me to just sit around doing nothing. Apply more sunscreen. I manage to fall asleep for a bit. L wakes me up to tell me the guys are on stage starting to the concert, so we head over as close as we can get, which isn’t that close.

We were pretty close to the water, and the tide kept coming in further and further… Crazy people that had been camped out all day in front of the stage had moved in as close to the stage as they could get and left their towels and bags… It was hard to concentrate on the concert because people’s stuff kept getting pulled into the water with the waves. I mean people were leaving their purses and stuff there! Madness. 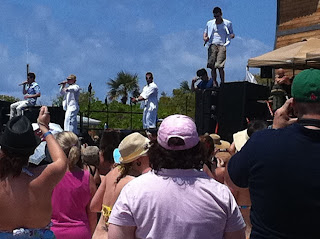 About halfway through the show I feel like I am burning, so I walked back over to apply MORE sunscreen. I finally find L, but the concert is pretty much over by then. We decided we would stay on the island for just a bit longer, but we’re bored, so we head back over to the boat around 4:00.

Get back to our room, then we of course have to take showers. I had sand literally everywhere. The sand even ate the nail polish off half my toes! Never had that happen before. Got dressed and then decided that we would head up and have a salad at the buffet before going to dinner. We got upstairs at 5:30 and the buffet wasn’t even open yet. Apparently not until 6:00. I swear, I must be a complete weirdo by wanting to eat around 5 or 5:30.

We had some time to kill so we went over to the casino and played for about a half hour. Then we want back to the buffet, and got our salads, then headed back downstairs to get our dinner.

We ended up getting seated at a table right behind Amber and Amanda. Ordered the steak again. 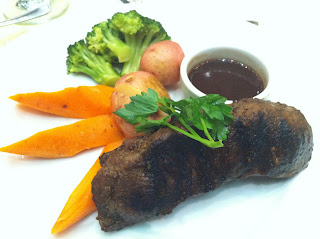 The best part of this meal was that the servers got up on the staircase and sang a NKOTB song. They even had lyrics sheets, and you could totally tell that they had practiced! One of the guys had obviously been watching the NKOTB videos because he had a pretty good dance routine going on. 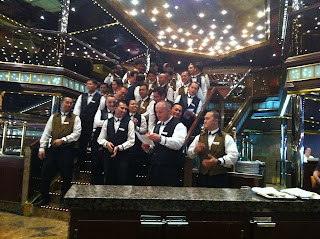 It was hilarious. We split our desserts (½ Amaretto chocolate cake and ½ Baked Alaska). After we were done eating, we chatted a bit more with the girls and decided to meet at their room before the Pajama/Toga party on deck.

Since we had been skipped in receiving our gift bags, we had to head over to the hospitality desk to get one. We get there to find out they are still waiting on the bags themselves, and the lady suggested that we come back in 30 minutes… That not being a long time, we head down the hall to the casino and play a bit longer. When I run out of money, we head back to the desk, get the bags, and then go to our rooms to get ready.
I have the same PJ’s to wear as last year, a Paul Frank tank top and shorts set. It seems colder on the deck this year, so I also am wearing my hoodie. Apparently the first part of the deck party of the night is watching the season finale of “Blue Bloods.” A show I have never heard of, and didn’t know that Donnie was in. A pretty good show if you haven’t seen it before. We were actually watching live via satellite, so it took the full hour to finish.

We decided to stay on deck for the rest of the night so that we didn’t lose our spots. We actually had lucked out and got a pretty good seat on the second raised level. It was SO windy that I kept my hood on because my hair was blowing all over the place. So annoying!!

The guys didn’t come out for a while, but that was ok because the DJ was playing a ton of 80s music, which is also fun. The guys came out in their togas – same as last year. The guys didn’t really start singing their own songs until pretty late this year, I bet it was after 1:00 am. I had decided that this was going to be the night that I would have my beer. I ordered a single bud light around 1:45… by 2:10 I still didn’t have it, so I walked over the bar to find out what happened. The guy claimed I had asked for a bucket (4-16 oz aluminum bottles). Took a few minutes to get it cleared up, but I’ll need to look at my final bill to make sure I didn’t get charged for that many. 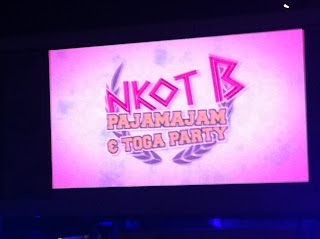 After I finished the first beer, I ordered a second (from a different server). The guys (minus Jon – I think he is a total party pooper) were all out and having fun. I was getting pretty tired, especially since we hadn’t managed to squeeze in a nap this time. We left the deck around 2:30, and headed to bed shortly after. We had decided that without a real schedule for the next day that we would not set an alarm and would just get up whenever.
at May 24, 2011