Woke up at 4:40 (!!) to a downpour of rain. I had actually packed two days in advance, so really all I had to do was get dressed and do a last minute sweep to make sure I didn’t forget anything. A also wanted me to briefly wake her up so she could tell me goodbye. I won’t lie, I’m gonna miss that kid.

My dad showed up only a few minutes late, at 5:18, and then we headed to the airport. Luckily there wasn’t that much traffic due to the early hour, and we arrived in plenty of time. I don’t check a bag very often, but since we are going to be gone for so long, we checked one bag between the two of us – which means we could actually bring full size fluids (SUNSCREEN).

Found our gate, and then to kill time I was trying to finish the ridiculously huge hardcover book I started a few weeks ago. Breakfast at the airport (that we brought from home) of a bagel with peanut butter. I also stopped at a small restaurant and got a banana to eat on the plane and a coffee.

We actually boarded earlier than usual (7:00 for a 7:40 flight), but we ended up leaving late. It was literally so cold outside that we had to de-ice before we could take off. I would later hear from J that there was freezing rain and some snow throughout the day. So long stupid cold weather!! 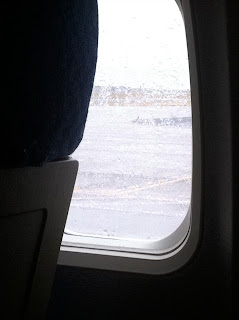 When L checked us in for our flights, the website claimed that there were no seats together. Which was especially weird since I think our flight was only about half full. She boarded first in group 2, and I was in group 4, but we both found room in the oversize bins. The flight to Miami is about 3.5 hours, which gave me time to watch a movie and a half, and do a bit more reading.

We landed in Miami and immediately could feel the heat. At 2:00 local time it was already 88 degrees. Madness!! Especially since it was the low 40s where we had just been a few hours earlier. First order of business was to find a taxi and head to the hotel so that we could drop off our luggage and get some lunch. We arrived there at 2:30, got all the way through check-in (which took f.o.r.e.v.e.r.) only to find out our room wasn’t ready yet. So we had 30 minutes to kill in the lobby, but luckily we ran into a few of our friends (Amber and Amanda) from the cruise last year, so at least we had some catching up to do.

At 3:00 we were finally able to get up to our room, and after a quick change of clothes into more hot/humid appropriate attire, we left and headed to Bayside, an outdoor mall, for lunch. We decided to have Subway, and after the S.L.O.W.E.S.T. chick in the world made our sandwiches, we got to eat. Ravenous!! We were right across the hall from a Sbux, and L saw that only a few people were in line, and since it was happy hour she decided to go before it got busier. It took over 15 minutes to get her drink. If you are impatient or expect things to move quickly, Miami is NOT the place you want to be. Everything took a ridiculous amount of time.

After eating we walked around the mall a bit and then walked over to CVS to buy some fluids (soda) to take on the boat. Amber and Amanda had invited us to dinner later, so we decided to hit up the gym in the hotel and get our workout in. I got the text after 45 minutes of running that they were going to want to go “soon” so we finished and headed upstairs for quick showers.

We met in the lobby at 7 and then walked back over to the Hard Rock Café. Another super slow experience!! The food was good, but our server was a total spaz. For a table of 10, it took 1:45 from start to finish. As always, paying the bill took F.O.R.E.V.E.R.

By now it already 8:45 and we walk back over to CVS to get something to drink, getting there right as they were closing, but luckily the guy was nice enough to let us in to buy a soda. Arrive back at the room, and have to plan out what we are going to need for the day, paint my nails black for 80s night, and finish reading the last 30 pages of my book.

There was a basketball game in Miami, and about 45 minutes before we wanted to go to bed the game ended and since the Heat won, we got to listen to a ton of celebratory noise outside. Horns honking, screaming… annoying. Watched an episode of Criminal Minds and headed to bed around 11:00.
at May 24, 2011