We decided that we would skip the gym this morning in favor of sleep. With all the partying that happens on the cruise, we need as much sleep as we can get! We still set the alarm for 7:30, as the girls had arranged for a shuttle bus to take us to the port at 8:15. Last minute packing (didn’t even bother to “get ready”) and a bagel/peanut butter breakfast and we were right on time for our  meet up in the lobby.

Last year, before we were professionals, we followed the instructions that said you couldn’t board until noon. The girls that we were with insisted that if we got there earlier that we could board sooner. Arrived at about 8:30 and spent the next 35 minutes waiting outside. Finally get inside only to have to wait about another 30 minutes to get through security. Get through security, head upstairs, and then yet ANOTHER line to verify passport information and load the “sign & sail” card. All of this takes until about 10:30-10:45. Boarding for the cruise can’t start until the NKOTB band members board. Spend the next hour checking Facebook and email obsessively because I will be unplugged until docking on Monday (!!!). Also, do a ton of people watching. I’ll just say that there is NOTHING in the world like a group of a couple thousand Thirty-something NKOTB fans and leave it at that.

They finally show up sometime around 11:30-11:45, and then we are actually able to start the boarding process. We were in Zone 3, so we were actually some of the first people on the boat. Of course our rooms aren’t available to us yet, so we head to get lunch… STARVING!! Get some broiled chicken and veggies, salad and fruit. Talk and hang out until we are able to get to our rooms.

We decide that we will check out the fitness center BEFORE heading to our rooms. Nothing scheduled to happen until later in the afternoon. Get suckered into doing a tour of the (very expensive) spa, and find out the gym won’t be available until after 6:00 pm. Boo.

Find our room, and also find out that our luggage hasn’t arrived yet. We still have hours to kill and nothing to do. Watch a bit of tv and rest. Resting apparently meaning – short nap. We made sure to set our alarm so that we could head to the safety briefing and then the sail away party on the Lido deck.

This year the safety meeting was super short, so we headed up to the deck shortly after. Having something to compare this to, I can say that the layout of the deck kinda sucks for the amount of people that are out at any given time. It was super crowded. We stayed on deck for a while for the sail away party. 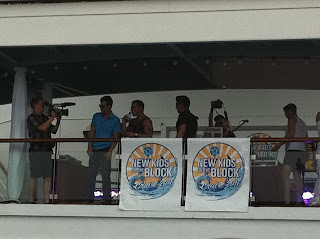 Then it was time to head to dinner. We of course were in the “early dining” group at 6:00. Still trying not to go crazy with cruise food, I had a steak and veggies. Although I did have a dessert… Warm chocolate melting cake with a small side of vanilla ice cream. Man. That was the tastiest dessert I have had in ages. Yum. 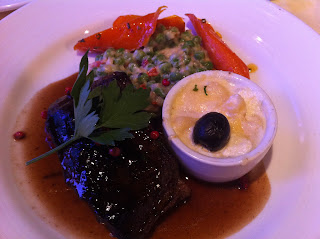 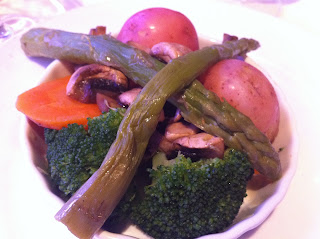 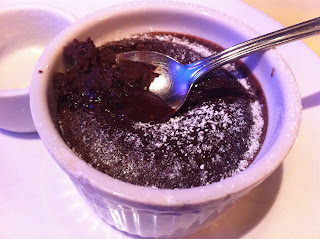 After we ate we headed to our first event, which was a production of NKOTB "Double Dare." It was better than last years theme, and the gaming was pretty funny.

We headed downstairs to change into our gym clothes. Of course we plan on exercising every day that we are on vacation. It’s too dangerous with all the buffets and food everywhere not to. We spent about 45 minutes in the gym, then we hit up the sauna. I haven’t sat in one of those in AGES… didn’t realize they got so hot. Duh. We also hit up the gift shop… have to get at least one Cruise ’11 souvenir. I’m sure J will LOVE his NKOTB shot glass. Hehe… I also picked up a canvas bag.

Showered and changed into our first theme night outfits. Also the one that we were most looking forward to – 80’s night!! I put a lot more thought into this theme than any other theme. Crimped hair, long striped shirt, lace vest, ruffled Guess jean skirt, leg warmers and checkered slip on Vans. It’s amazing how many people take the time to dress up for these, but it made it a lot of fun. The deck party was supposed to start around 11, so we headed back up to the deck.

All the music was 80s themed, NKOTB didn’t even do any of their newer music. Their outfits were hilarious, they did replicas of some of their outfits that they wore when they toured in the late 80s. It was a very fun night, but we got tired pretty early. The guys seemed to head out pretty early, and we left the deck around 1:45 (some of the first people to leave!) Went back to our room, didn’t get to bed until after 2:00. Need to take the advice of the NKOTB… “PACE YOURSELF!” Oy.
at May 24, 2011