Tuesday (12,748 steps) - Stopped at Target on my way TO work to get more bins. I was worried about the weather coming in after I got off. Work in the office. It was actually nice out, so I went for a walk at lunch. Took Olive for a walk after I got home, beating the snow. Then I did a 30 minute Peloton ride and 45 minutes of glutes/legs, core and stretching. Woo.
Wednesday (15,880 steps) - SNOW DAY!!! It was quite lovely not having to get up early. Ariel and I spent a lot of the day (between working) continuing the project of organizing and cleaning up the closets, running gear and the rest of the mud room.
We only left the house to take Olive for a short, snowy walk. 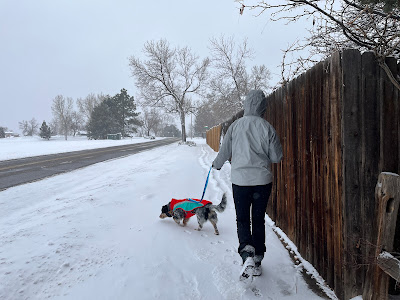 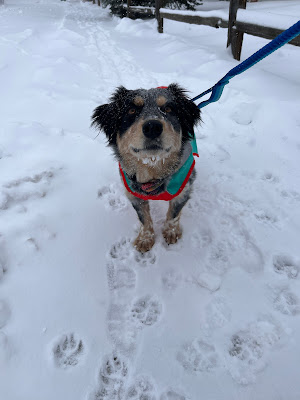 Thursday (24,786 steps) - Work from home. Wooo!!  Finally got around to making more quiches - they aren't even difficult to make, I just get really lazy sometimes :( 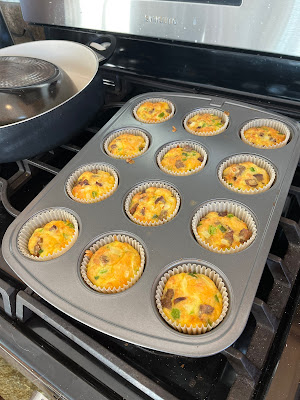 I spent about a half hour on chat with King Soopers (which was NOT fun) because they had one item they supposedly could NOT substitute with anything else, which caused my order to go under the delivery threshold. Needless to say, I was annoyed. THEN, I had to do my hill workout (that I hadn't done on Wednesday because of the snow). Greg likes to give me repeats on a hill with 10%+ grade. I didn't want to go all the way to Boulder or the foothills, but I did find a hill in Superior that was "close enough." Most of the run was perfectly fine! I ran well, and most of the repeats were ok as well, EXCEPT towards the top where there was a decent amount of post holing. I don't think I have complained enough about winter yet. 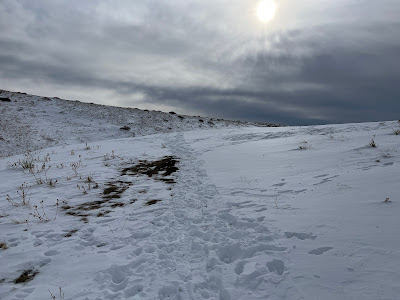 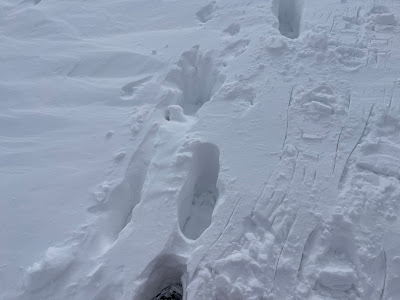 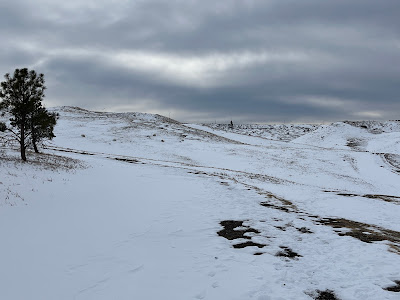 I stopped briefly at the Candela's King Soopers to get a few grocery items and got into an argument with the cashier about eggs ringing up incorrectly. EVERTYHING IS ANNOYING. After work, headed down to Belmar with Olive for run club! There was not a big group this week and Olive was definitely more relaxed. We did C25K with Paula & everyone again, and it was fun! Glad I had brought my spikes, park was icy. Cute pic of Katla & Olive. 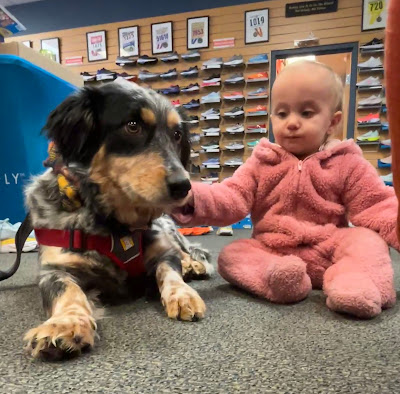 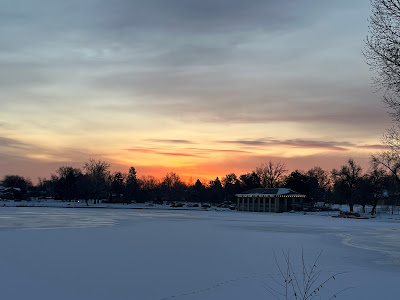 Worked a short day because A had a tour of the CBI scheduled for early afternoon. I met her and Gracie and her mom. It was really interesting, and Ariel has discovered that she really needs to be in the field, that straight lab work would not be thrilling for her. Good to know! Stopped and picked up groceries. Then it was home to do the workout I should have done on Thursday (weather really messed up my schedule). 30 minutes on the Peloton, 45 minutes of upper body, core and stretching. THEN, took Olive for a walk.
Saturday (42,495 steps) - Headed down to Chatfield for the Far Out 20 Miler. Wayne had sent out an email saying that conditions weren't great, so I planned on wearing spikes. Once I arrived, the parking lot seemed packed down, so I decided on my road shoes and Nano Spikes instead of trail shoes and Exo Spikes. I did NOT know that Chatfield does not plow at ALL, so I chose poorly with HOW MUCH SNOW THERE WAS.
It was not nearly as cold as I feared, but man, the snow was really deep and running was tough. STILL, even in these conditions, I only took two short walk breaks, which is HUGE. 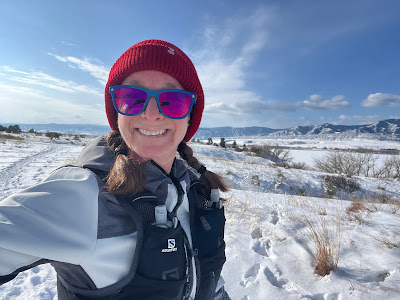 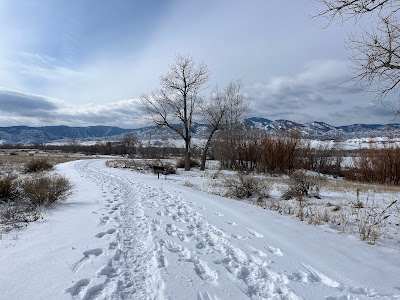 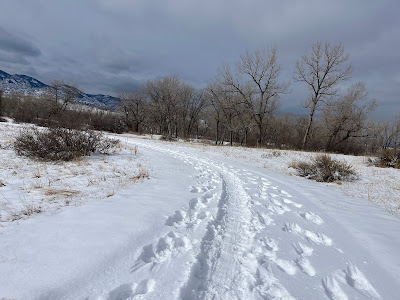 I decided I was not interested in doing the full 20 miles, and hopped on the road for a few miles, hoping that I could at least get miles in that way. Not knowing my way around the park that well I did end up back on the course. There was a 10 mile distance, so when I finished, I told Wayne to just mark me down for a "heavy 10 miler." For the first time in many years, there were still burritos left, which was nice because I was starving - I only ate a package of fruit snacks and some dried apricots on the run. It started snowing on the drive home. Freaking winter.
Ben and I made plans to get dinner together since A was working. We headed to Emilio's, and it was delicious. 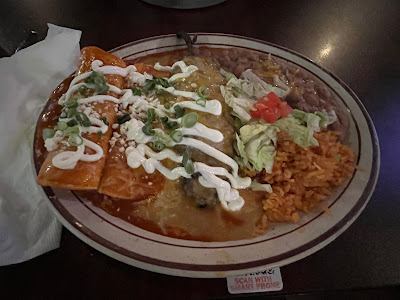 Sunday (31,049 steps) - Woke up ridiculously early so I could get my "real" run done. I had some overdue library books, so I made a detour to return them. Multitasking! 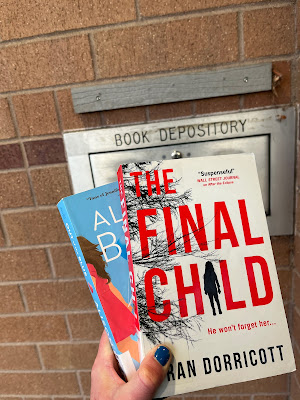 I saw the injured coyote that I haven't seen in at least a year on the trail behind the library. He was not interested in me at all. It was a nice sunrise, but chilly. Also, I was glad that I had worn my spikes. The snow/ice is just NOT going away. 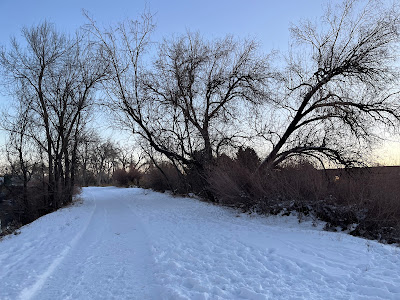 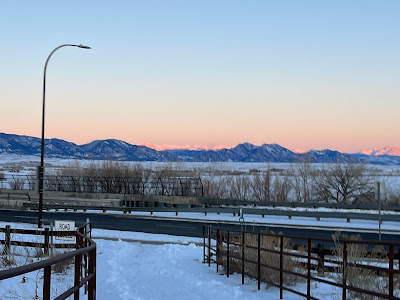 I grossly miscalculated my distance, and ended up running about a mile further than what I planned. I got home with enough time to use the bathroom, make a cup of coffee and threw Olive in the car so we could head to the Stanley Marketplace for the brunch run. I ended up run/walking with Pete and Janet, and Olive did REALLY well. Her longest "run" yet at 3 miles! 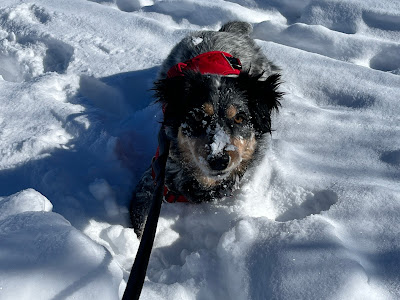 Most places at Stanley Marketplace don't allow pets, but Logan's, the coffee shop did. Olive was quite content lying on the floor while we had breakfast and coffee. 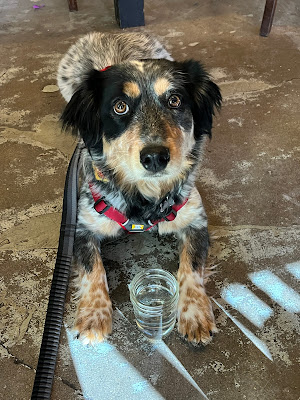 Took Olive for a walk later in the afternoon. Otherwise, no clue what I did. I believe A brought home queso.
Monday (21,055 steps) - Work from home! I clocked in early because I had my annual gyno appointment (blech). Closer to lunch time I took Olive for a short walk. Then, I had to get my hour run in. I can't figure out why the first couple miles I can keep my HR under 140, but then it suddenly spikes (usually on  downhill, without that much of a faster pace) over 160 and I have a hard time lowering. It does not SEEM like it is that much more work, and I realize that wrist HR is not as accurate. Either way, annoying. Also, still surprised at the amount of deep, chunky snow. 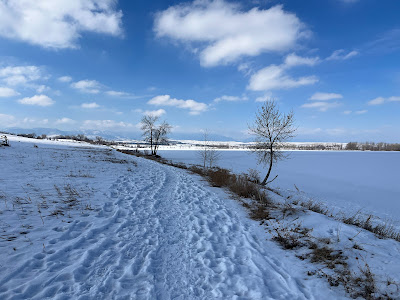