Tuesday - Up early for a Def Leppard Peloton ride, upper body and core. Work in the office, going for a walk at lunch. Literally nothing else, other than watching the finale of Ozark. Complete garbage.
Wednesday - My (44th!!) birthday! Unfortunately, I woke up feeling like garbage. My arms (especially my triceps) were super sore from the upper body workout I had done the day before. I was sneezing and coughing. Ben took a COVID test and it came up negative and my symptoms seemed more like allergies. I wasn't sure if I was going to do my run (mostly climbing goal), so I texted my coach to let him know I was going to play it by ear. Work was pretty busy, especially since I'm covering for Nicole all week. By the end of the day I wasn't feeling up to it, so I headed home after work. Ben invited Kristin, Doug, Jeramiah and Tyler over for pizza, cake and beer. Since we had cold-like symptoms everything was done outside. Hurray for finally some nice, spring weather. 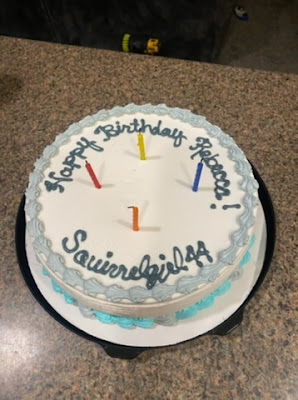 Thursday - Definitely was feeling congested and tired, so I was glad I was working from home. Once again, skipped my morning run. Didn't seem like a lot of fun to run 8 miles without being able to breath without coughing or sneezing. A was playing at the graduation, and we got 2/3 of the way there when she realized she had forgotten her viola (d'oh) so we had to go back to get it. I ended up being "late" for work. Work was relatively busy, and other than taking Pika for a (shorter than usual) walk, I did nothing.
Friday - We had SNOW in the forecast. We also had plans to go on our first camping trip of the year - which included allowing A to have a friend join her. We had packed everything up and figured we would make a last minute call if we thought it was a "good" idea to head up to the mountains or not. My drive to work was REALLY fast, there was no traffic, and it was only raining. It didn't switch over to snow until mid afternoon. We decided we would go for it... A's friend came over when she got off work, and we got out of the house about when we thought we would - and it was snowing pretty good, although not sticking to the roads. The drive out of town wasn't bad, and even the lower foothills were ok, people weren't driving too crazy but speeds weren't really that slow. AND THEN. We hit a slowdown right before the Georgetown exit. We sat and sat. There were no updates on any of our apps, and we couldn't figure out what the issue was. FINALLY, after about 90 minutes, we started to crawl forward, only to find out we were being route into town and off the highway. 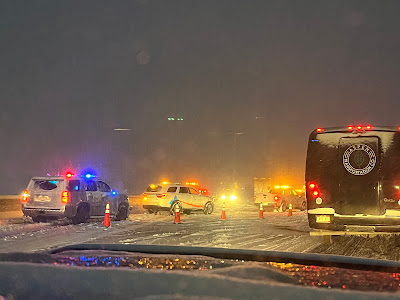 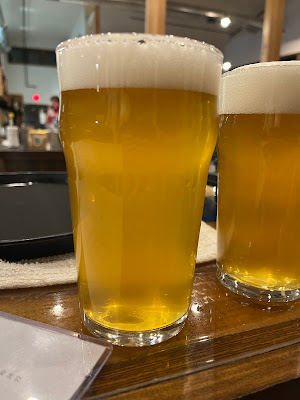 The kitchen was unfortunately closed, and we ran into the same general "rudeness" from staff that we have encountered the last few times we were there. We knew we weren't going anywhere at this point, and "luckily" we have Shelly and a cover on the truck, so it wasn't a huge deal to end up camping in the parking lot...
Saturday - I'm actually surprised that I didn't wake up at the crack of dawn. Maybe the stress of travel and last minute changes had me sleeping ok? It didn't take long to get everything ready to head out. 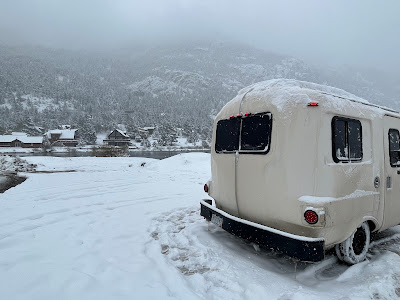 It was snowing, but nothing crazy and very little traffic getting into Frisco. All of us were hungry, so we stopped at Whole Foods for a burrito. Poor Shelly: 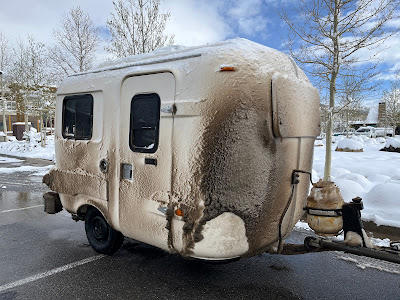 By now the skies were clear and it wasn't snowing, and looked really pretty out! We arrived at the campground and noticed it was "fairly" empty. The hosts found us immediately and were very nice and welcoming. (Also, they said they were from Georgia and this should have been declared a state of emergency, haha). We ended up with a REALLY pretty campsite! 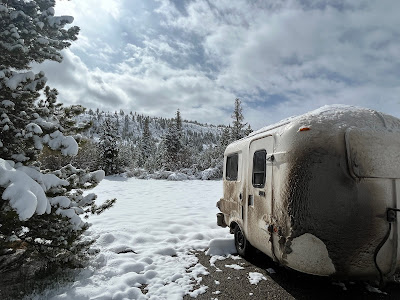 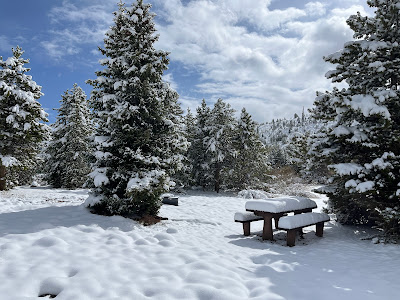 The girls took Pika for a walk. Our site was right by the perimeter trail, and even though we were the first people on it since the snowfall, we had no problems finding it. Pika was SO happy being out! 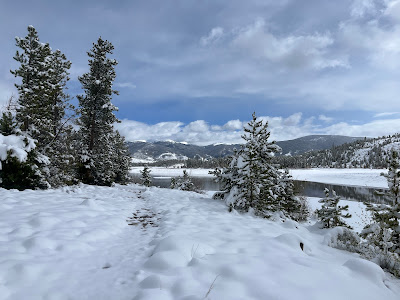 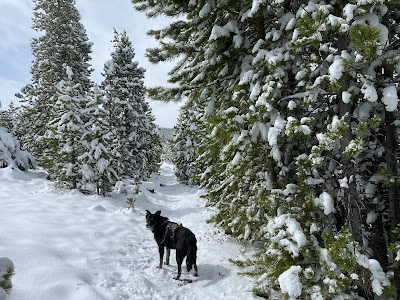 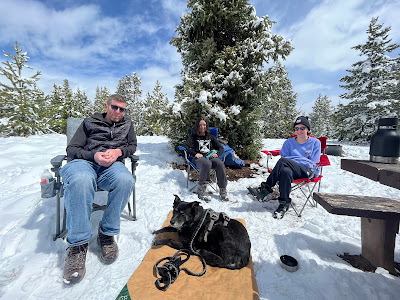 Once we were set up we decided to head out and actually DO something while the weather still looked clear, since there was MORE snow in the forecast. First, we headed up to Breckenridge to visit Isak. They DEFINITELY got a TON of snow. The hike up was single track through about 18" of snow! 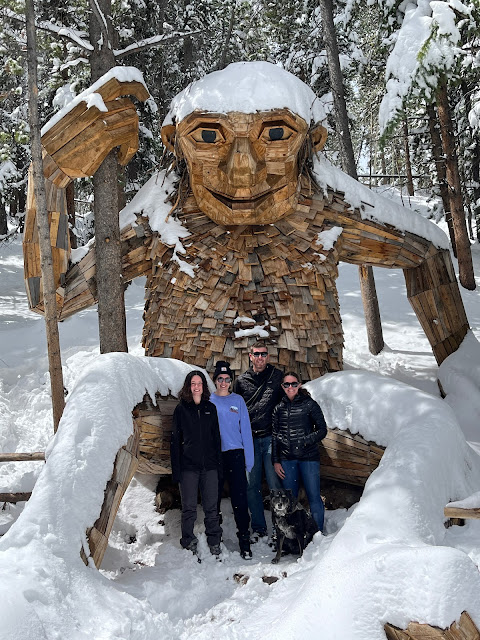 Then, we headed back to Frisco to pick up a handful of groceries we had forgotten, and a visit to Outer Range. The girls went to Whole Foods for pizza. 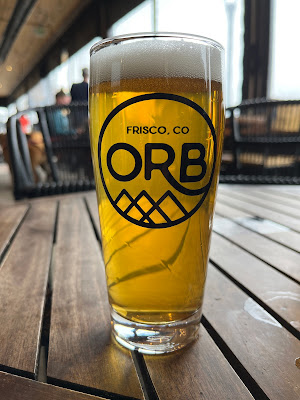 Back at the campsite to start getting ready for dinner. We planned (and by we, I mean Ben) on hot dogs and potato salad. The weather held up right until it started to get dark out. 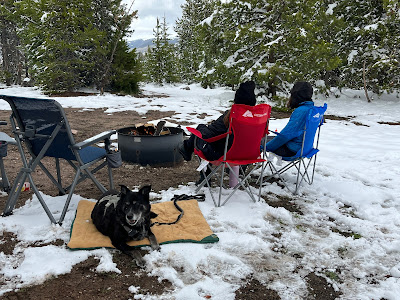 Temps really dropped, and since there were no fire restrictions, we made a huge fire! A is pretty proud of her fire-making skills - thank you, Girl Scouts! 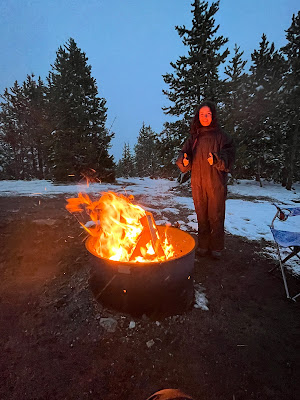 We roasted some s'mores, although that proved a bit problematic since the marshmallows were partially frozen, haha. 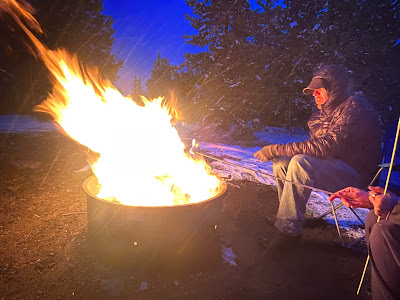 The snow really started to pick up again and it was getting cold, so we all retreated to the camper. Somehow all four of us PLUS Pika were able to fit on the bed for a few wild rounds of Uno.
Sunday - Somehow, we ended up sleeping until 8?? Crazy. The sun was shining when we exited the camper and Ben and I took Pika for a short walk. 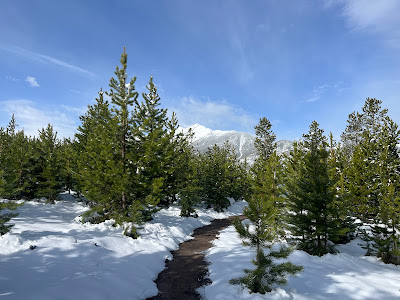 Ben and I headed into town to get coffee, and stopped at the store to pick up a few more ingredients for breakfast. Ben made burritos! By the time we finished eating it was unfortunately already time to start packing up to leave. We opted to stop at Outer Range for another beer (and more Uno) on our way out of town. 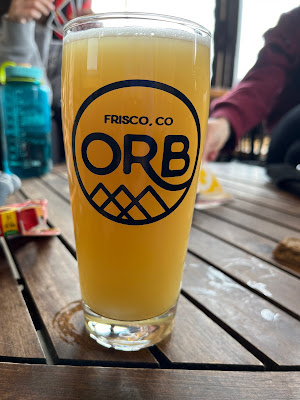 Since the weather had been so icky all weekend there was ZERO traffic getting home, which was nice. We unloaded everything and investigated the small amount of damage we had from the storm. We lost a small branch off the tree in our front yard, but most of the debris was actually from the neighbor's tree. We unpacked and popped some pizzas into the oven for dinner. We tried to finish off the s'mores with a campfire but all the wood was damp and it was SUPER smoky, so we gave up.
Monday - Time to get back on track with training after being sick for a week. I'd already talked to Greg about not doing as many miles as was on schedule (9 seemed like a LOT), so he lowered it to 5. 5 sounded reasonable. I didn't have to get up crazy early because A's friend had spent the night and said she would take her to school. I finally saw one of the owls!! 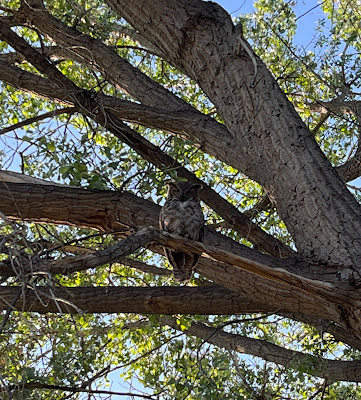 I was taking it easy, and the run was going fine until I really had to use the bathroom. Luckily, this seems to happen to me fairly regularly when I get up early to run, so I plan my route around a bathroom, haha. Once that was out of the way the rest of the run was pretty good. It had been sunny when I started but gradually got cooler and the clouds started to roll in. I was a bit worried I was going to get rain on!
I got home with enough time to take a shower before logging in for work. Ben headed to Dunkin to pick up my free birthday drink. Managed to get laundry done and the house cleaned up. After work we headed to the school for A's end of year track banquet. We were bamboozled into thinking there was food. All they had was desserts. Boo!! We had to improvise dinner and didn't eat until 9. Ugh!!
Stats:
at May 24, 2022