Tuesday (9,378 steps) - Got up early and did a bike boot camp before going into the office for work. These are always SO HARD. Went for a walk at lunch. When I got home did a half hour on the rower while watching... Dawson's Creek! So happy to see it available for streaming, haha.
Wednesday (24,370 steps) - Work in the office. Left work a few minutes early to go to Boulder for my "2 hours" on trails. I had mapped out a pretty cool route that had a few segments I hadn't done before. With the snow we had gotten on Monday I was REALLY surprised to see the trails were in pretty good shape! 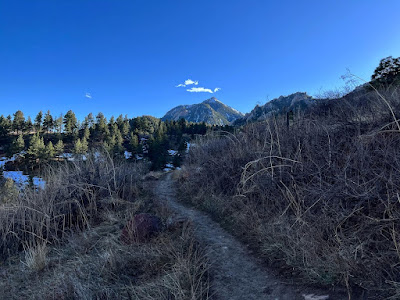 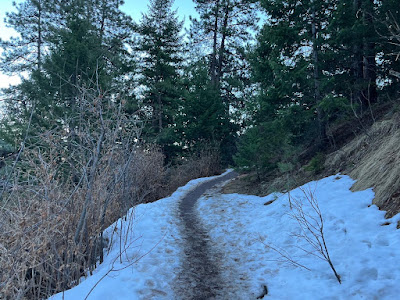 There were very few sections that had snow and ice - which was nice! 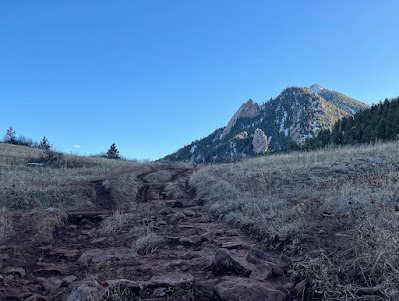 It had been a few months since I had been out and doing "really long" stuff - and the last time I still had to use my headlamp. Going up Fern was a little sketchy, but it seemed to go much faster having poles and still being light out. 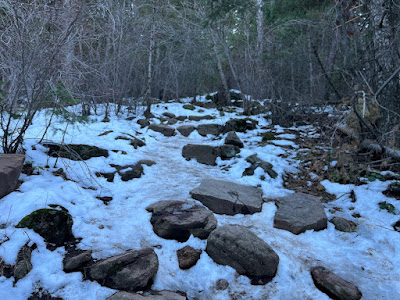 I was definitely glad to have some sections that were not as technical to run down (and up) as I'm still babying my foot a bit and it seems like I roll my ankle EVERY TIME I run where there are rocks. 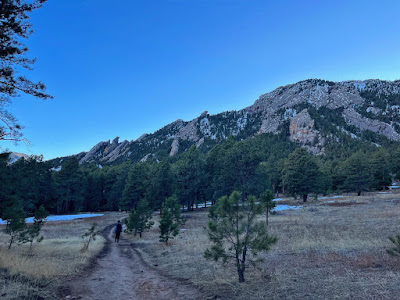 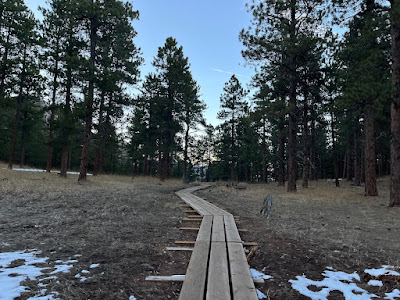 By the time I got to Bear I realized the route was going to take me a bit longer than expected, but I got to see a pretty sunset! 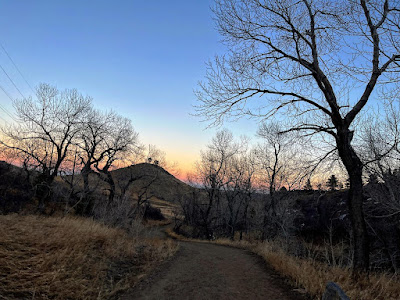 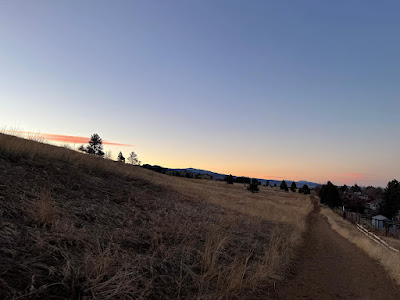 I had hoped to visit with everyone at the store, but when I drove by it was dark. Sad! I might try to get out of work a bit earlier on Wednesdays so I can still see people after my run/hike. I got a few minutes away from the store and thought that maybe I had left my headphones on my roof?? I pulled over as soon as I got the chance and... I HAD. AND SOMEHOW THEY WERE STILL THERE. I had driven probably 5 miles (?) and they were STILL THERE. 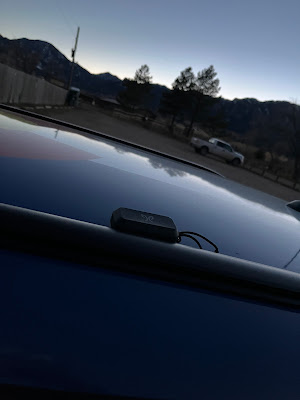 Did a yoga video then it was time for a (late) dinner - and Ben and A had waited for me.
Thursday (9,590 steps) - Work from home! Took Pika for a walk at lunch. 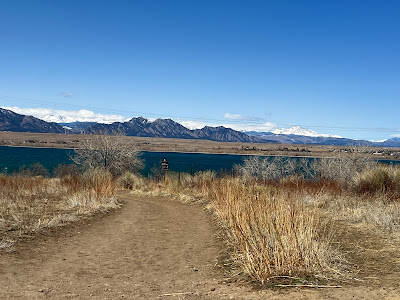 After work I did a (very long) Peloton ride. Ugh - doing anything low impact on the bike is NOT my favorite - I find it boring and hard. Plus I used a new instructor that I didn't care for.
Friday (12,496 steps) - Wash Park and coffee with the gang before going to work. Ben mentioned that we should do something since it was our 18 month wedding anniversary. We headed up to Westminster Brewing, where Tyler met us for a bit, and then picked up Qdoba for dinner.
Saturday (48,734 steps) - Up early(ish) for my long run of the day. I had five hours planned, and I was hoping to do the Dirty Biz loop that had been closed since the Marshall Fire. Really excited to wear a new pair of adorable Zensah socks! 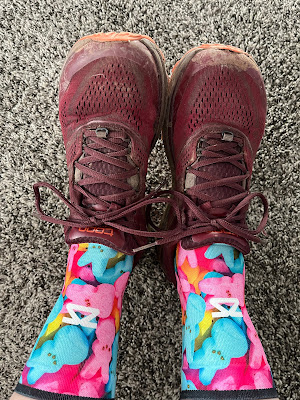 Parked the car much later than planned, nearly 8:30. It was "warm," but not as sunny as I expected. Almost immediately, I was having some GI distress, but "lucky" for me, I typically plan this route so that I can hit the bathroom fairly early. Always frustrating to have to walk some of the "easier" parts of this route though. 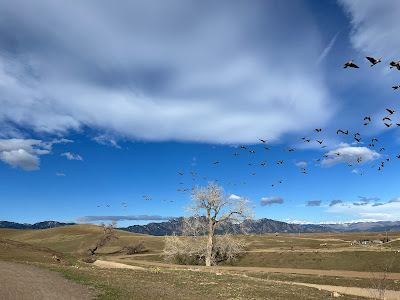 After using the bathroom, I headed west - and the wind was NUTS. I usually walk quite a bit in this section anyway, but the headwind was BRUTAL. 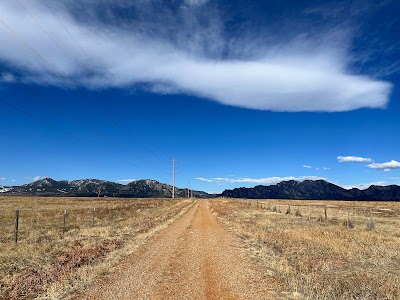 I was not happy in this section. I even sent Ben a video of the wind so he would know that I wasn't being dramatic about it. The below picture shows my twangers standing up on end, if you look close. Ugh, wind. 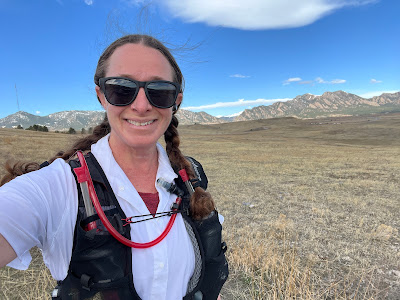 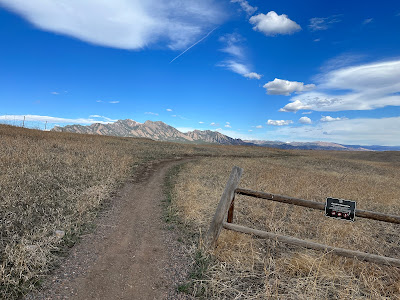 It's been a decent amount of time since I've run out here, and I had sort of forgotten a). how bad the wind gets and b). how much I dislike all the bikes on the single track. It's also a fascinating phenomena that 50% of bikers don't seem to have the ability to let you know they are coming up behind you. I only wear one ear bud on these trails so it's not like I couldn't hear them if they said something. 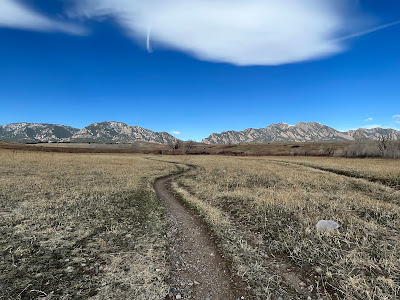 I was REALLY hoping the wind would die down, and after crossing 93 I made a quick detour to the bathroom - since it was there. I also briefly stopped to dump sand out of my shoes, but there really wasn't much there. I really should just wear gaiters all the time I am on trails. 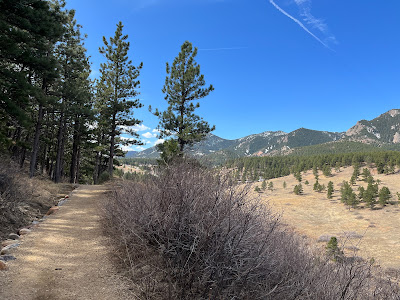 Once I got away from Dowdy Draw and went up towards the Spring Brook Loop things seemed to clear out a bit. This was really the only section of the route that had a bit of mud and some sections in the shade where there was actually some slush left. 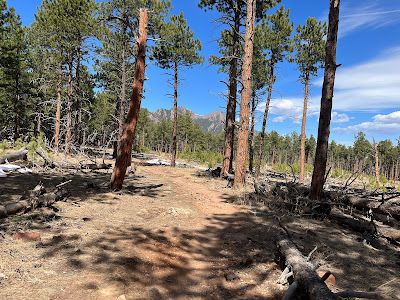 I was right, that at some point the wind wasn't as bad and I ran a bulk of the way to Community Ditch. I had loaded up my pack pretty full with 3L of water, as well as a lot of gear I plan to carry for Cocodona. ALSO, I have suddenly been struggling with fueling properly, so on this run I also was setting an alarm for every 45 minutes to eat something. I was only getting in about 100 calories each time. I'll want to bump this up for next run. Saw my first cows at 16+ miles in - which is crazy! This baby was cute. 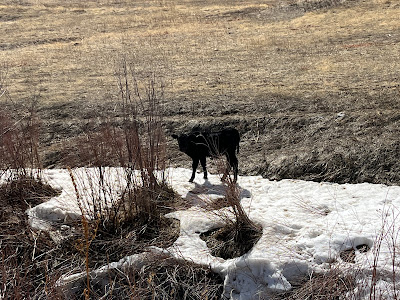 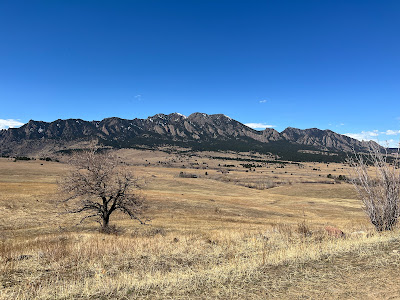 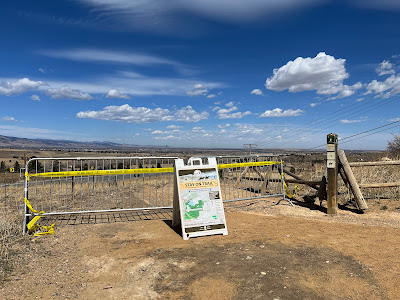 I hadn't been on this section of the trails that were in the burn zone. LOTS of damage in here :( 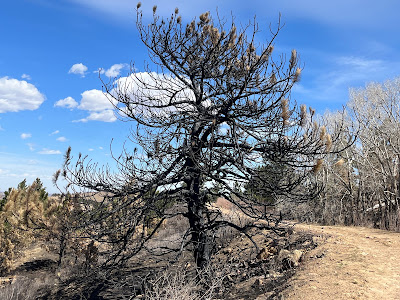 The rest of the run actually went REALLY well. I did a lot more running and ran negative splits for the next 5-6 miles. 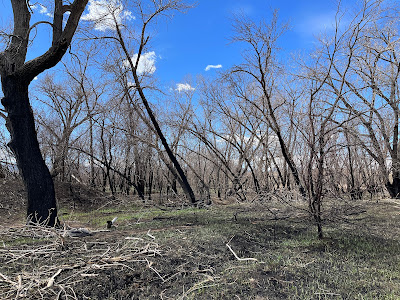 Some of the worst damage was actually really close to where I had parked, just a bit northwest. Definitely shocking to see the damage to places I've run so many times. 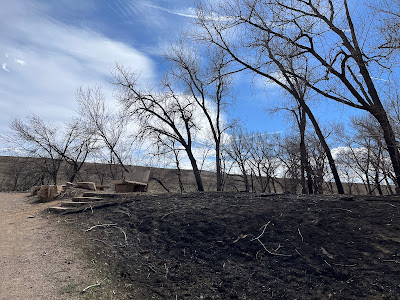 Ben messaged that he had a stop to make in Evergreen, so I headed home to take a shower and get something to eat. Since A was at a friend's house we went up to 4 Noses for a beer. We ended up sharing a table on the deck with a really fun couple! (We are even Peloton friends now, haha). Picked up pizza for dinner.
Sunday (7,626 steps) - Slept in! Was doing some random stuff around the house when I remembered (sadly) that I had a long Peloton ride to do. I don't know why, but the 75 minute mark seems impossible - every time. I was also supposed to do low impact, so I did a power zone endurance ride on mute and just watched a movie on Netflix. Took Pika for a walk and then met Ben at New Terrain. Tyler came over for happy hour.
Monday (18,556 steps) - Work from home. Took Pika for a walk at lunch. I had 6ish miles on schedule and had to do it after work - when it was 76 degrees. 76! (That's literally 40 degrees warmer than last week). I just felt totally blah during this. 2 miles warm up, 10 intervals - with my fasted pace being 8:50 - and that felt pretty damn hard. My recovery wasn't great either. Last week I jogged all but two of them, I think I only jogged 1-2 TOTAL. Weirdly, though, my overall pace was only a tiny bit slower than last week. I really hope that after doing this for a while I will get back some of my speed that I lost... ten (?) years ago? Dinner and Ozark.
Stats:
at March 29, 2022