Cocoa Beach, FL
Sunday, November 28
Half Marathon #191
Weather - PERFECT!
Heather and I had been talking about this race for 10 years. Ten. She signed up earlier this year, and of course I had to invite myself along to join her. I asked Ariel if she had any interest in also racing, and she said "sure" - mainly because we were planning a girl's weekend and she thought that sounded fun.
Expo
The expo was being held outside, the same location as where the race start was. We didn't have a lot of luck finding parking, so once we were walking around we made sure to look at the map to find out where the best lots were to park in for race day. We got our packets, which included our GINORMOUS medal - apparently this was the 50th anniversary of the race, so that was neat. We found out that we got free beer, so we each had one while we walked around. Nothing of excitement for us, so we didn't spend a ton of time there.
Race Day
With four people in the house needing to get ready, we got up earlier than I would have planned. Based on how the morning went, it was good that we were up early. I had a bagel with peanut butter and some coffee, and we were out the door a few minutes earlier than planned, around 5:00 am - since our goal was to be parked at the mall with enough time to catch the last shuttle bus that was leaving at 5:30 am.
We got a few minutes away from the house when Ariel said that she had forgotten her shoes. I thought she was kidding, but she wasn't, so I turned around. She ran in and got her stuff and then we headed back out. We got about 10 minutes away from the house when Ariel says she forgot her bib. OMG. This time I'm a bit more agitated. We go back to the house AGAIN, and this time she assures me she has everything. We actually arrived at the mall with a few minutes to spare, but we are wondering why there are 3-4 buses and only a handful of cars. Either way, we get on the bus and are dropped off with plenty of time to spare. We got in the bathroom line while Ariel did bag drop.
The north course and full marathon had a time of 6:00, but we didn't start until 6:20. We had gotten back in line for a second bathroom trip, but Ariel was worried about starting on time, so I walked her to the 2 hour pace group and wished her luck. She has been training so hard all season, I'm glad I convinced her to run alone with a pace group than slum it with me and Maureen. 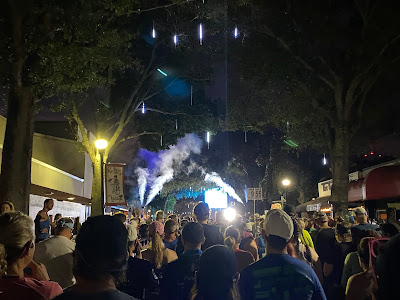 We actually started a few minutes early, so it was a good thing that we had gotten to our corral a little early. Steph had in my plan to take it easy and warm up for the first two miles, so I didn't feel bad at all for stopping briefly after the first turn to take a picture of the sunrise - it was gorgeous. 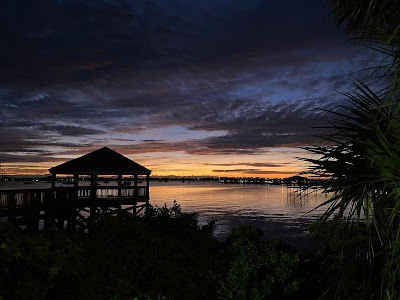 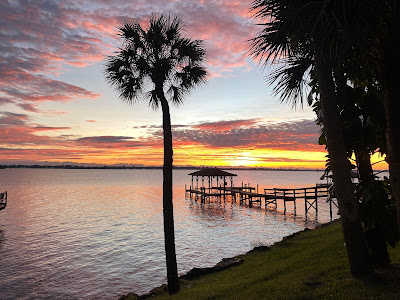 When we signed up we put 2:15 as an estimated finish time, but I'll be honest and say that I had hoped to run closer to 2:10, or possibly match/beat my time from Poland, which I believe was a 2:08. It wasn't in the cards for the day, but that was ok. We ran pretty relaxed, walked all the aid stations, took beer a few times on course (plus a Bloody Mary shot) and even used the bathroom once. I was pretty surprised when we saw Ariel running with the 1:55 pace group! She looked happy and relaxed.

The miles flew by with chatting and admiring the mansions that lined the road on one side, and the private docks on the other side. I don't know what I expected from the race, but I was really impressed with the course overall, and enjoyed the trees and quiet residential atmosphere, along with the water. It made for a very enjoyable course!
Once we hit the turn around, the weather actually seemed to improve. It was still overcast and there was a slight breeze, so the conditions were basically perfect for running. We actually picked up the pace towards the end - even running mile 13 at a sub 10 pace, and sub 9 pace for the "sprint" to the finish. Mo had a bit more of a kick than I did, and beat me by a few seconds.
Overall, I felt really good during this race. With all the trail running I have been doing, I haven't been running roads/flats very consistently, so while I'm a tiny bit disappointed in my pace, it probably couldn't have gone much better. 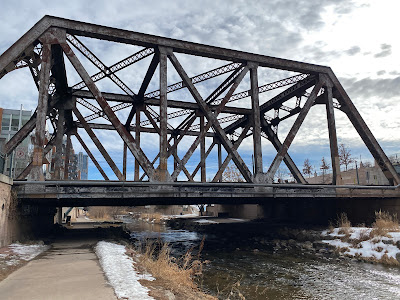 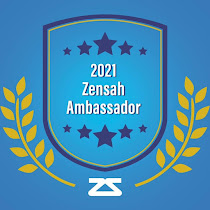