Tuesday (20,374 steps) - Legs were tired after the trail race and lower body video. However, I forced myself to get out of bed. I'm in limbo with no training plan right now, but I had a goal of 5 miles. Legs were NOT cooperating and I did 4 miserable miles. 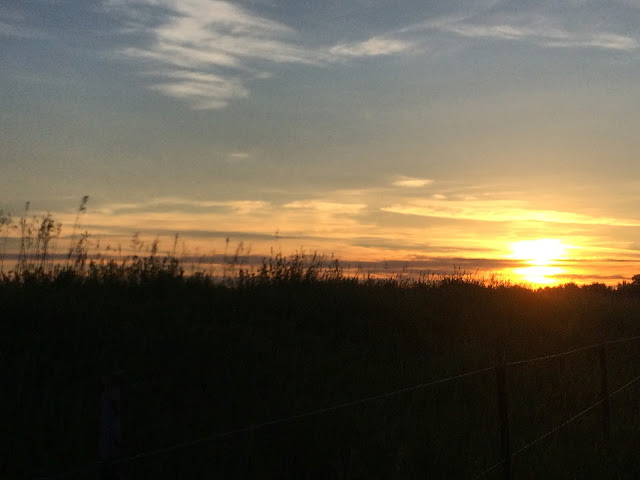 Made it home with enough time to do an upper body video. After I picked up A from camp we went to Hu Hot for dinner because I had a parent meeting with A's scout troop. The meeting ended up lasting almost 2 hours, but I think it was very productive and I'm pretty excited for what is in store for the girls next school year.
Wednesday  (17,747 steps) - EXHAUSTED. Got up with enough time to do a pilates video and a new-to-me abs video that I liked. Run club - which THANKFULLY, was way cooler than forecasted. 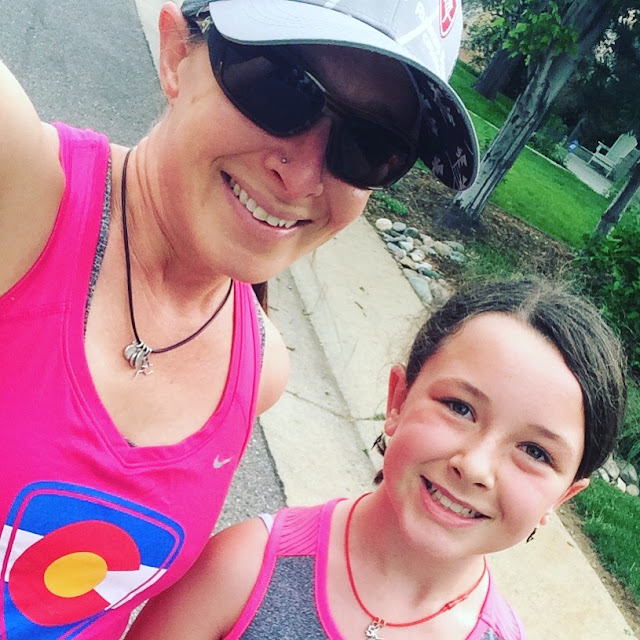 Heather met up with us for dinner at Noodles.
Thursday (19,297 steps) - Went for a 3+ mile run by the lake at 6:15 in the morning. Felt incredibly hot and humid and sunny. Blah. 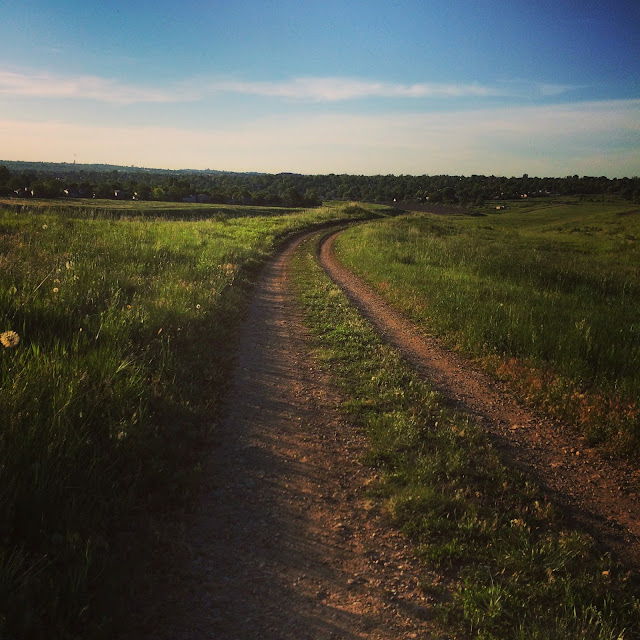 We arranged for A to go to gymnastics right after camp at 5 pm so that we could go to Ladies' Night at Runners Roost. Seriously one of my favorite events! 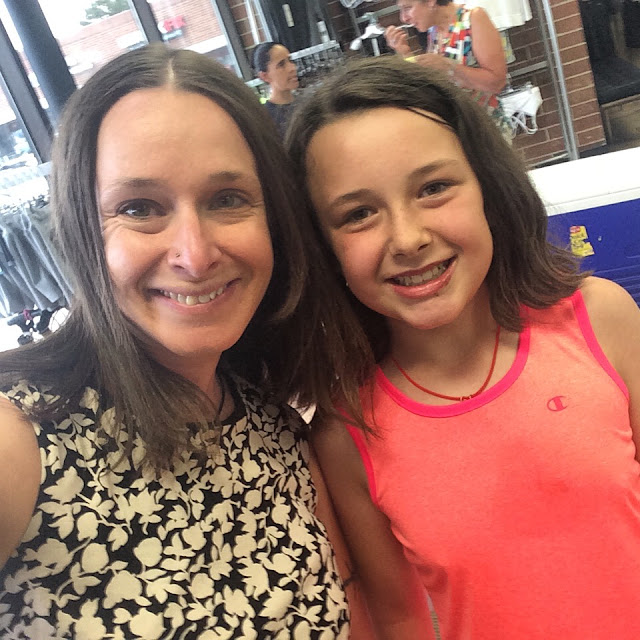 We got awesome discounts on Lole gear, there was ice cream (I had salted butterscotch!) and Nuun with champagne. Fun night! We went to Hacienda for nachos with Heather and Maureen. (Seriously, weight gain is a mystery). 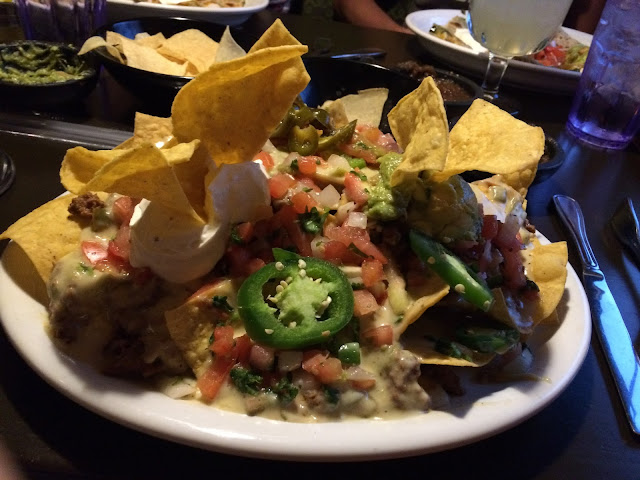 Friday (15,527 steps) - REST DAY!! We had happy hour at work, which would have been more enjoyable if I hadn't been bombarded with work right at the end of the day. Finally, A and I had a "night of nothing" - other than picking up groceries at Target.
Saturday (22,790 steps) - Runners Edge summer kick off! Drove down to Denver, wishing we were starting earlier than 7 am. So hot and sunny! I ended up running 6 miles, all of which felt pretty good.
Chatted with Doug and Lisa at the store for a bit, got gas and a car wash, then drove to Golden top pick up my packet for Revel. Managed to get to the expo right when it started and was in and out in a few minutes. My tire light has been coming on somewhat regularly for the last few months so I stopped at Big O and had them look at it. Turns out I had a huge concrete nail in it. Maybe THAT'S why the light keeps coming on... They also said I need new tires soon. Of course I do. Got home, quick shower, lunch at Tokyo Joe's, and then picked up Rose and Madi for the Rockies game. We had great seats, but unfortunately we were in the sun. With it being 93 degrees, the seats were literally burning us! We kept moving around throughout the game trying to stay cool. It was a pretty good game - Rockies won! 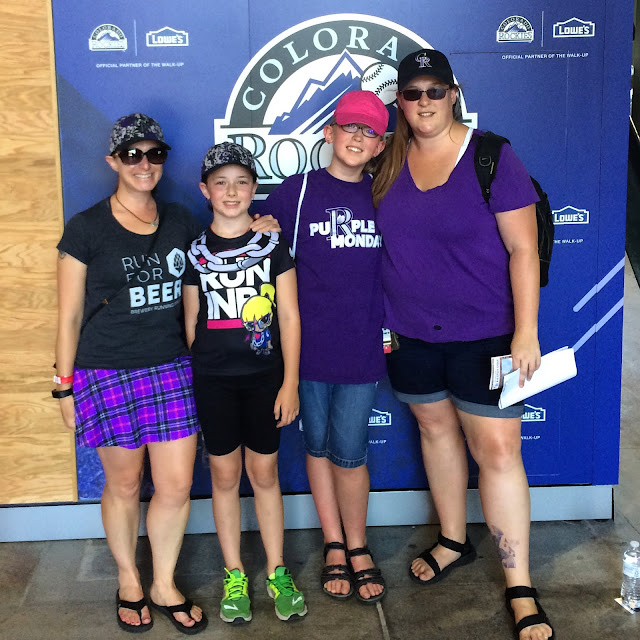 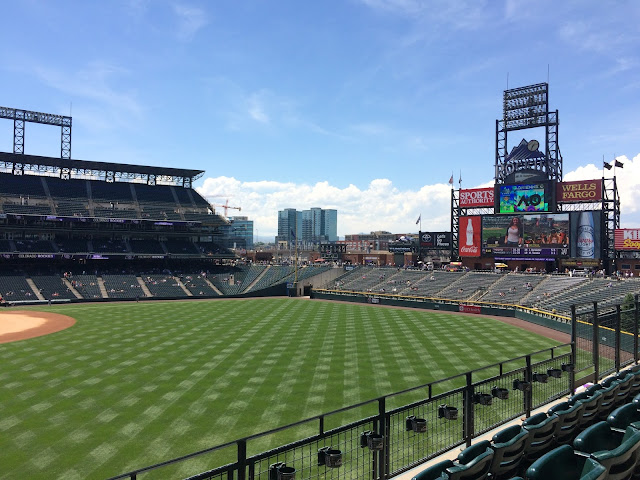 For dinner, A talked me into going to Godfather's pizza. The wait wasn't that long and we devoured a BBQ chicken pizza. So good, but pricey.
Sunday (34,360 steps) - Revel Rockies half marathon. 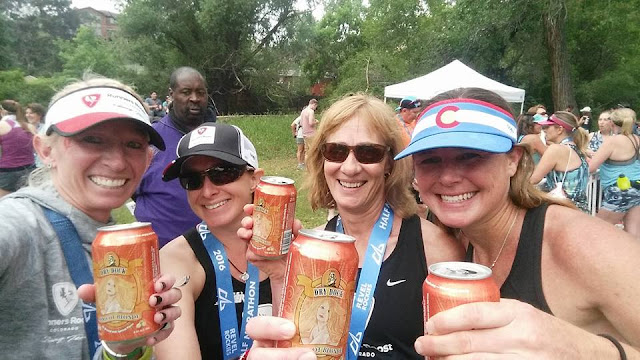 After I dropped off Maureen, A and I headed home. She'd had a few donuts for breakfast and wasn't hungry. I took a shower and had a frozen dinner to tide me over. We drove to Heather's house to go to yet another Rockies game. It was in the mid 80's, but felt much cooler than the last game. We had brunch in the clubhouse and then watched the game. Rockies won again! 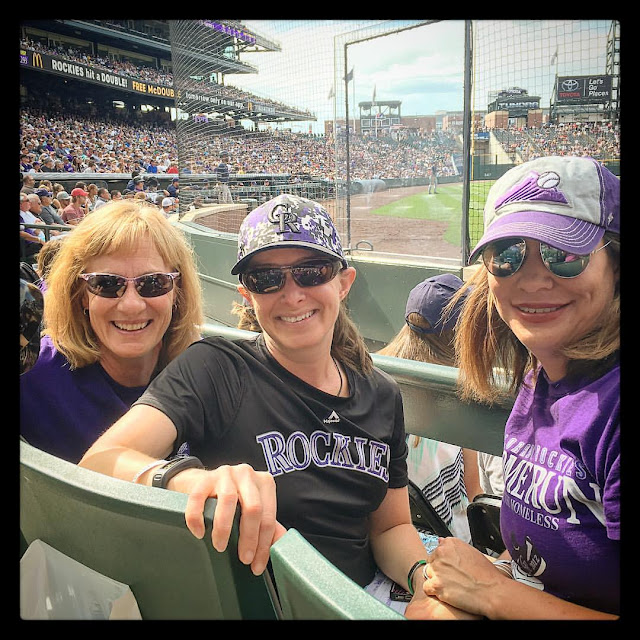 Spent a few minutes at Heather's house, but we were exhausted so we went home, stopping to pick up a few groceries on the way home. I fell asleep on the couch around 8 pm. So exhausted!!
Monday (16,638 steps) - Slept until my alarm went off, which is rare. I still had a slight headache when I woke up, even with going to bed ridiculously early. A started a new summer camp this week so we had to be out the door by 7, therefore, no morning workout. Too tired for a real workout so A and I did some yoga and a new abs video (that I didn't really like all that much). 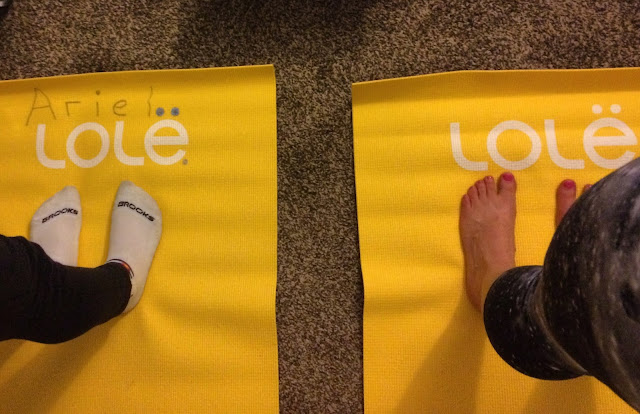