Tuesday (18,955 steps) - With A having to be at camp super early I haven't even been bothering with getting up to work out. Sleep is more important! Super slow short run after work. Still having some pain in my left groin, and thighs still very tight from Revel. 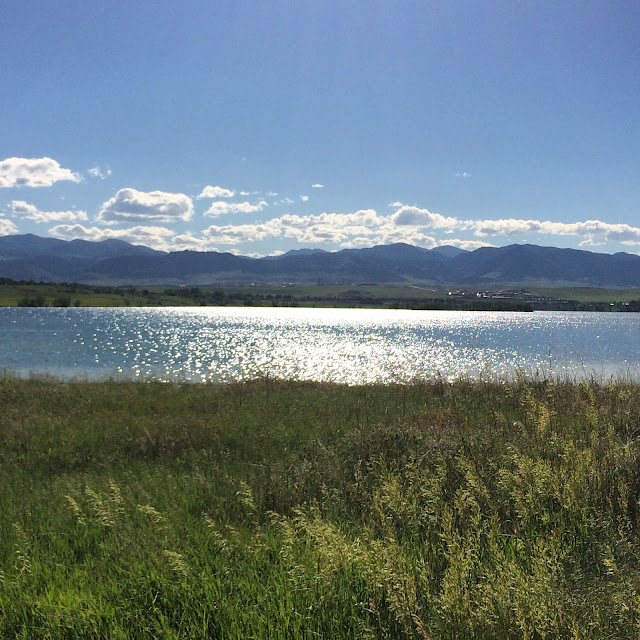 Also did a short barre video and an upper body tabata video that I haven't done in a while.
Wednesday (24,004 steps) - It is a ZILLION degrees in Colorado right now. With A getting out of camp before 4:30, we headed right down to Runners Roost and got there just after 5. We planned on doing our run early since there was a fun event planned. We barely made it our 3 mile loop. The heat is so draining! 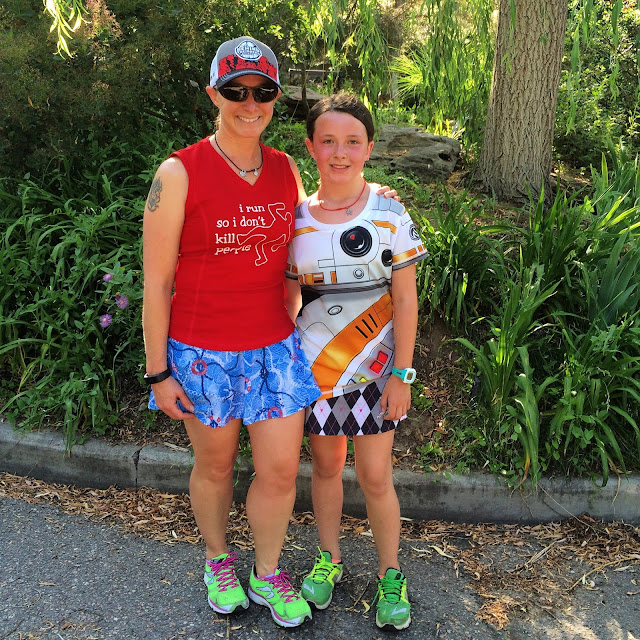 We got back right at 6 and met up with Maureen to walk Colfax and his friend, Ty. Then it was time for the real fun, the Brooks "Sip and Paint." I haven't painted in MANY years, so I was looking forward to it. (Well, the painting and the catered food and drinks). Such a fun night! I don't think I really followed the instructions all that well, but I think our paintings are pretty awesome. 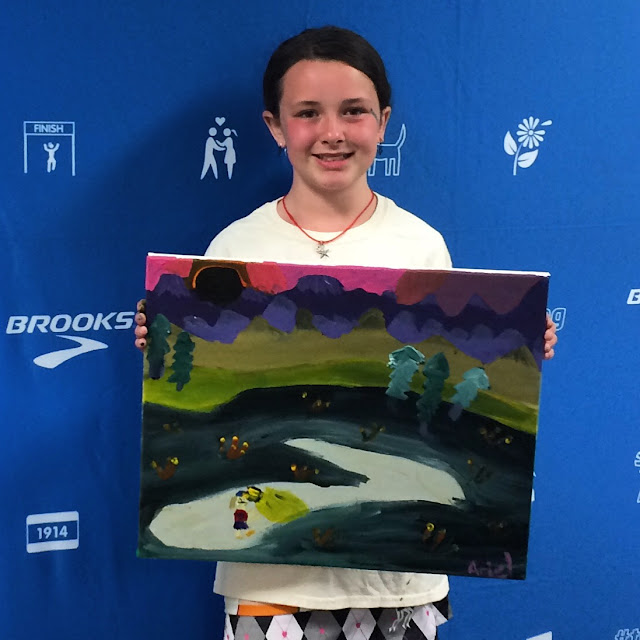 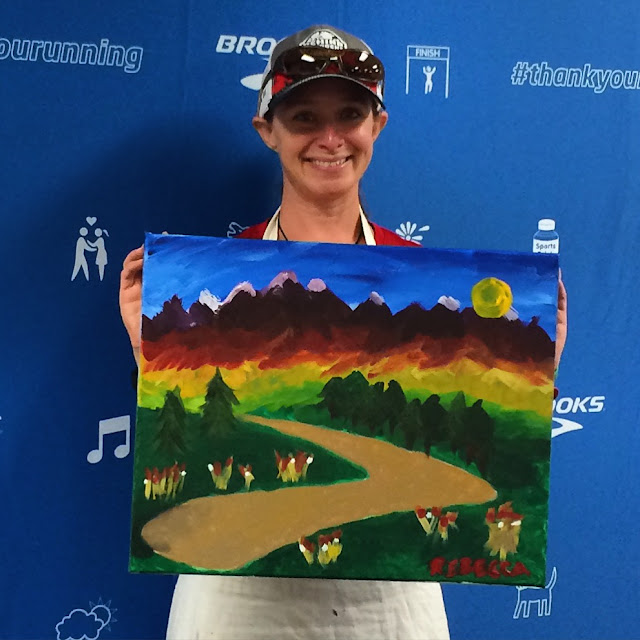 A was awarded the "Run Happy" award. Bed as soon as we got home (which wasn't until 9:45!)
Thursday (25,210 steps) - I set my alarm to run in the morning. HAHAHAHAHA. Went back to bed. So then, I had to do my run AFTER work. My phone says it was 90 degrees, but it seemed MUCH warmer. Now that the signage is up for the new "Rocky Mountain Greenway," I wanted to see where exactly the trail goes on the north side of the lake. It was hot, the run did not go well. 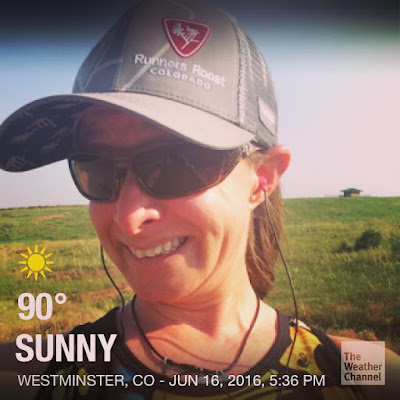 Thankfully there were bathrooms near where I turned around. Made it home with just enough time to shower before taking A to gymnastics. Tokyo Joe's and early to bed.
Friday (18,910 steps) - Rest day!! After I picked up A from camp we headed to the mall where I picked up a few cute dresses from Banana Republic and some shorts on sale from Lucky. "Mom shorts," according to A. Basically shorts that have longer than a 2" inseam. Grocery shopping and TV rounded out the evening.
Saturday (41,138 steps) - Even though it is summer, A had yet another Girl Scout event late morning. That meant that in order to get all my scheduled miles in, I had to head down to Aurora at FOUR IN THE MORNING. Well, 4:15 to be exact. It already felt hot and muggy to me, and I wasn't feeling great. All week I've had kind of a nagging pain in my left hip/groin area. I was running slow and trying not to run with an awkward gait. Ran 5 miles before meeting up with the rest of Runners Edge. 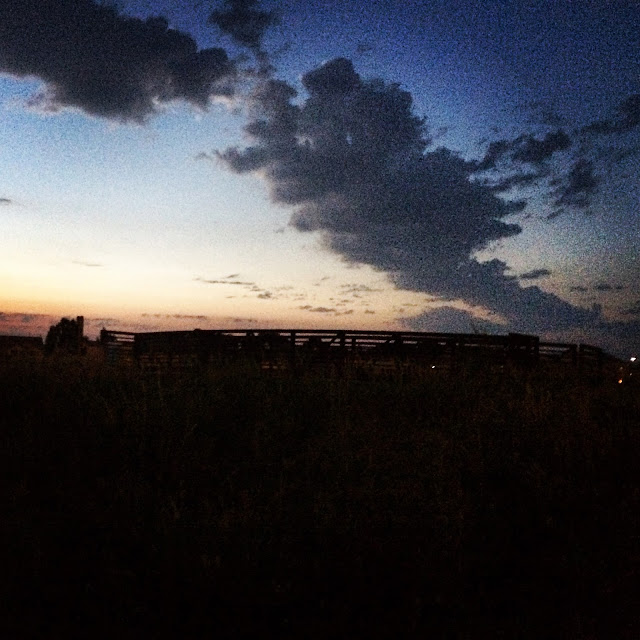 Heather and I had plans to run 10 more, but with as slow as I was going, we ended up only doing 9. Oh well, 14 miles is my longest training run since... March? I'll take it. I had just enough time to drive home, shower, grab A, pick up breakfast at Einstein's and meet up with her Girl Scout troop at Elitch's at 10 am. I was pretty disappointed with the Girl Scouts, there was only one table of activities, which they finished in less than 10 minutes. With that said, it was a ridiculously hot and sunny day (mid 90's?), and the park was actually not that crowded. 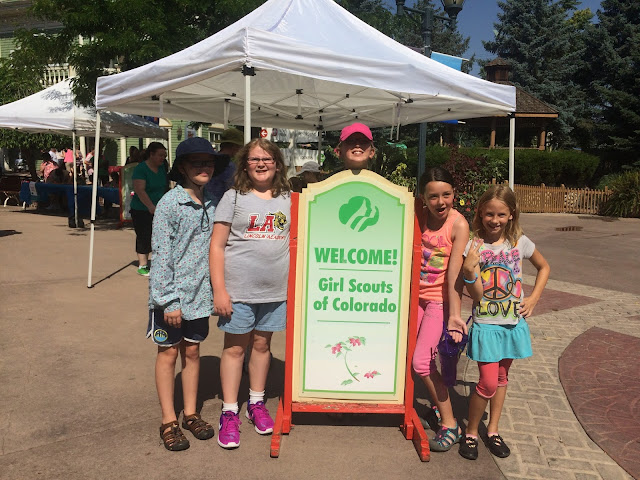 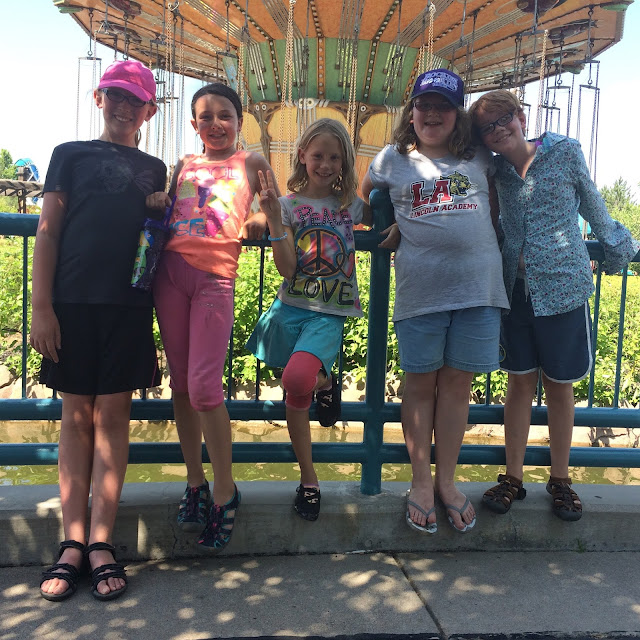 We ended up staying until about 3:30 in the afternoon. Other than the roller coasters, most of the rides didn't have long waits, so they actually got to go on a lot of rides. Spent the remainder of the day in the air conditioning. Oh, summer.
Sunday (23,523 steps) - Up at 6 am, arriving at Lair o' the Bear just before 7. A and I did 7 miles - her longest "fun run" yet (her words, not mine). 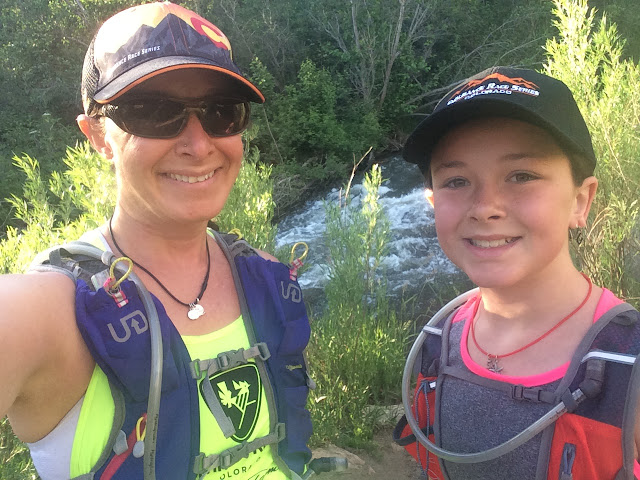 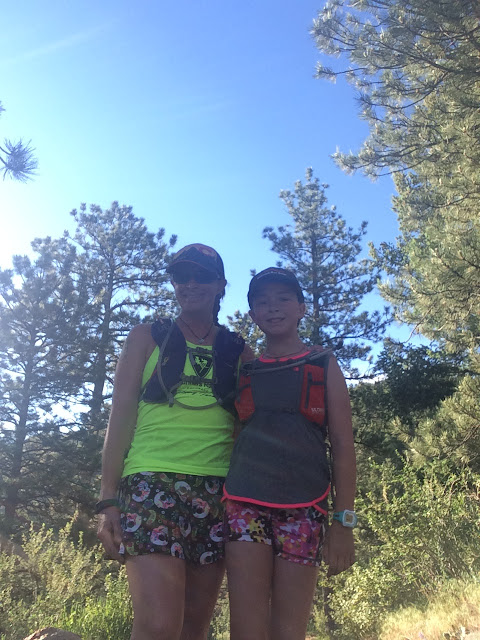 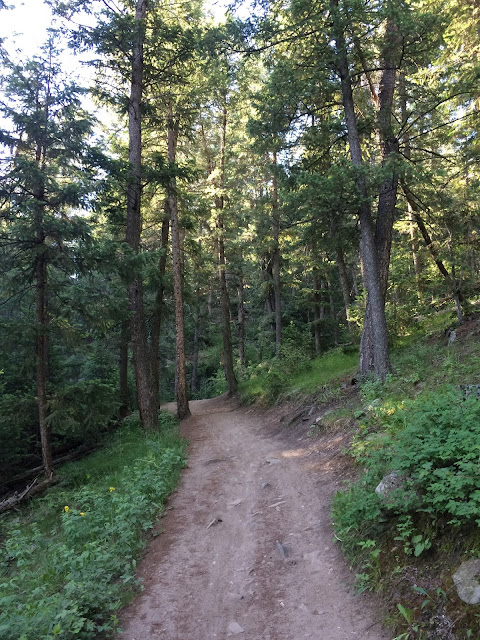 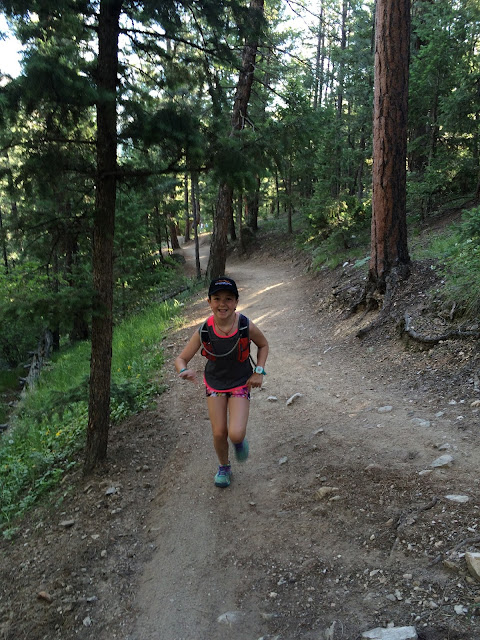 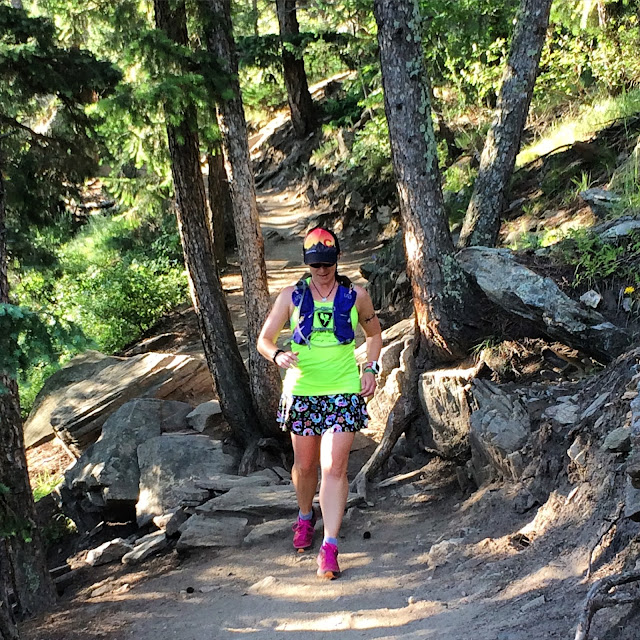 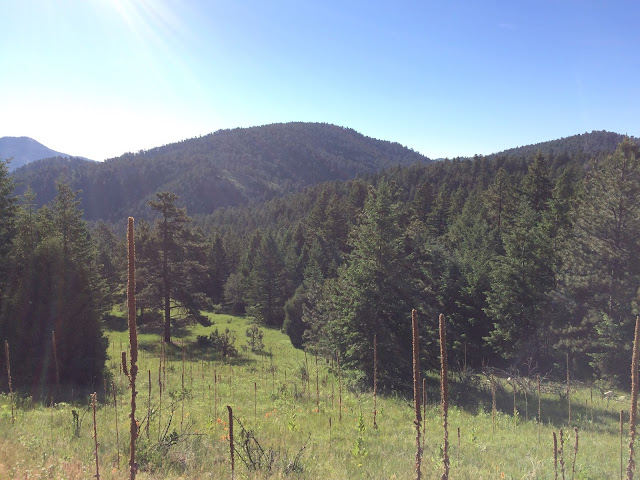 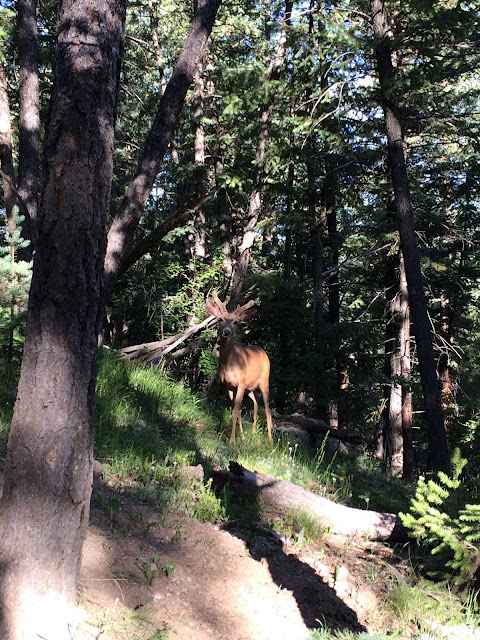 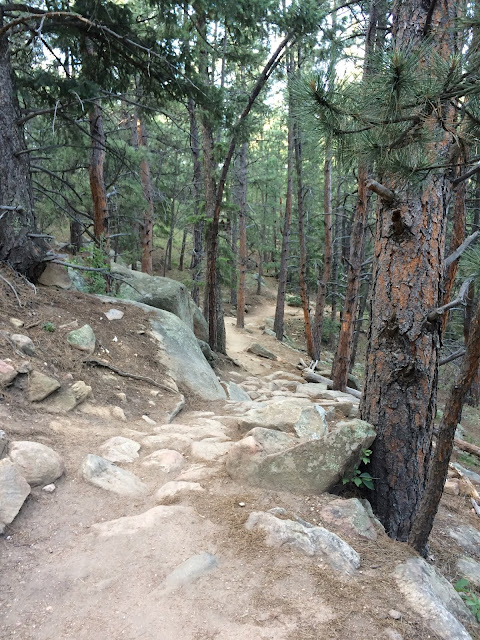 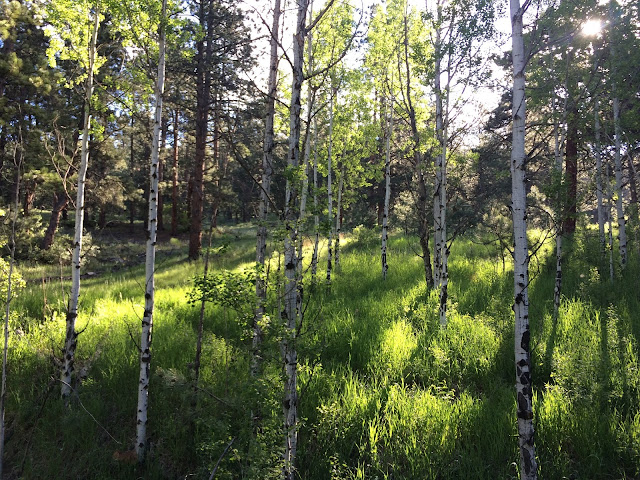 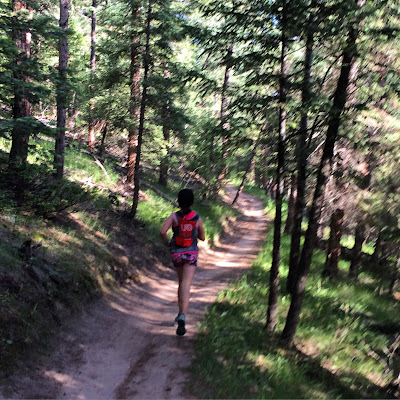 It was a gorgeous run, but already hot by the time we got back down at 9:00. Went to breakfast at IHOP (for pancakes, of course), and then most of the day on the couch. Did some cleaning, a yoga video with A, and then we went to Jessa's house for a few hours.
Monday (21,282 steps) - Heather decided to do one of the 8 week #FB30 programs. I offered to join her. Normally, I don't do the first day of the programs because it is a "fitness test." We decided it might be "fun" to do the fitness test. I told A that one part of the test was a timed mile. She wanted to join me (obviously because she knows she can run faster than me). We got up early, jogging to the middle school to run on the track. The entire jog over my hip/groin was aching. I was dreading the mile. It was just as awful as I anticipated it would be. Well, all but maybe the first 15 seconds. I was able to maintain a sub 9 pace for the first half mile or so, but barely finished in 9:27. Shameful. Back in the day, I could easily run that pace for a whole half marathon. It felt like an "all out" effort, which is really the point. Meh. (A, by the way, walked a few times and finished around 9 minutes, and said it was "easy.") 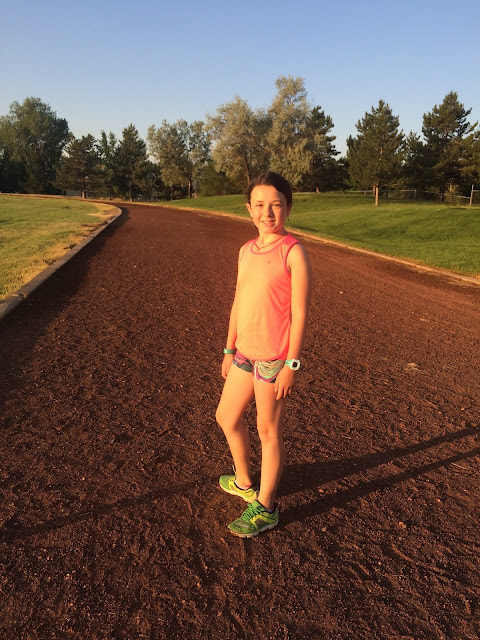 Walked back home, and did the rest of the test - push-ups, squats, static plank, and sit and reach. For "funsies," I also took some measurements. Nothing else the rest of the day.