Tuesday (29,264 steps) - Now that I have a training plan again, back to regularly scheduled training. I had 7 miles on schedule, and was feeling very apprehensive about my hip/groin. It is tender/uncomfortable even when I'm walking. I was out the door by 5:15, which gave me plenty of time to take it slow. I hit up the Rocky Mountain Greenway again, which was a good choice. 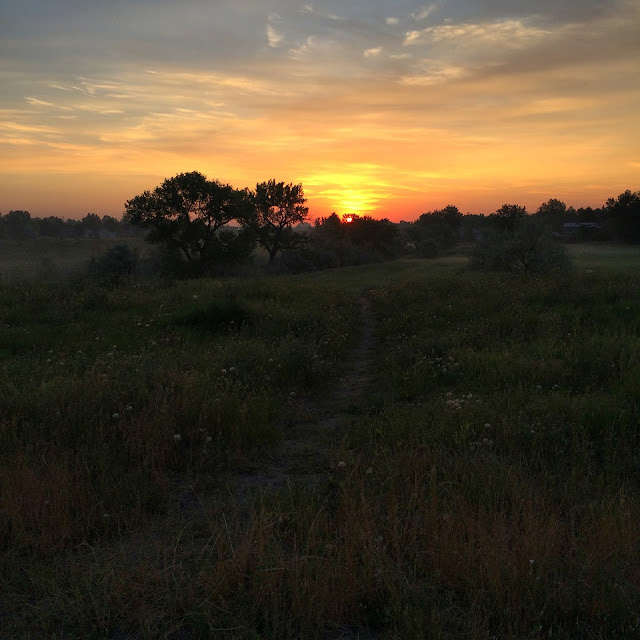 Even after the sun came up it didn't seem too hot (forecast for the day is 99 degrees!) The way out is uphill, and I took it VERY slow and easy. 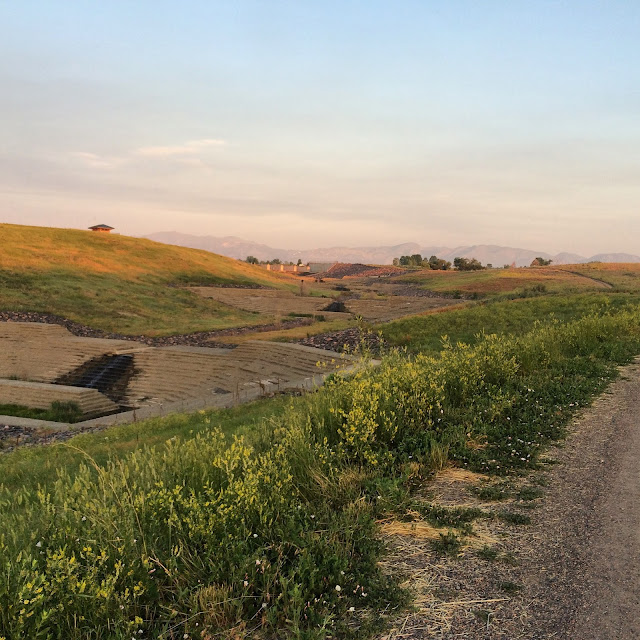 I got to go out a mile further than the last time I ran this trail, and it's a very exposed trail, but wide and dirt/gravel. Running here will need to be done on cool days or very early in the morning. Emergency stop at the bathroom on the way back, which was a LOT better than the way out. Did some stretching when I got home. The hip/groin is still sore/tender, but it seems that my range of motion is a little better than when I did yoga on Sunday. Spent a bulk of the morning using my Addaday torture device on my hip - hoping whatever I've got going on is just a knot or something. Did the day's videos - warm up, HIIT (lower body/abs) and cool down. This one wasn't too bad. Started packing for our upcoming weekend in Glenwood.
Wednesday (19,632 steps) - Warm up, upper body, cool down. Run club! A said she was tired and didn't want to run far, so we had plans to go to the track nearby. Turns out there were kids playing on the baseball field nearby so we couldn't run there. Ended up running a bit further than if we would have done our normal 3 mile route. Good times running with Maureen, Colfax and Heather. Went out to eat at Old Chicago's afterward.
Thursday (18,621 steps) - Woke up incredibly sore. Not just my left hip/groin, but my inner thighs. Yesterday's super short lower body video apparently kicked my ass. Geez. Cardio (where I had to do a few low impact modifications) and cool down. Since it was Maureen's birthday, we had plans of skipping A's gymnastics class and going to Belmar's run club. We did a super slow (like REALLY slow) walk/jog with Maureen and Colfax. 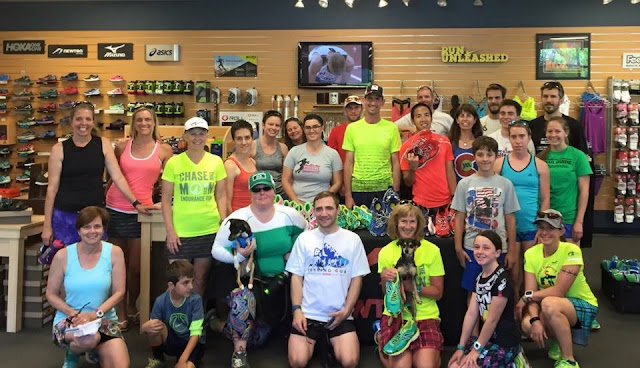 We went to Rocko's for dinner afterward with the group, where I had probably the best nachos I've ever eaten. 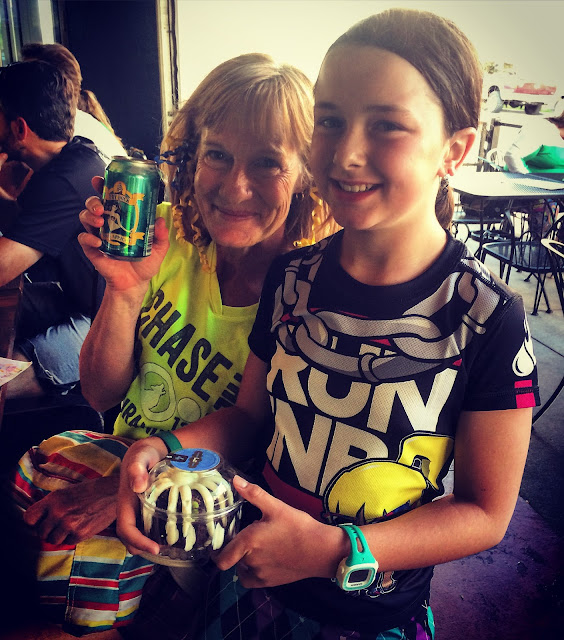 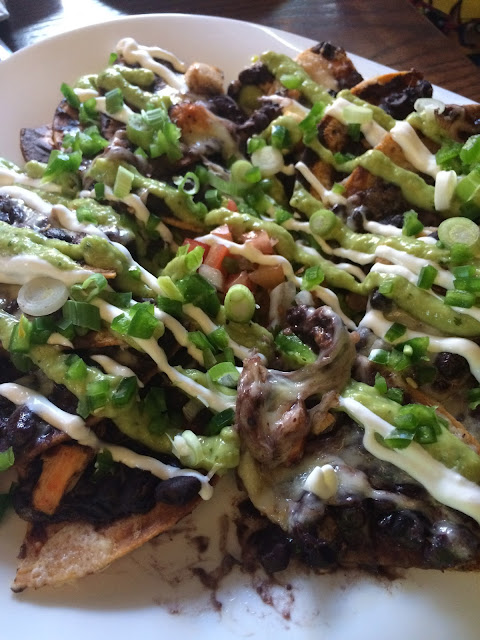 Failure to lose weight is a MYSTERY. Home late, in bed late.
Friday (17,453 steps) - Woke up still sore, so I didn't do the video (which looks like lower body). Maybe will do later at the hotel room. Looks like there is a "beginner" video - which maybe means I can get through it and not be too sore for the weekend? Anyway, up crazy early because I had to get A and her friend Madi to Union Station before 7:30 (which meant we had to be out the door at 6:45) for the Girl Scouts train ride to Glenwood Springs (that they get to attend for selling a jillion boxes of cookies). I was at work before 8, and since I worked through lunch all week I was able to head out around 2 to meet A and the Scouts in Glenwood. There was a frustrating amount of traffic, but I managed to arrive around 5:15. We didn't get around to eating dinner until after 7, but I really enjoyed the pizza and beer. 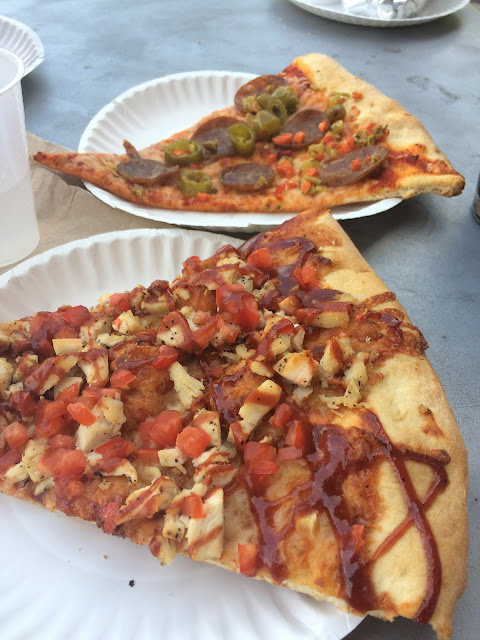 A and I headed over to scope out the trail head to make sure I knew where I was going. How could you NOT want to run here? 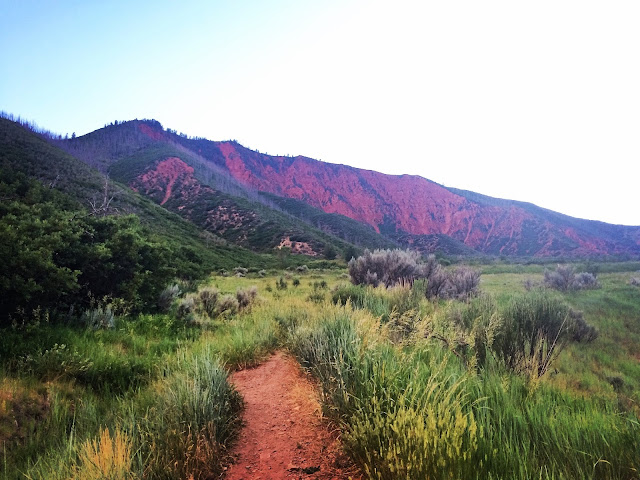 Quick trip to Target to pick up some essentials, and stopped by Dairy Queen. Apparently, along with the rest of the town. Took over 20 minutes to get an Orange Julius and a dipped cone.
Saturday (26,008 steps) - I decided to get up early and run the trails instead of doing a longer run on the bike path. HOLY CRAP WAS THIS CHALLENGING. Previously, I had run up the road, which was pretty steep. The trails were NUTS. I thought I was going to die at some points. One mile claimed to be about 900' of climbing! Anyway, I ran all the way to the top of Red Mountain, past the cross, where I saw a wild turkey. No pics, because it startled me and ran into the bushes before I had a chance to take one. The way down was "easier," but not much faster because it was so steep. I had hoped to do closer to 8 miles, but needing to be back to shower and eat before A's event meant I only had time to the 6ish miles. 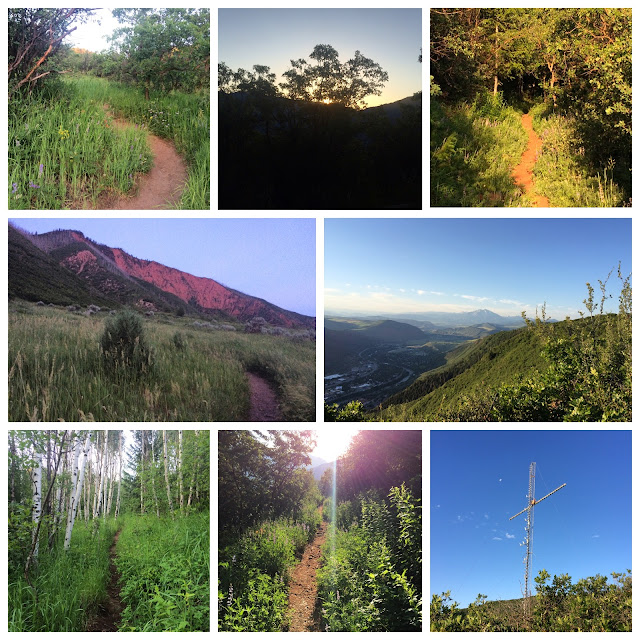 After breakfast we drove to the Glenwood Caverns Adventure Park. We met up with everyone from A's troop (except Rose, who had overslept) and took the tram to the top of the park. I had never been here, so it was fun to go on some rides - the alpine coaster was super fun, and A was tall enough to ride alone. Some of us went on a cave tour, then it was time for lunch (nachos/tacos) and then the awards ceremony. They announced the name and number of boxes of each and every girl that sold 750 or more boxes of cookies. The top seller in the state sold over 7,000 boxes. That's just crazy. 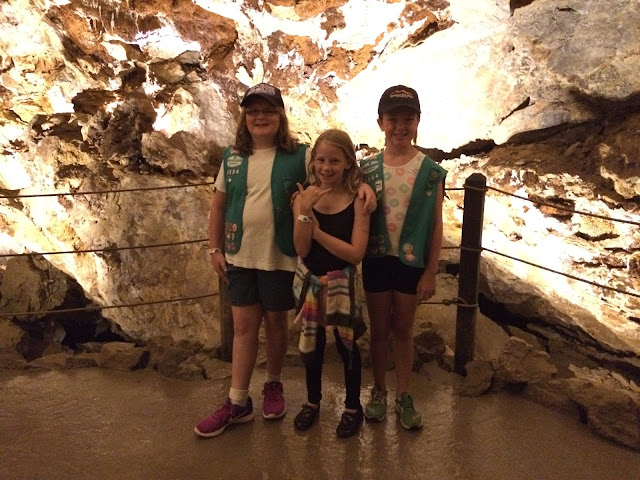 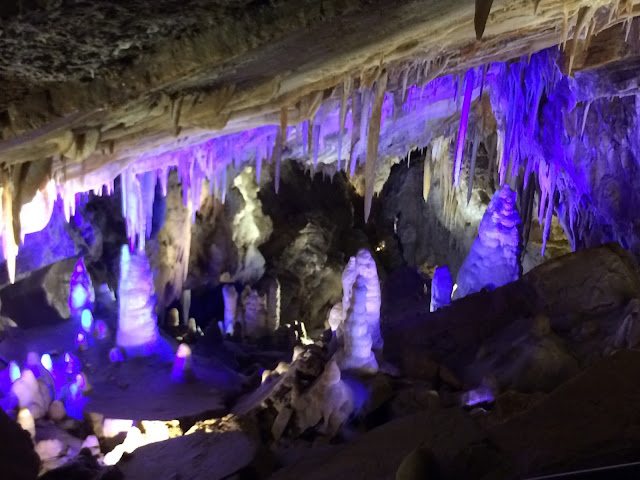 We went on a rides until about 5. The tram line was FOREVER LONG, so it was about 6 before we got done. We went to Vicco's Charcoal burger drive in for dinner. Wait was long, food was delicious.

I had been texting with A's dad about pick up for her going to Texas. He decided to drive out this year, which worked out nicely because I had some work around the house (plumbing) that needed to be done. However, he showed up early, and told me over the phone that he only had Sunday to work on the house because he had told his job he would be at work Tuesday, so he and A would need to leave early Monday. URG!!!!!!

A and I headed to Glenwood Brewpub for me to check out the local beer, then in bed fairly early. 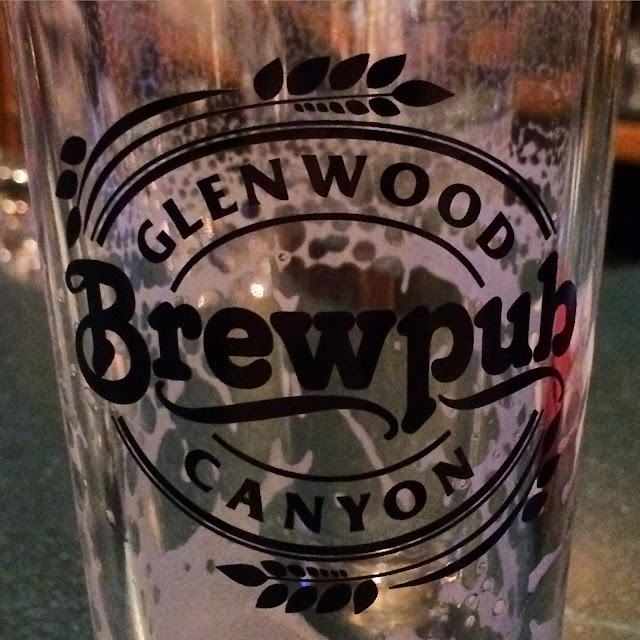 Sunday (32,238 steps) - Up before 6 for a quick breakfast at the hotel, load up the car and go to Hanging Lake. We had hiked it recently, in April, but were hoping to hike without all the ice. At 6:45 the parking lot was already pretty full, so I was glad to have the early start. Everything was really green, but I have to say that I think the lake itself looked "cooler" in the winter. 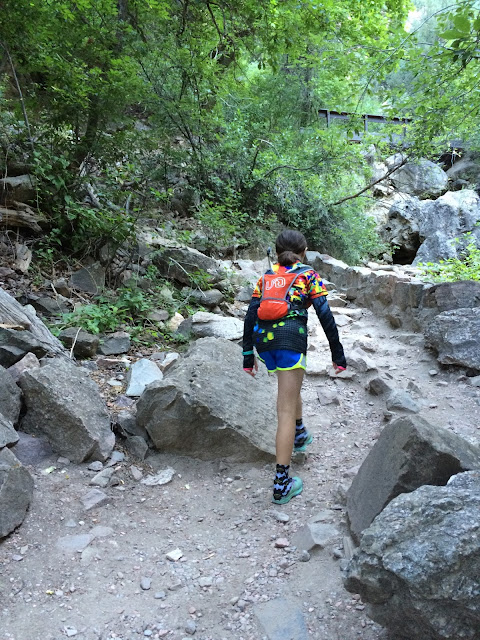 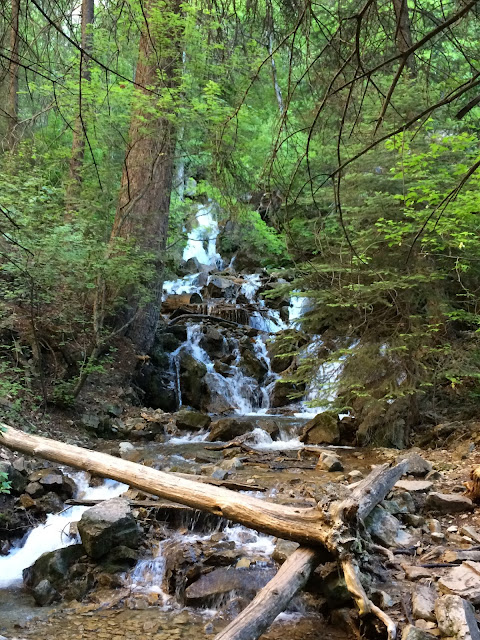 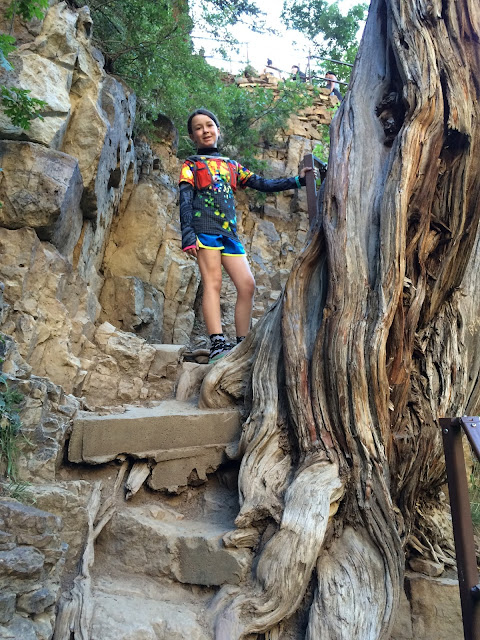 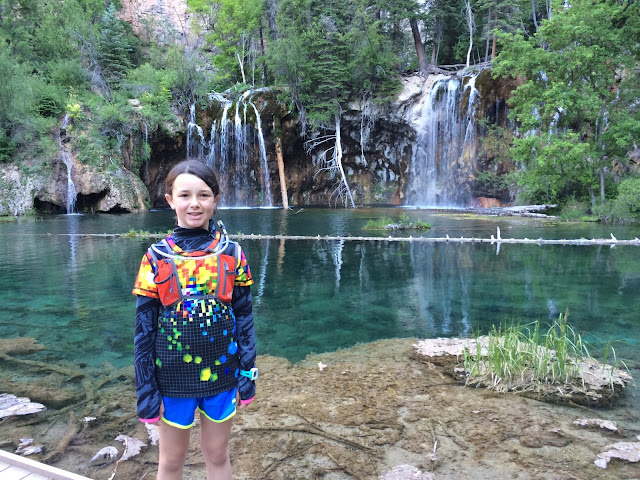 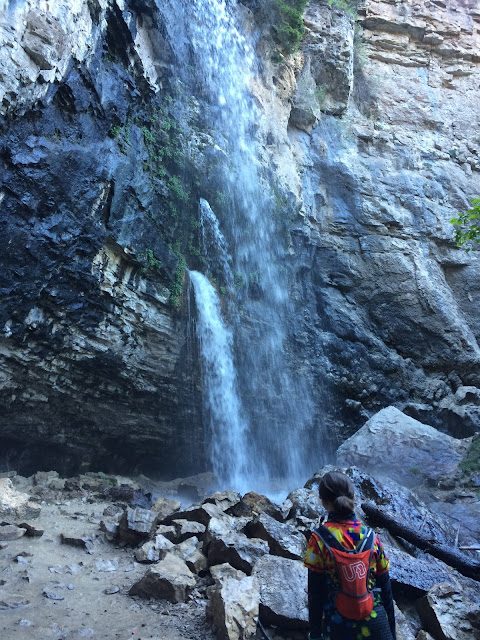 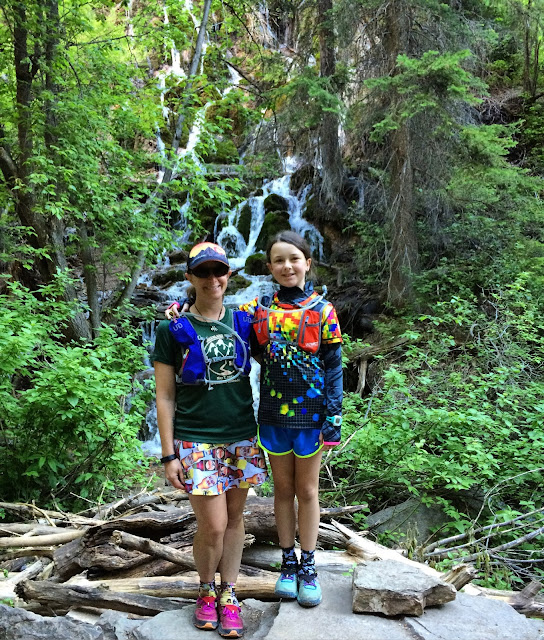 We were done in just under two hours, and on the road to get to the metro area as soon as possible. Stopped at the Yeti's Grind for coffee and breakfast. Traffic on the highway was a headache around Idaho Springs, but we got home just after noon. A's dad looked at my plumbing issues and wrote out a list of items I would need, we went to lunch and bought all the things. I tell you, if you know someone who is a licensed plumber and is willing to do work for you, you're lucky. He fixed my three major issues in just a few hours, and all it cost me was about $60 in parts. I would have probably paid a random person over $1,000. In the mean time, I was doing laundry and A was packing.

At 4, we headed out to the latest installment of Trails & Ales. Good thing we left early, since we went to the wrong lot/trail head. I had never run at Mt. Falcon, and was anxious to get a good run in. Newton was there to demo shoes (I didn't especially love the ones I tried), and Smartwool was there giving us free socks! Yahoo! A decided she would rather hike with Maureen and Colfax, so I headed out alone. HOLY MOLY. Yet another super challenging trail! This was just climb after climb... Was supposed to be a 3 mile loop, and I grew concerned when it was about 1.8 before the descent finally started. With my hip still being a bit wonky I wasn't able to bomb the downhill as much as I would like, but it wasn't too bad. I got to the bottom and didn't see Maureen and A, so I filled up my bottle and headed up the reverse way, thinking I would run into them. I got a text when I was almost another mile up that they had just done an out and back and they were almost back to the trail head. Ah well, I got in 5 miles instead of 3ish. 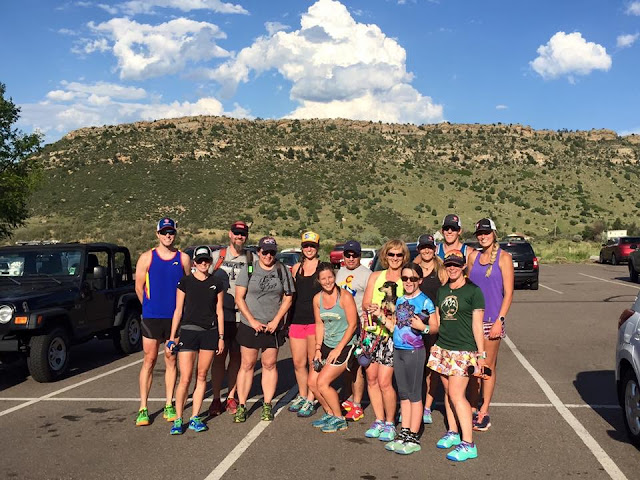 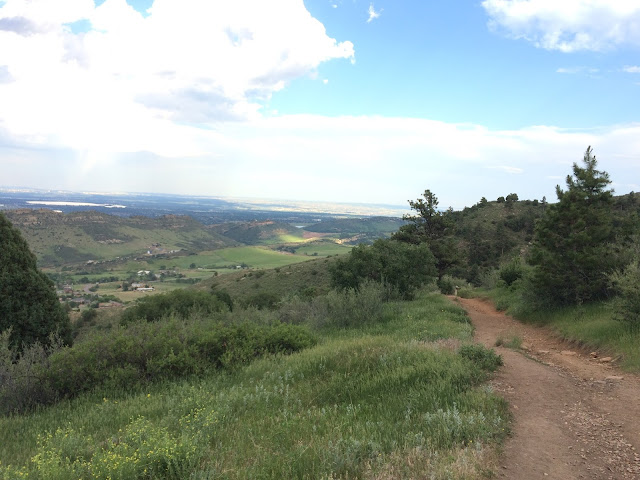 We all went to the Morrison Inn afterward for Mexican food and a beer. We didn't get home until after 9, and then it was more packing and laundry. EXHAUSTED.
Monday (27,010 steps) - I had told A's dad I would be up by 7. For some reason he heard 6, so I was awakened earlier than I planned. They headed out around 8. Sad face. After work I figured it would be a good idea to get a trail run in. I didn't want to run too far, so I went to Apex. I got out of the office a bit late and it was 6:15 before I got there. I hadn't been there in a few years, and the lower lot was now open, but the trail was of course the same. I had forgotten all the climbing on THIS one, as well. There weren't too many mountain bikers out and I got 5.5 miles in. 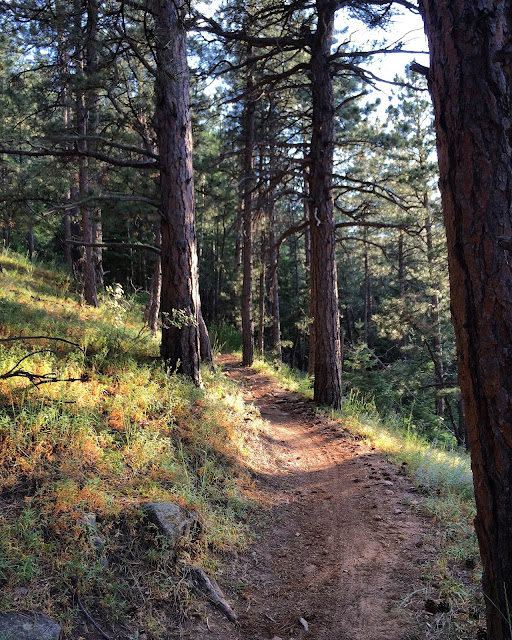 By the time I stopped at the grocery store, it was after 8 before I got home. Shower, dinner, an episode of "The Vanishing Women," and 20 minutes of reading.