The Redline Erie half marathon was only added after the race I initially wanted to run ON my birthday was cancelled. Leading up to the race I had TWO nightmares that we missed the race. Why?? This certainly wasn't our first rodeo, I have no idea why I was having this issue.

I glanced through the long-winded email from the race director and scanned for an address, mapping it at 30 minutes away. Also noting that there would not be medals on race day due to a manufacturing issue, but that they would be mailed (this race director ALWAYS seems to have problems, and this is not the first time medals have had to be issues way after the race is done).

The plan was to leave around 6:45, giving us plenty of time to park, get our bibs, navigate around the town fair and use the bathrooms.

The first problem is that we left a few minutes late. Second problem was the address in the email was only for packet pick-up days before the race. We had to go to the race website for the actual RACE address as it was not in the "things-to-know-last-minute-info" email. By the time we did all that driving around, we didn't get to old town Erie until 7:32. With the race starting at 8:00. We had to park about a half mile away because of the street closures, but in and out of the bathroom with no problem. Yet another race where there are no shirts in my size. Ordered a small, smallest size left is a large. WHY WHY WHY. Barely had enough time to slap on sunscreen and pin on my bib before we had to rush back over to the start. One more bathroom stop and we walked up minutes before the start.

Josh (the race director) had lost his voice but was still trying to yell out last minute course information. I couldn't hear him at all and figured - I'm mid to back of the back, I'll figure it out. I had a bottle of water with me since the first aid station wasn't until mile 3.5, even though there were 7 total stops on the course.

Race starts, and it is a bit congested at the start, but I fall into a decent pace and move over to the side and it's not that bad. Then I see the first big hill. I manage to run up the whole thing, but then of course, my legs are tired. I'm walking less than 15 minutes in. Even though it is cool and overcast, I am sweating like a crazy person.

The course was very hilly, and most of it seemed uphill. I vaguely recall miles 1.5-3 being the "best" - but I don't know if I'm remember that accurately.

There were not a lot of runners (maybe 100?) and I was in the back, with only a couple of people to run with. While I enjoy the smaller races on the trails, I hate city races like that. It is like a training run gone wrong. I was hot, tired, and not feeling all that great. The course was hilly, but at least things are finally turning green. I spent the first half of the course chasing a woman, and finally passed her around mile 8.

Not much to say about this race.... I walked a lot. I was tired. I don't feel like I necessarily gave it my "best" effort, but I didn't have it in me to push. Wah.

I somehow passed a half dozen people in the last few miles of the course. L was waiting near the finish line and got an amazing picture of me. HA. 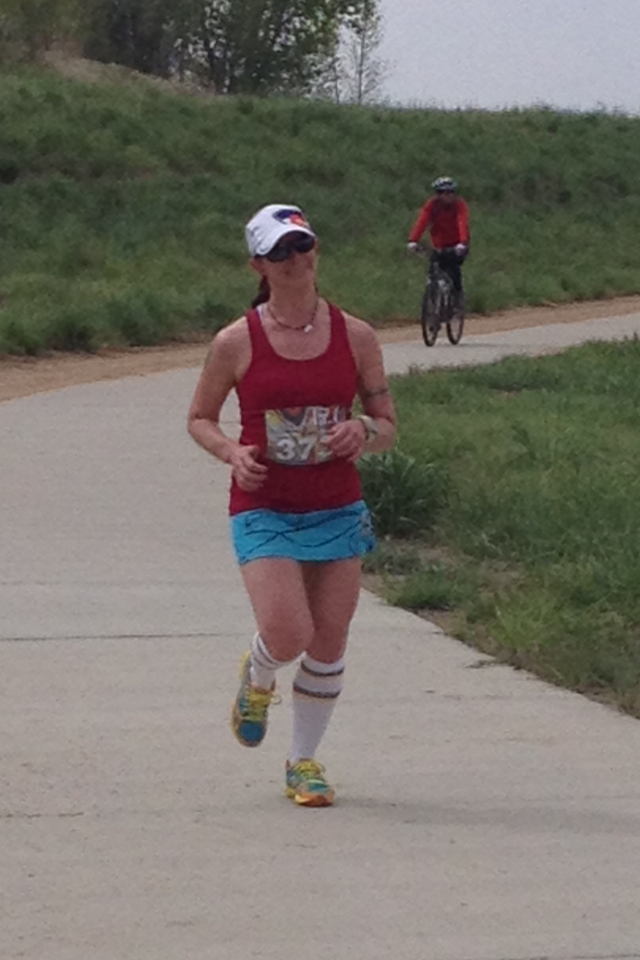