In 2010, I ran my third Bolder Boulder and said I would never run it again. Too big, too much hassle, etc. Then I won an entry last year and had a fantastic time running it truly for fun. So this year, when Runners Roost opened up a "Rooster Wave," I immediately signed us up to run!

We left the house at 6:30 to arrive at the Boulder Runners Roost just before 7 am. We were given our special shirts (that we promptly altered) and had breakfast at the store.
We had two party buses to take us to the start, and we left on time at 8 am. 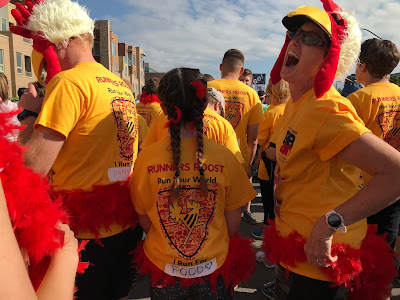 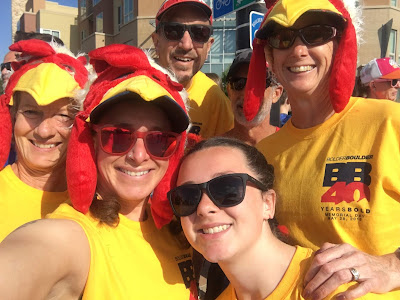 While we were waiting, we saw Ang, who was starting a few waves in front of us! 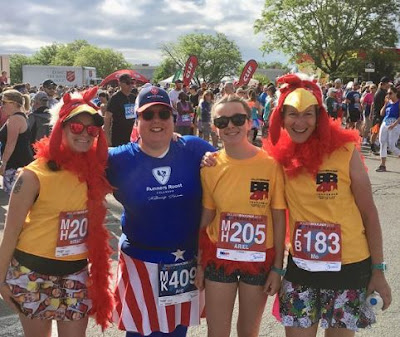 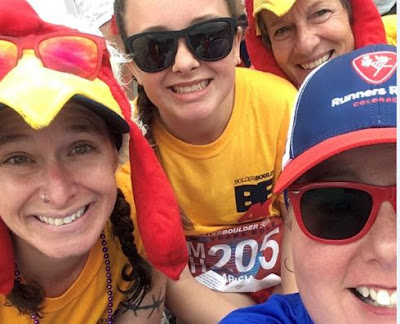 Somehow, the other bus didn't make it to the meeting place on time, and we stood around at the start waiting for them, missing our already very late start by another 20 minutes. By the time we finally crossed the line, it was almost 9:00, and we were deep in the waves of walkers. I had promised A a good time on course, so our first stop was just a few minutes in - the trampoline! The wait was pretty crazy, it was probably close to ten minutes before we got our turn. Did a few back handsprings and then off we went. 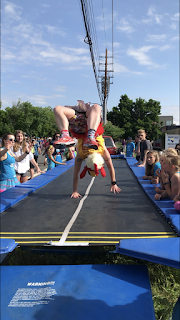 The next stop was the slip n' slide. The wait for this one was also pretty long. And... I didn't realize it at the time, but I lost my bib in the middle of my slide! 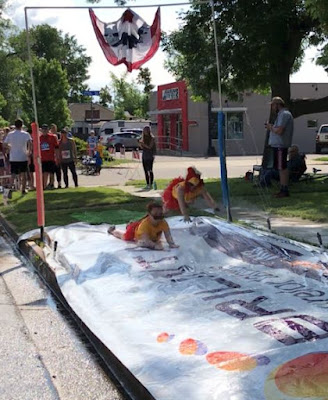 A half mile or so down the road at the "cartwheel" station was when I realized I didn't have my bib. I didn't want to go back for it, so off we went. It was pretty tough to even run when we wanted to because of the walkers and how crowded it was. It didn't help that we kept stopping to do things along the way. 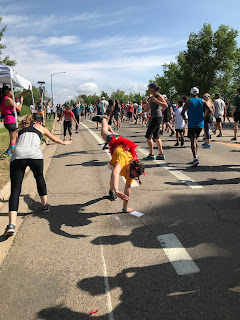 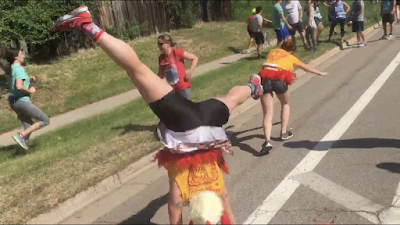 Like the keg stand (me) and the frat party (all of us) where Maureen and I got the only beer on course! (Last year we got full cans of beer a few times along the course, this year, nothing! (Maybe they had already run out because we were sooooo far back? (Keep in mind, the faster waves started more than two hours before we did). 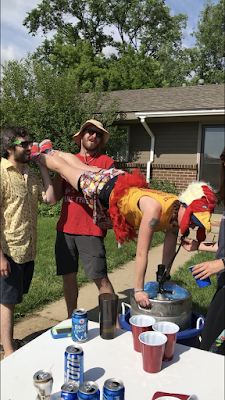 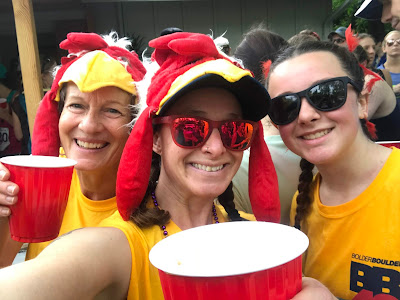 After the marshmallow and Dorito station (we missed bacon AGAIN), we were running a bit more. We stopped at the Roost cheer station at mile 4.5, and then before we knew it, we were nearly done. The biggest excitement of the race was getting assaulted by a woman smaller than me who tried to pull me off course because I didn't have a bib! Luckily I had plenty of pictures and videos of me prior to the slip n' slide and I was finally let through. So dramatic! (So, no, if you were stalking results, I didn't DNF). 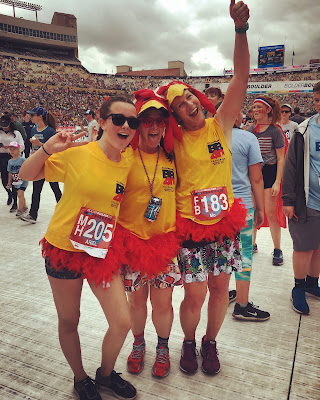 A had an absolute BLAST running. Next year she wants to be in a qualifying wave and still do all the fun stuff. (We had told her that last year there were barely any lines).

We were able to watch the elite race, which I hadn't stuck around for in the past. Our friend (and local Hoka rep) was running and it was really cool to watch him finish! 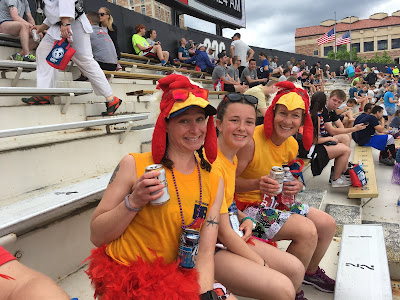 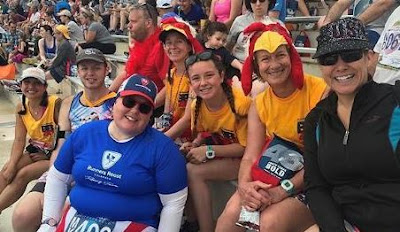