So when Heather moved to Texas last summer, she decided to run the Austin half marathon. Now you might remember that I ran the full marathon in 2012 (back when I as fast). She sent me a groupon in an attempt to entice me to join her. Somehow, I purchased this groupon (no seriously, they have my card on file and I don't actually recall hitting "buy"), and a long weekend was planned.

Our flight into Austin was delayed. We still had plenty of time to get to the Parmer Events Center to pick up our packets. Disappointed that the shirts were unisex? WHY??? Nothing of interest at the expo, so we were not there long.

Planned to leave at 5:30, with the 7 am start. I got up at shortly after 5, which gave me enough time to get dressed, braid my hair and have coffee.

I had hyped up the Waze app to Heather for getting us to our pre-booked parking at the Westin, yet the exit Waze told us was closed. We still arrived at the valet stand with plenty of time. The hotel was super awesome about letting us runners hang out in the lobby and use their fancy bathrooms. With about 15 minutes until the gun we decided we should head to the start. It was still dark!!

We lined up... somewhere? Maybe around the 4:30 sign, although we weren't planning on running that fast. I had looked at the course map and elevation profile earlier and realized it was not the same course I had run years earlier. Of note was the long gradual hill for roughly the first three miles. My personal goal was to not walk any of the hills.
I had my throwaway sweatshirt on and assumed I'd wear it at least the first mile or two. False. I got hot and ripped that thing off within the first 7 minutes. The aid stations were placed nearly every mile, and all had Nuun - yay, my favorite!
The first 8 miles were uneventful, other than the first of our 3(!!) beer stops.  Around mile 8 Heather was walking the hills. I was obnoxiously running them and then waiting at the top for her.
I do remember commenting that the race had not picked the most scenic city route. We ended up having another two random beer stops - including Mile Beerteen! 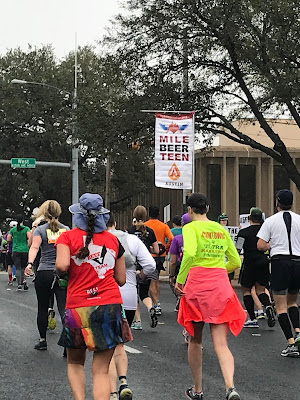 Luckily, at some point we heard someone talk about the hill at mile 12. And oh boy, was that a hill! Apparently one section was over 13% grade!
Thankfully, there was no longer an uphill finish, and we turned onto Congress Ave. for the last tenth. We got our bottle of water (and a nuun packet) and a bag of random crap. We did not, however, get a space blanket. We both decided to skip the beer and head back to the car instead. 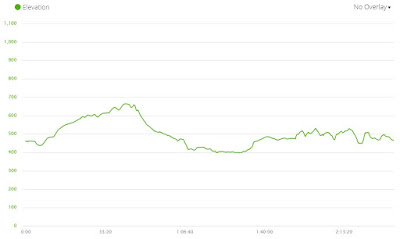 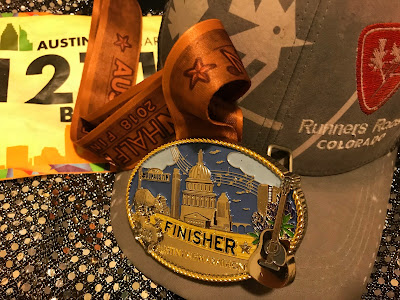