Time for the inaugural You Go Girl! half marathon!! I was sorta "broken" after running last weekend in Albuquerque. Both mentally and physically. Unofficially I have some Achilles Tendinitis on my right foot/heel. After running less than 2 miles the entire week, I was mildly freaking out. But.. there was no time for that.

Our flight left around noon, and as usual, we got out of the house a little late. (Thanks to my last minute trip to Target to get me the new Paul Frank knee high Halloween socks and the kids the new Tinkerbell movie). No problems at the airport, and off to Seattle. I was a bit panicky because I had NOT allowed much time to get from the airport to the Expo to pick up our packets. Luckily we landed a bit early. Go to pick up the rental car... apparently it's off-site. Awesome. By the time we are headed to the Expo we have less than an hour to get there. And then? We get stuck in a nice traffic jam on I-5. Somehow we get to the Courtyard Marriott with about 15 minutes to spare. Only there is nowhere to park. They allow us to leave the car for just long enough to get downstairs to pick up our stuff (as they were packing up, by the way). And then we headed back upstairs to check in. Really awesome goodies! Long sleeve shirt, small bag, and a Bondi band. Headed back upstairs to check in. Find out we have to park a few blocks away or pay $14 for valet. Thanks, we'll walk. The room was pretty nice (better be for as much as we paid to stay there!). Didn't feel like doing anything, so we relaxed and watched a few episodes of "Hoarders" before it was time for... THE BLOGGY MEET-UP!!!I was a bit nervous but totally psyched to finally meet some of the bloggers that I follow. Luckily it was only a short walk for us to get to "The Old Spaghetti Factory" (although the iPhone REALLY seems to have it out for me... got a bit lost AGAIN). Along the way: 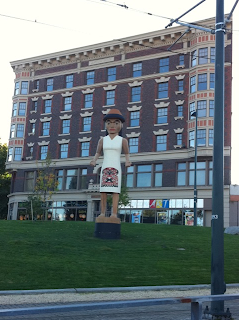 Get there only a few minutes late, immediately recognized Tall Mom and we made our way to our private room. WOWZA! Bloggy ladies everywhere! Got our name tags (great idea, we put our blog names on there since that is how most of us are known). Introductions and then lots of pleasant conversation. And of course... carbo load!

I didn't bring my camera, but some of the other girls did and we got this awesome group shot before we disbanded for the evening:

L and I decided we needed to find some beverages for the morning... we ended up having to walk over a mile into the ghetto part of Tacoma. Did you know that absolutely EVERYTHING closes by 6 pm??? Subway, Starbucks, yeah. Everything closed. Got back, gear all ready to go. Early to bed, and with an 8:45 start, we would get to sleep in. HURRAH!!

Got up at 7:10, look out the window... and gloomy, rainy mess outside. Yippee. Decide to braid hair again: 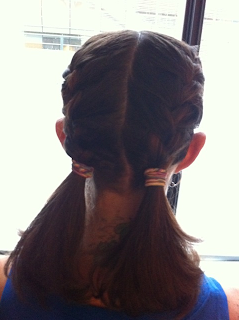 Get everything ready, and then head out to walk to meet the bloggy girls for some pre-race pictures. We run into the pacer team in the lobby and give a quick hello to Tamera (she is the only half fanatic to be at the "sun" level), who we met while running the Foot Traffic Flat back in July. She headed us in the right direction, and we found the girls with no trouble.


Since it was so cold and rainy, we had worn our hoodies. We had 20 minutes to get to the bag drop and use the bathrooms. L was getting panicky so we wished everyone luck and then headed up to the start just a few blocks away.

I really had absolutely NO idea what to expect. No running all week. I decided that the best approach to this race was the same as Hawaii. Go in with NO expectations and then I wouldn't be disappointed with the outcome. It was still cold and rainy at the start and I was a bit worried that my Garmin wouldn't work correctly because it was getting so wet... but nothing to do but wait and see.

We were lined up with the 10 minute mile pace, I gulped down a GU (which I don't normally do at the start)... and off we go. I can "feel" my foot, but it doesn't really hurt... phew!! Try to take it easy, but like most races I start off a bit fast. But feeling good!! L actually wasn't that far ahead of me, and I managed to see her at the first turn-around (in between miles 1 and 2). And then? The hills. Um. I thought this course looked mostly flat. As we had been walking around last night L had made the comment "It's like we are in San Francisco. I hope we don't have to run up any of these." Oh. But we did... in between mile 3 and 4 there was a monster hill. Yuck. Still rainy. Course was very wet, I spent a lot of the time watching my feet to make sure I wasn't steppnig in any really deep puddles or holes. The loop around the park was nice and muddy... and then (FINALLY) some downhill. I saw quite a few of the team kicking major ass - it was so nice to "know" people along the course, made it even more fun. Before I knew it, the 10Kers were splitting off, and off we go.

Right before the GU station at mile 7.3, I feel it. HORRIBLE cramping. For the first time ever I stop and use the bathroom along the course. I feel better, and off we go. A woman around mile 8 asks if I have the 50 state blog... haha!! I'm "recognizable!" Feeling pretty good, I see L (waaaay ahead of me now), T from Racing with Babes (being paced by Tall Mom for a PR). And then? The damn cramping again! Mile 10-11 was absolutely terrible. I really REALLY didn't want to walk. Even with my bathroom break, a PR was still within reach. I just could NOT do it. I had the worst side ache and had to walk a bit. Luckily it didn't last the rest of the race, and by mile 12 I was doing a lot better. I see the last bridge, and mile marker 13, and I'm ready to sprint to the end (which I do, passing at least a couple ladies in the chute). 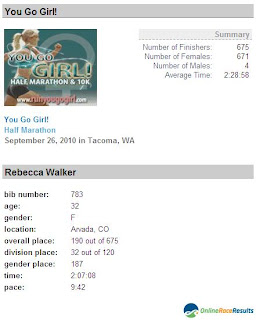 Cute finisher's "medal" (as I described to J, fittingly "girly"): 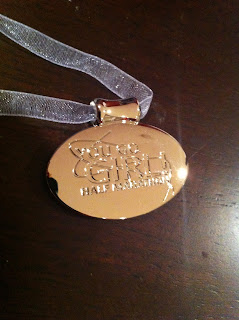 New PRs for many of the ladies (including L and T!!) Grabbed some goodies, chatted a few minutes, and then we had to be on our way because the super awesome host hotel we were staying at refused late check out. We had less than an hour to get back there to pack and shower.

We checked out only 15 minutes late, and we were pretty annoyed to be blind-sided with a $10 parking fee. Headed to get some lunch - and decided to walk (bad idea with all those hills, I thought L was going to have to drag me) to get pizza. Got lost again (shaking fist at the horrible HORRIBLE iPhone map app). 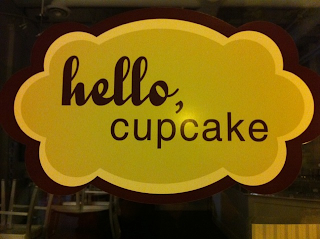 And then we were off... driving to Seattle for our "Washington Event" - the Space Needle. iPhone sorta sucked at directions (shocking), but we managed to find a lot nearby that charged us "only" $8.00 to park, and we walked up MORE hills. 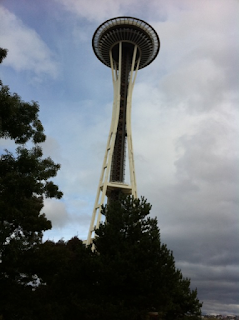 Did you know it takes 41 seconds to take the elevator the 520ish feet up? Apparently that's about 10 mph. Felt faster. 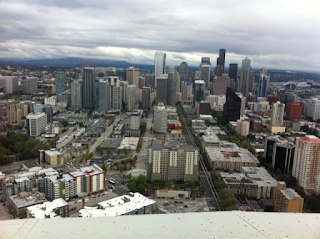 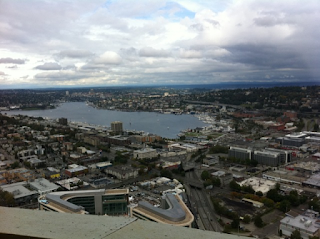 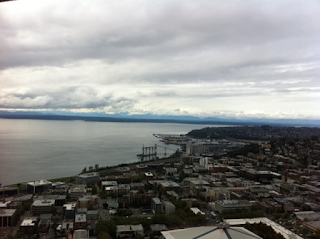 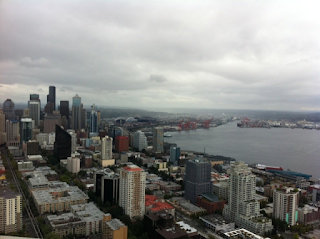 If there ever came the opportunity to do a race like this again, I would in a heartbeat. Meeting up with my bloggy friends was great, and the atmosphere of the race was FUN. I have missed that in a lot of my other races.

Flight back to Denver uneventful and we didn't get home until almost midnight. I had to stay up another hour or so to give my foot some much needed icing. I think I'll try the same schedule as last week - no running, lots of cross training.
at September 27, 2010

Email ThisBlogThis!Share to TwitterShare to FacebookShare to Pinterest
Labels: Achilles Tendinitis, half Fanatics, half marathon, You Go Girl