As is our style, we typically pack a ton of stuff into our last day on vacation. This one was no exception. We got up early again to get in about an hour long run: 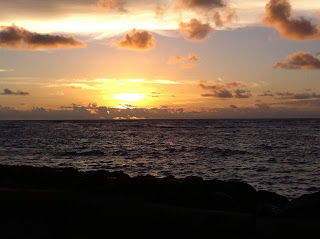 We had VERY little time to shower, pack, and then drive up the hill to the Chocolate Farm tour. Yes, you heard me. CHOCOLATE.FARM. We were psyched!! We were a bit mystified at how it was going to last 3 hours (???) but they grow other things on the farm besides chocolate plants, so there was a walking tour. And then? The chocolate tasting. 11 different kinds. Yum. 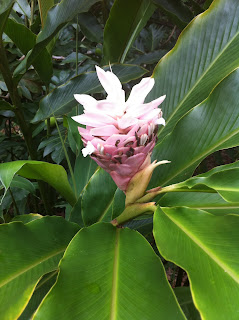 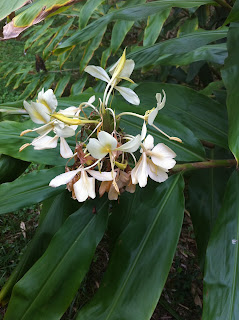 Viewing the Cacao trees was the end of the walking tour, then we sat under a tent and learned a bit more about the history of chocolate, and then the sampling started. We did blind taste tests of 11 different types of dark chocolate. I can't believe how different they all tasted! Most were good, some weren't. The tour did actually last three hours, so after it was done we had a quick hike back to the car and then we had to rush a bit to get some lunch. Since we were still on the north side of the island, we decided to go back to Olympic Cafe... I know, I know. Grilled cheese and of course more waffle fries :D

Traffic on the island is a bit "much" sometimes. There are only a handful of major "roads" and 95% of them are two lanes (one in each direction). We get done with lunch to find that there was an accident on the road we needed to be on to get south... they had to detour through a neighborhood... very stressful and slow moving. But, we made it to the CJM Stables with no additional trouble. 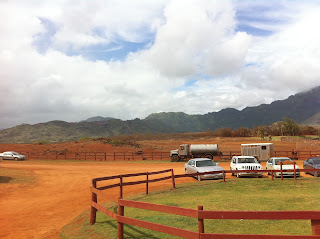 Yes, that means... horseback riding on the beach!! So after watching the safety/instructional video and filling out the consent forms, we got our horses and picked the "nice" guide and headed out for what we assumed would be a nice, leisurely ride... 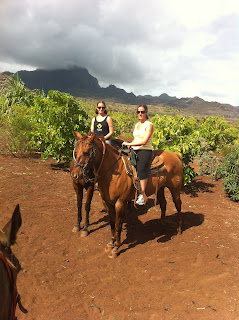 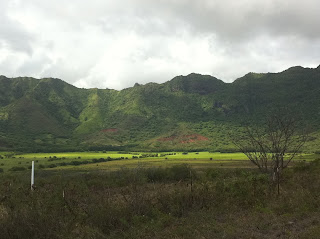 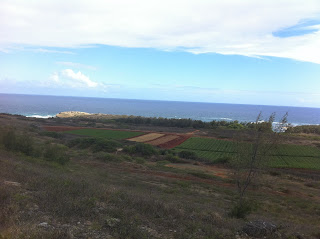 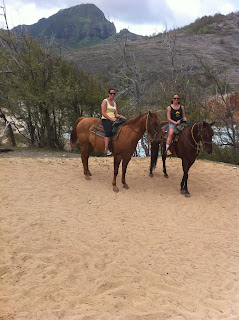 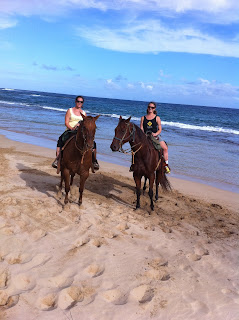 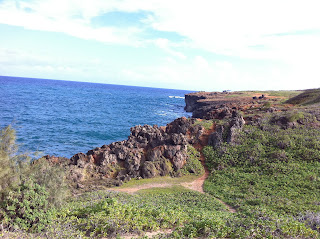 So... as for the horseback riding. I haven't been on a horse since I was a small child (the time my sister and I "stole" a horse out of my grandparent's friend's barn and we were never allowed to go back - ensured by the fact we rode bareback and got off the horses and we were too small to get back on them without help). Anyway, I'm by no means a skilled rider. Most of the ride was fine. But there were times that the guide would allow his horse to trot, and once we got up to a gallop (or canter??) and I was freakin' terrified!!! I swear I thought I was going to fly off the horse. Luckily my horse was pretty obedient when it came to following rein commands. (As an aside, my ass STILL hurts almost a week later).

We were on the south side of the island and had seen a brick oven pizza restaurant that we had been wanting to try since we were here last year. They had weird hours and we never seemed to be south in the evening, so this was our last shot. We ordered quick, but of course they made our order wrong... and it was about then that I realized I was confused as when our flight was leaving that night. Ate our pizza, and then after almost FOUR months of not having any, I had my first (1/2) slice of cheesecake - drizzled with passion fruit (YUM!!!) So... we were about 30 minutes from the airport. Still had to stop by Starbucks for our last mocha coconut (sniff) and I wanted to run into Border's to get a book... return rental car, etc. Apparently the rental car only tells you to bring it back ONE hour in advance, not two. Oops. So, I realize this and we had crap all over the car that we were trying to shove in bags, figuring we would get everything organized at the airport. Then on the shuttle I realize I accidently took the rental car keys (!!!), but luckily the driver had a walkie and told them he would bring them by. We didn't have boarding passes yet, and that of course took FOREVER. By the time we had them printed it was less than 45 minutes until our plane departed. The line at security was insane. Remember in an earlier post I said all the flights essentially come in at the same time? Well, they all LEAVE around the same time too. And the line was moving SLOOOOOW. I'm starting to get panicky that we could miss our flight. We get to the front of security and it's at that point that the crew cuts in line, known travelers, etc. 16 minutes until departure... We literally RUN through the airport, with no shoes on, hoping we didn't leave anything at the security. We are absolutely the LAST people on the plane and the doors close and we are in the air, oh, 5 minutes later? Blah. Too much stress.

So our connection this time was in Honolulu, and the flight was 15-16 minutes at most. Honolulu is a pretty big airport, a lot of it is outside and there are no moving walkways. Seems we will never find our gate. Finally get there, and then the last minute packing and moving stuff around. Flight leaves on time - around a 7 hour trip back to Denver. Unfortunately, when I "want" to sleep on a plane, I can't. There was a screaming kid at one point, and I dozed off a few times but didn't get any real quality sleep. Maybe 3 hours total "rest" the entire flight. Woke up long enough to see the sun coming up somewhere over the western states: 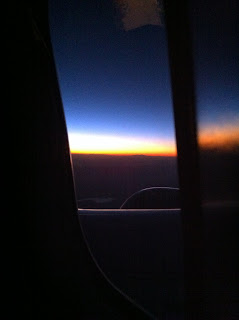