Three Things Thursday... And then some


As promised, I took it "easy" - opting to do the Crossramp (blah) and the Recumbent bike (blah, blah). The best thing about using the machines on this side of the gym is I'm NOT facing a wall of mirrors, so I can people watch. And boy, are people at my gym FASCINATING. 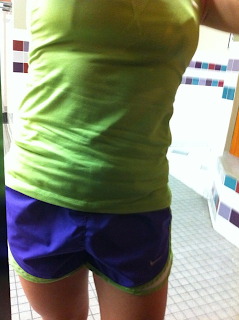 Tuesday
BodyPump class. The instructor STILL sucks. It's REALLY hard for me to not give her dirty looks throughout class. I have to be careful because her husband participates and even though he doesn't do half the lifting correctly, he finds it necessary to "teach" too, which is also beyond annoying. 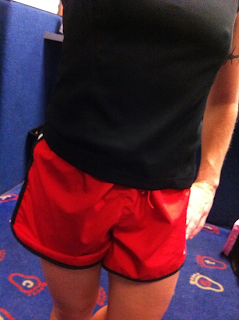 Notice that I'm wearing shorts. So I wasn't PLANNING on running. But I had only a little time after class, so I ran anyway: 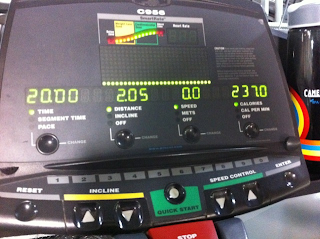 Picking up A at daycare after the workout - she is "striking a pose" (oy):

Wednesday
I know myself well enough to know I was going to run again this week. So, might as well do it a bit earlier in the week, just in case I needed extra time to rest/ice/etc. I shall call this outfit - "Rainbow Brite" 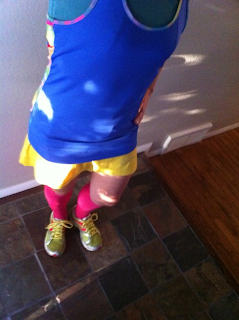 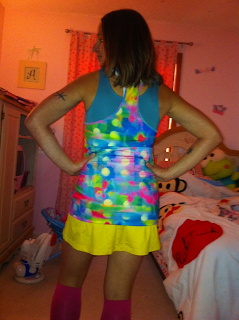 Run went ok, I went with my aerobic program, toned down the incline just a bit for an "easier" program: 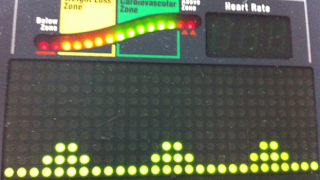 2. The Injury
Well... I keep trying to get in to see a doctor. They never seem to have anything for a new patient. Last time I called I commented that this was the third time I had tried to make an appointment and the soonest they can ever seem to get me in is the following Monday. The receptionist had the nerve to say, "Next time plan ahead more." Really? Plan ahead for an injury? OK then.
Anyway, I have been doing what I can... using the green spiky golf ball thing to massage the bottom of my feet, using the stick to rub down my legs, using cream and massaging. Wearing compression socks 12+ hours a day. And most importantly... icing. I've been doing pretty regular regimen of ice on for 15 min and off for 20, at LEAST 5 sets a day.
The verdict? Well, I think it MIGHT be getting better. I did actually run this week (shame on me), but it doesn't feel as tender as it has. I will continue to take it easy this week, at MOST running a few miles Friday morning.
3. September Recap and October Goals
Thanks to my injury, most of September was a total fail.
September Goals (Recap)
October Goals
at September 30, 2010