Day 10 (Part One) - The Chicago Half Marathon Race Recap

The 14th Annual Chicago Half Marathon was to start "early" at 7 am (due to the opening game of the Chicago Bears). I purposely picked the hotel we stayed at because it was decently close to the start line so we could walk there if necessary. After seeing the neighborhood we didn't even want to ATTEMPT to drive there, and taking a cab seemed silly. So we got up just a bit earlier, got ready to go, and then we headed out. We rarely take advantage of the bag drop, but it was chilly, so we wore our sweatshirts. I had GPS'd directions to Jackson Park, figuring that with a sell-out race of 20,500 people (between the half and the 5K) that we would have no trouble finding out where we needed to be. It was still pretty dark out, and we didn't start seeing other runners until we got much closer to the start line. 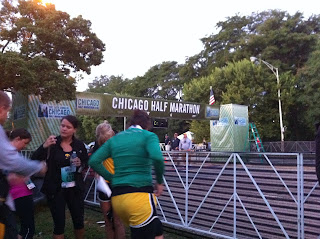 Immediately hit up the port-o-potty line since it was short, and then wandered around trying to find the bag drop... when I ran into a fellow Half Fanatic and FB friend, Dave! (Thanks for getting this shot :D )


Found the bag drop (it looked to be VERY organized for a race of this size). Then we headed over for another quick trip to the bathroom, and finished just in time to line up in our corral for somewhere in between the 2:00 and 2:10 finishing times.


I have to admit. I was NOT feeling it. I was definitely tired. And feeling VERY guilty/terrible about missing my sister's big moment for another race. The goal of course was to finish as FAST as possible (which I like to do anyway), walk back to the hotel, fastest shower in the history of showers, drive as fast as I can without getting a ticket or in an accident, and see most of her race.
Anyway. What a disaster this race is... sooo many people!! I think over 13,000 peole were running the half. The course is along the streets - mostly on Lake Shore Drive. The first few miles were tough. Dodging around the slow people and walkers. Even with corrals in a race of this size, there are of COURSE still those that think they need to cross the mat at gun time. Drives me CRAZY!!! My ankle was feeling a little tender and I was worried it would give me problems throughout the race. The streets were typical of that of any city, potholes, cracks, etc, so I spent a lot of time looking at my feet to make sure it didn't fall.

I might be in the minority, but I did not care for this race at all. The course was boring, there was nothing to look at (other than the lake, but hello, after looking at the gorgeous ocean in Hawaii for a week it was blah) and the distant downtown. And of course the bajillion people in front of me that stretched on for (seemingly) ever. 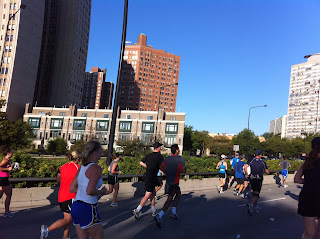 I made sure to stop at every aid station - they were well stocked with gatorade and water. But depending on where I happened to be on the road, I almost missed them a few times because it was hard to "merge" over to them. One thing I will say, crowd support for this race is amazing. Tons of people, on the medians, sides of the road, on the bridges. They have signs and music and cheer a lot. So that part was nice. Super happy to be at the turnaround. I notice that if I am able to hold on to my current pace I could possibly set a personal record.

However, I was REALLY struggling. I was VERY hot and tired, and just wanted to be done. It took everything in me to not walk (I really wanted to, but settled for only a brisk walk through aid stations. Which, as an aside, I manage to spill on myself almost every time). 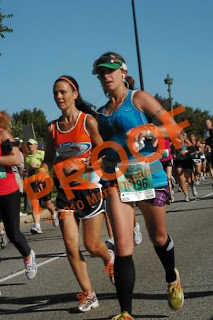 Kicked it in to high gear and somehow managed to beat my best time!! 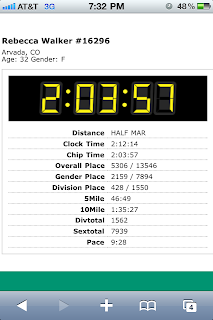 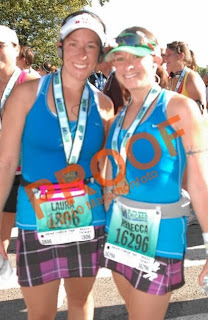 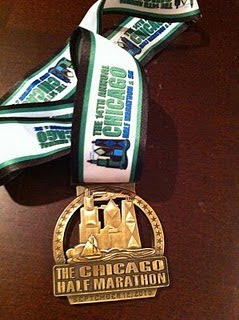 Trying to weave the mayhem and madness to pick up the drop bag and get the heck out of there was totally insane. So many people! Thankfully everything was pretty well marked and we got back to the bag drop, took just a minute to pick up the bag (fabulous organization, Chicago!). Getting offical results printed on a little label and our free piece of pizza took maybe five minutes. We were a little turned around, but thanks to GPS on the phone started walking in the direction of the hotel, making pretty good time. Stopped long enough to buy a postcard and soda. Super fast shower and then headed out on our drive to Madison.
at September 16, 2010