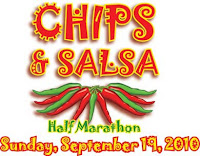 We had to pick up our packets for the 7th annual Chips & Salsa Half Marathon by 3:00, so we took a late morning flight to get there in time. Picked up non-exciting packets (cotton shirt, bib, ads) and then hit up Whataburger for lunch (it being National Cheeseburger Day) and all: 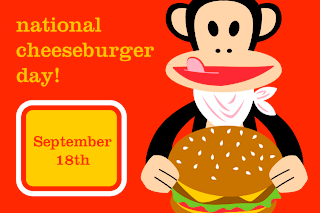 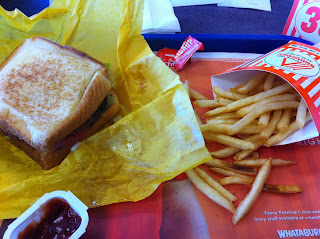 Lunch was pretty inexpensive and fabulous. We had some time to kill so we drove to the "Petroglyph National Monument." We neglected to read the sign that suggested a hat, water and closed-toe shoes for the 2.4 mile round trip walk. It was mildly annoying doing the whole walk in flip flops... through sand... in the desert... but we managed. Most of the conversation varied between "This is the hottest I've been... ever" and "I wonder who authenticated these petrogylphs."


We finished up and headed off for the next adventure... The Albuquerque International Balloon Museum. Oh yes. It was supposed to cost $4 to get in but since as were there at 4:00 they had already closed their registers (???) so it was free. Took less than an hour to get through it - and I may have actually learned a few things. (Did you know farm animals were the first in flight? I believe it was a sheep and a chicken... there might have been a third one). 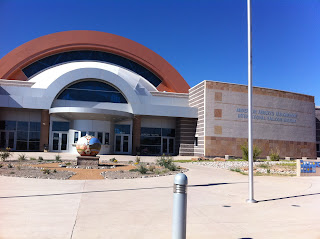 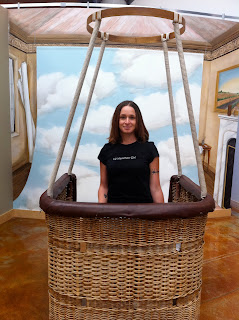 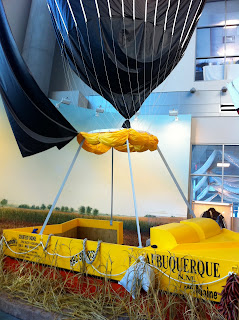 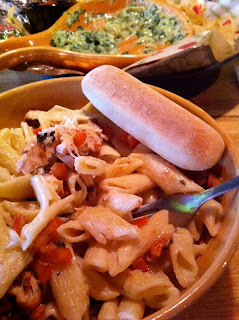 Dinner was fabulous and by the time we got back to the room it was almost 8. Beer and reading for me - movie for L. 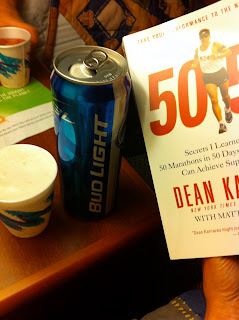 Made sure I had everything ready the night before. I don't  like any surprises on race mornings!! 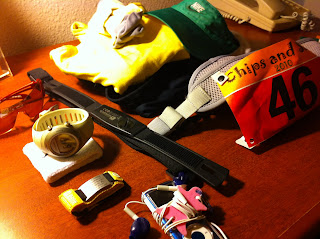 Didn't sleep as well as I usually do so I was up before my alarm - which was supposed to go off at 5:15. Dressed, braid hair (took a bit longer than I had anticipated), bagel and peanut butter. Headed out the door right around 6. Found it thanks to the other people driving there, nothing was marked or lit, I might have passed it if I wasn't paying close attention. Parked the car and they were just setting up the tables... In the dark. Seriously. Got my timing chip found out the bathrooms were back in the unlit parking lot I'd just come from. Potty #1. Back to car - time to kill, eat iced oatmeal raisin Luna bar and drink more of my Nuun, putting remainder in my fuel belt. Potty #2. Wander around looking for the start line - we think it's back where we got timing chips. Random guy says "I've followed you girls before." We finally figured out it was in Red Wing - which he also agreed to be WORST EVER. Realize race starts back behind the parking lot. Ten minutes to go. Potty #3. Drop off stuff I don't need in car, hide keys behind tire because I don't have an extra pocket. Race starts about ten minutes late. Supposed to be flat and fast but I'm already hot and ankle is tender.

Pace is really fast at the beginning, which I hate. It's like half the people are actually "racing" and the rest of us are doing a slow and strenuous training run in a half-ass attempt to keep up. Ankle sore right off the line and .49 miles in I burp and vomit comes up. Shaping up to be a fabulous race.

Somehow manage to keep a sub 10 minute mile pace for the first mile. Then the cramping starts. There were supposed to be port-o-potties on the course but I never saw one.

Very hot. Drinking lots, thankful for belt which I re-fueled. Cramping getting worse, turns into full on side ache. By about mile 9, the pace slows and I have to walk every half mile because putting pressure on the side does nothing. 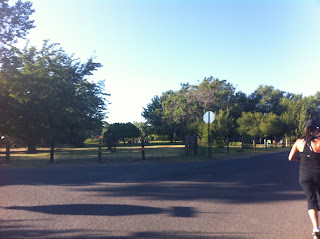 I stopped looking at my watch except to gauge how long I was walking. I didn't even look at it when I crossed the finish line. Official results say 2:10:53 (actually not bad considering how this went). I felt like I was going to throw up (again). I have NEVER felt so sick after a race. No water at the finish line. EXTREMELY disappointed that the medal I thought I was going to get - "Finisher awards for ALL Half Marathon particpants"(exact wording from the registration page) turned out to be a stupid salsa bowl... one not even decorated with anything affiliated with the race.

So the big slap in the face was L getting a medal. She apparently got yet another PR and placed third in our age group. I especially liked the comment "Oh, the number three by name, does that mean I place?" Really, now??? I will just say it bluntly. I AM REALLY TIRED OF LOSING GRACEFULLY. There. I said it. Every.Single.Race. she beats me. Usually by "only" ten minutes, but this time 17. SEVENTEEN FREAKIN' MINUTES. When my other sister races? They BOTH beat me. The first time that happened I was pretty upset but I learned to let it go, figuring I was at least giving it my best attempt every time. Well. I'm tired of it. Every race seems to get harder and harder for me, while every race seems to get easier and easier for her. We do the same training at the same pace. We live in the same house and eat the same meals. SO PLEASE TELL ME WHY I'M NOT IMPROVING AND SHE IS??? UGH!!! Jealousy reared it's ugly head and the last six months came crashing down in a meltdown (from me). Everything came rushing back "I'm too sick to race, so I'll run with you" and "I decided I'm running a full marathon in a month" hit me... and I snapped. I'm especially mad about the marathon. Really??? You can't even let me have THAT??? You have to do yours TWO WEEKS BEFORE MINE????? (W - for the record, it does NOT help hearing about it before hand, it just makes me more and more pissed with every passing day).

So I've been sitting here even debating about posting and whether I should mention any of this. But you know what? It happened, I'm mad, and I really wish I knew then what I know now, because I wouldn't have pre-scheduled soooo many races.

Blah. Help me get out of this snarky, jealous, crappy funk. There is nothing I can seemingly do about it and venting doesn't help.

Oh. And the ankle sucks and it hurts worse than before. I'm sure a few unplanned days off will improve my mood. >:(
at September 19, 2010

Email ThisBlogThis!Share to TwitterShare to FacebookShare to Pinterest
Labels: albuquerque, half marathon