Wednesday, September 8
Last year we had booked snorkeling only to have it cancelled the day before because of tides. We had scheduled this the first day that we were in town to make sure in case anything happened we would be sure to be able to re-schedule. We had to be down on the south side before 8, so we picked today to be our day off from running. Checked in with Blue Dolphin Charters, signed our waivers, and we were off to our boat - captained by "Pierre" who had a shaved head and lots of tattoos. They gave a long speech about safety, sea sickness, etc, and one family opted to get off the boat before we even left the pier. And then we were off... 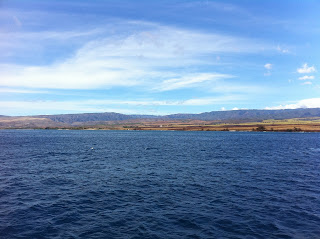 The pictures do not even do this justice, it's absolutely amazing being out on the water. 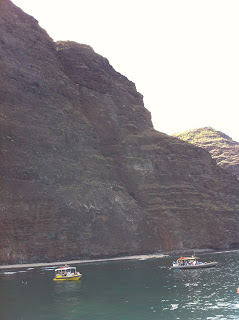 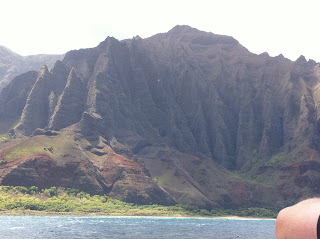 The captain then announced to put on our sunscreen and get ready for snorkeling. PSYCHED! Only... A few minutes later one of the crew comes up to the captain talking about a very sick passenger they have down below. Apparently she keeps passing out, vomiting, delerious, etc. The woman had a severe medical condition that she was prescribed to treat with valium. She started feeling seasick and instead of telling anyone, popped a few more valiums. And overdosed. The captain and crew decided they couldn't risk the health of this woman and her medical "emergency" and ordered us back to shore. No. Snorkeling. Again. **sniff**
Very stressed out and tense boat ride back to shore. Everyone was pretty disappointed that they couldn't snorkel but everyone "understood" that they had to do what was best for the sick passenger. So they opened the bar (I personally can't drink at 10:30 in the morning even IF I am on vacation) and served lunch. It was a very long and bouncy trip back to shore. Even those with stomach of steel (ahem) felt minorly seasick.

Get back to the pier and there is an ambulance and crew waiting for the lady, we get off and head back to the office to inquire about a refund for not snorkeling. Company says standard is a $10 per person refund if snorkeling doesn't happen. Whaaaat??? Um. No. Long story short, even after a conversation with the captain (Pierre not so friendly this time) and the "manager" they claim there is nothing they can do. I understand they still fed us and took us on a boat ride, but I certainly didn't pay so much for THAT. And I wasn't asking for a full refund, just half. They refused so I disputed half the cost on my credit card.
Pretty much ruined our day. In fact, I'm not even sure what we did for dinner that night. Bed early again.
at September 15, 2010