Was woken up pretty early since I was sleeping on the floor of my grandma's living room. Before 7 am we had the kids dressed and outside. Too much chaos! Quick breakfast and then a trip to the store to pick up some much needed caffeine.

On the agenda today... taking Wendy back down to the convention center to pick up the rest of her drop bags and wander through the Ironman "store." So. I have never been to a triathlon event, much less an Ironman. All I can say is... these people are hardcore. The line to register for next year's event was wrapped around the entire building. The line to get into the store/merchandise area took us about 30 minutes to get through. Wendy REALLY wanted something that said "finisher" on it.

First off. Ironman makes a KILLING on their merchandise. $140 for a jacket? Really? Not to mention who ever actually ordered all this gear did not order enough of "normal" sizes. By the time we were in (maybe 9 am?) there was only XS or S left in most everything. Probably saved Wendy some money though. I tried to convince her to get the awesome cowprint singlet but she shot me down. I did learn some things while shopping. Did you know that the Ironman symbol is called an "M Dot?" I didn't.

There was also a room set up where you could see your finishing shot - Wendy was pleased with hers and ordered a package. Everything took so long here it was time for us to start out on the drive back to Milwaukee. We decide we are hungry and want to eat at Culver's. I spot an exit for one, drive a few miles off the highway - only to discover they were re-paving the parking lot and not open! Grrr! Turn around, and it just so happened the exit claimed there were two, one in each direction. After about 10 minutes, we arrive at the second one. Order our food (this was a somewhat more complicated process for some, ahem, Wendy), and eat. FAB.U.LOUS. Butter burger, fries, and yes, I ate some of A's heath ice cream.

We thought our flight left at 3. But after driving a bit longer that seemed confusing to me. Why would I have not asked to be picked up sooner than 7? After some research, we discovered our flight didn't leave until almost 5. We had thought we were running late when we thought the flight was at 3, but ended up being at the airport almost 3 hours early. It was nice not rushing through the airport for once. I actually noticed this sign and found it hilarious: 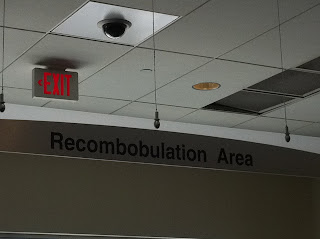 It was very difficult to keep A entertained. Three days of chaos and no nap do a number on her (and me). Grabbed a Southwest Chicken salad to eat on the plane.

Flight to Denver? Uneventful. Yay for another cookie. We arrive, hungry. Salad did not satisfy me. Wendy was taking the shuttle bus to Boulder, and we ordered some Domino's (Buffalo Chicken sandwich for me and Mac & Cheese bread bowl for A) while we waited for J.

In summary of my trip: