What a rushed afternoon I had... I ended up getting to the gym a bit late - and for whatever reason, there was more than double the number of people in my BodyPump class... L had gotten there on time, but our regular spot was gone (pout) and there were virutally no weights left. So. I don't like the instructor to begin with and I admit I spend a greater portion of the class glaring at her. I had to watch myself as I ended up directly in front of her... and for much of the class with weights MUCH outside my comfort zone because most of the smaller weights were gone.

Anyway. After class ended I decided to squeeze in a few more miles to pad my August numbers. The run was SO much better than Monday's hill program. "Easy" (as easy as treadmill ever is anyway) two miles: 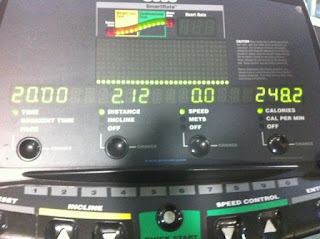 And since Tuesday is not normally a run day, and I don't wear skirts to class, I was actually wearing (gasp) shorts: 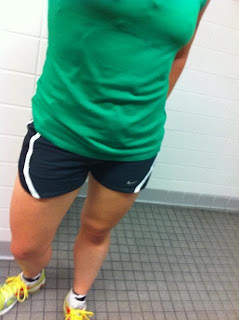 As for the final numbers...

What??? Wow. My highest month historically was just short of 130 miles. So I had apparently kicked it into high gear. Most of my runs were pretty good. I had 2 half marathons, and a couple shorter races that happened on normal days off. VERY pleased with the number of miles. Also, it's important to note that August miles put me over the miles I ran in 2009... already! With MONTHS to go. I was worried I would not be able to hit my 1000 mile goal for 2010 after my quad injury right before Christmas pretty much sidelined me for most of January and February.