And the incline got steeper and steeper...
Treadmill - Hill Program - Monday, August 30

Blah!! I really can't wait until I'm done with Kauai and I don't have to do such an intense hill workout. I really don't mind the "wimpier" hill programs that cap out at 3 or 4... or even 5. But the last few weeks I've been doing the "random" program and I've been getting some really hard programs. Like this one: 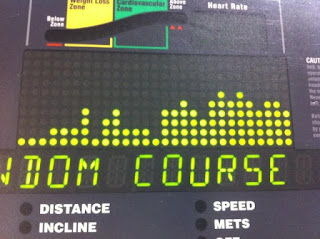 the first half hour? No big deal. The whole second half???? I have never been so close to throwing up on the treadmill. I had over-eaten a bit on Sunday night, and thought I was feeling better... until this program. One of those peaks I had to walk (about 30 seconds) and then the second peak I slowed my speed considerably. 6.0? Freakin A. That's just ridiculous for a treadmill workout! I was sweating and dry heaving and trying not to faint or die (that would be awkward). Never have I felt so happy to be done. Even after I got to the "cool down" I struggled because my muscles were so tight after that last half hour. 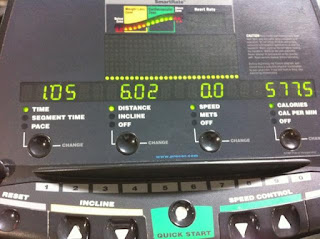 Then I still had to do the rest of my run... I actually started in a walk and increased speed every 30 seconds or so. My calves were REALLY struggling today. 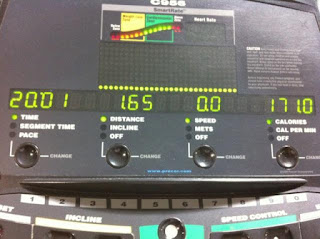 Happy with the mileage, happy that I managed to suffer and (mostly not suck) at the hill program.

L had brought her friend (the crazy one who went on our long run last week with us) to the gym. He seemed to think we were pretty hard core on the treadmill. Yup.

To answer a few questions from last entry (also answered in comments):

@ Average A - I love running in the Newtons! They are a lot more comfortable than my last pair of running shoes. I didn't have any adjustment period at all, but rumor has it that could be because I've done some running in Vibrams.
@ Silly Girl - I got the skirt as a birthday present!! It's different than any other one I have, I love it!
@ Alma F - Eeek... I dont' even know how many (running skirts) I have... Off the top of my head at least a dozen :D

As another aside - @ Little Fruit Fly - I've heard the Goonies song three workouts in a row now.

Random rant:
So one of the races that I registered for (a month or so ago) arbitrarily changed the date of the race to a week later. I found out only because the link on my blog was broken and when I googled there was a little blurb about it. The race director seems to think it's totally my problem and "hopes I'll figure it out." I even booked my travel (package through Orbitz). Still have not seen a refund from the race, and the travel... well, I guess I'm out the money. I don't insure my travel (I had no intention of missing) and the cost to change is just as much as new package. So.Freaking.Pissed. No other races nearby that I can head to instead. Question... Who is at fault here??
at August 31, 2010