It's all downhill from here...

Originally when we started the plan of 50 half marathons in 50 states, we were going to leave Colorado for last. Then W (crazy sister who is doing Ironman Wisconsin in September) added the Georgetown to Idaho Springs half marathon to her training schedule, so we decided to join her.

We live less than an hour from where the race was taking place, but it's one of those races that you get shuttled to the start line. So, even though the race did not start until 8:00, we had to get up at the un-godly hour of 4:32 am (I don't like my alarm to go off in 5 minute increments, don't ask why) to have enough time to get ready and out the door by 5:00. Which, by the way, we managed to do... out one minute early! Amazing how fast I can move (even at that hour) when I don't have a small child to get ready. I was pretty tired, I have not been sleeping well. I really don't get "nervous" before a race, but even when I try to go to bed early, I just find myself tossing and turning. I probably got 2 hours of quality sleep. At best.

The plan was to meet W and her friend Liz in Golden and then carpool the 20 or so miles to the start line. It's still pretty dark at 5:20 am. 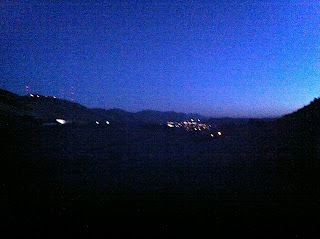 Liz had to park in a different lot, the one we were supposed to meet up in was full, but we met up with no problems - still running on our schedule. The shuttle busses to the start line were to be running from 5:30 to 6:30 and we still had plenty of time. We got to Idaho Springs and we were able to get a pretty close spot to the shuttle busses. Still dark. 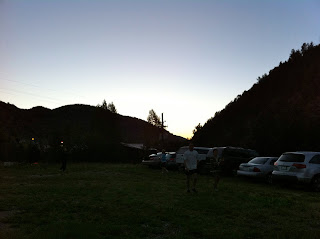 The shuttle busses were right around the corner and there were some port-o-potties with not much of a line so we decided to stop and use those before getting on the bus. I was glad to have brought my sweatshirt, even though it was supposedly low 60s, it was pretty chilly (what a change from last week!) The bus took about 15 minutes to get to the start line, and when we got dropped it was about 6:45 - more than an hour to start.


There was a tent with free coffee so I got a cup and then we huddled in a small building to try and stay warm. About 7:00 we decided to get back in line for the bathroom. Took about 20 minutes to cycle through so we decided we might as well jump right back in line (I'm glad I don't have to explain this process further to other runners, haha). The line was already much longer and we were thinking we might not have enough time to get through again before the race was going to start so we did our pre-race pictures while waiting.

We barely made it through the line before start time. I managed to lose both my sisters but headed up to what I thought was the middle of the pack. There were no pacers and no corrals, so everyone was just lining up willy nilly without any regard to pace or finishing time. I somehow managed to run into W in the pack (which is pretty irrelevent since I knew she would be off within a few seconds) but never did see L again before the race started.

The course was a loop through the town of Georgetown with the 2 mile marker being roughly at the start line before starting the descent to Idaho Springs. What a ridiculous first mile or so. I say "or so" because none of the odd numbered miles were marked - by the time I looked down at my watch it was already almost a tenth of a mile over. Anyway, since there was no organization to the start, I spent much of the first mile weaving in and out of super slow joggers or walkers - a lot of the time 2 or 3 people across. That just drives me NUTS!! If you know you are walking - get to the back of the pack! You have NO business being so close to the front! Anyway, it was as pretty chilly first couple of miles, but I knew that would mean it would be pretty close to ideal running conditions once we got out of the shade of the canyon. Water/Powerade stations were at every even numbered mile, so I stopped at mile 2, got a quick drink and within another half mile we were out of the canyon and into the real course.

There wasn't much shade on the course and not a cloud in the sky. I could tell that it was going to be warmer than I anticipated. The course is supposedly all downhill, so I was trying to pace myself even though it felt like I could literally fall down the mountain.

A woman offered to take my picture - I should have let her. I was keeping pretty good pace and for a fleeting mile or two thought I might actually have a shot of coming close to a PR. I finished the first 10K in under an hour... and it was all downhill from there. The course did not FEEL how I imagined it should. The downhill was REALLY downhill, on the "flat" parts of the course, the road was slanted and there were some pretty brutal uphills. I took my gel right before mile 6 and when I realized how dejected I was that the water station was placed a quarter of a mile further because I was THAT thirsty, I knew that a PR was out of reach. But, I still had a goal in mind of beating last week's time (duh, that shouldn't even be an issue) or beating my second best time - Deadwood. Miles 7 and 8 took us off the nice, paved street and onto some trail. THAT was tough. It was downhill and I spent most of the time looking at my feet to make sure that I wasn't going to twist my ankle by stepping on a loose rock or in a hole/crack. My pace FELT slow, and looking down... it was.
By about mile 10, my legs were SHOT. My quads were burning from the downhill and the uphills were sudden and steep and the switch in muscles I was using was tough. I was regretting the long(ish) run I had done the day before and my legs were just tired. Don't get me wrong, it was a thousand times better than last week - I never once considered dying on the side of the road :D 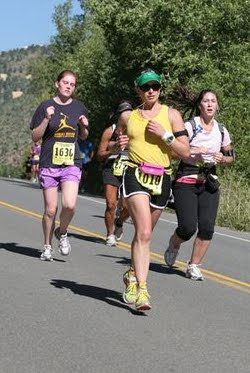 The aid station at mile 12 was actually a quarter mile early, and I needed it. Bad. I took a powerade AND water and then headed into the home stretch of the race. Based on my time, I still had a shot of getting my second best time, if I could just keep moving. I knew the final half mile or so of the race was through "downtown" Idaho Springs, so I had mixed emotions about the ridiculous hill going into town. Even though it so near the end, I walked up it, and then moved as fast as I could - still managing to sprint the last .1 to the finish. No official times have been posted but according to the Garmin, I finished in 2:11:08 - which makes my second best time, beating Deadwood by less than a minute. 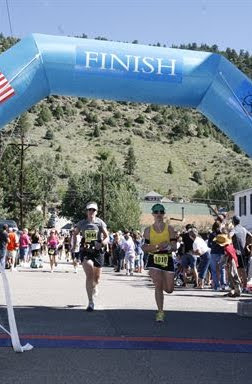 It was a decently long walk to the finish line extravaganza, but L found me almost immediately and we found my dad and my daughter - who had driven up to watch us finish. We got this nice post-race picture:
Nice re-useable bag with some freebies in it: 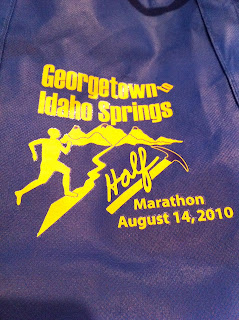 And a HIDEOUS race shirt: 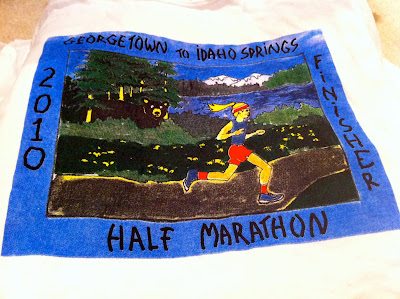 Picking up my drop bag was a total nightmare. I had to climb up some stadium seating and got a major charlie horse in my right calf. Knocked me (literally) on my ass. My muscles were super tight from the race and I sure felt it. The bag drop was totally disorganized. They had provided white plastic bags and they were just in a huge pile with no rhyme or reason to the bib numbers. Took me a good ten minutes to find my bag, considering most of the 3500 runners had left one. Blah.

With five half marathons complete, I'm now 10% done with my goal. The next two weekends are "fun" races, my next half will be in three weeks in Kaua'i!
Of note:
1. The wristband under my watch seems to have done the trick. I did not have any trouble with it at all. We will see if it still works in Kaua'i with all the humidty.
2. L actually beat W across the line, but without official results, we have no idea by how much, OR if she met her goal of finishing in under 2 hours.
3. I'm never doing this race again :D
at August 15, 2010