We signed up for Warrior Dash back in March. Somehow we had convinced my boyfriend, J, to run it with us, as well as some of my friends from California. I mean, jumping over fire? How awesome is that???

Our start time was at 3:30. We dropped off the kids at my parents house around noon, stopped for the "Lunch of Champions" - Chipotle, then headed up the mountain. Copper Mountain resort is about 75 miles from where we live. 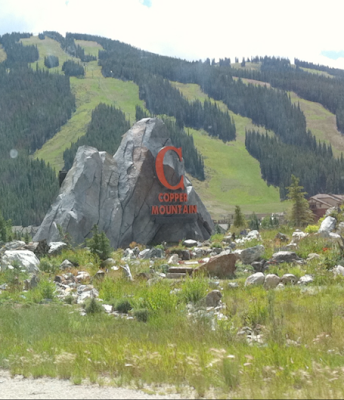 We parked and then took the bus to the resort. Lots of signage and of course we had to get some pictures along the way since I wasn't risking taking my camera on the course: 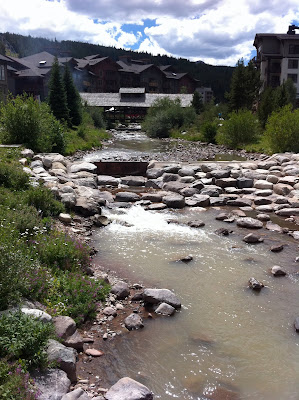 We managed to run into Jesse at packet pick up, and then we pretty much had to head back where the bus dropped us of. Julia and Jesse had rented a condo for the weekend with some friends and offered to let us leave our stuff there so we wouldn't have to head back to the car or do gear check. We pinned on our race bibs, put on our shoe tags, and did last minute pictures.
We head out to the start line to see if we can wish Julia luck... she was in the 3:00 wave. We get there and realize we can probably start early. The race is timing chipped, and our numbers are non-sequential... no one will ever know that we started 30 minutes early. We get to the back of the pack. The flames flare up from huge torches (instead of a gunshot?) and we were off... wide road at the beginning. First obstacle was climbing over abandoned cars. I was worried when J and L bolted off in front... then we hit the first parts of the slope. Rugged terrain. Loose rocks, grass, gravel. Next obstacle is a rope climb. Get up and the real hills start. Steep incline to the tower of bales of hay. Only time during the race that I regretted wearing a running skirt as I got stabbed near the crotch with hay. Next obstacle is the tires. My gait is short and I struggled a bit getting through. J was a professional (not fair, he was a football player in high school) and beat me through it. Then the nasty hills started. Long, long, LONG, hairpin turns of really narrow path. Hard to even think about running/jogging up. For two reasons. We are now at more than 10,000 feet in altitude and the trail is narrow and most people are walking it. I jog when I can move around people, L is already way up in front of me. I had passed Julia before ever hitting the bales of hay, but my true competition, Jesse, was gaining on me. I kicked it into high gear.
Hit the flat section at the plateau, and then the downill slopes. I had to be careful not to fall down the mountain. Very steep grade and still running on trail with lots of grooves and holes, not to mention the loose rocks. Manage to make it down without killing myself and I see the only aid station on the course. Slam a half cup of water, and then head to the messy part of the course. Crawling through mud... it's unavoidable because of the real barbed wire that forces you to slime under it. Manage to stay fairly clean above the waist, but socks and shoes totally trashed as the mud is easily a foot deep. Get out of the mud only to find yet another hill, made even harder by the extra five pounds of  mud and water I now have on me. I have mud in my nose and mouth. It's foul. Smells like a sewer. Next obstacle is the tunnel... uphill. And it's small. And covered in mud from the hundreds and hundreds of people who have already done the course today. I try to shake the excess mud off my arms and realize I have a cut on my hand... Whee, blood and mud. I'm so hardcore. Chick behind me yells "I love your skirt" and I say "runningskirts.com!" - then it's jumping over the walls. Most of the guys could just swing their legs over, but me being so short I had to pull myself up with my arms stand on top and jump off. But I was awesome at it - and faster than a lot of the other females.
Make it up the final incline and I'm headed up the rope ladder. Imagine if you will, what you see in military training with the ropes over a huge wall. Yep. Like that. Only we are not trained for that and the ropes are covered in mud... I am careful not to fall, and others are struggling with it more than I am (hahaha). I make it down the other side, jaunt across the balance beams and head to the creek. I didn't realize we actually had to wade through it (about a foot deep?) - but it gave me a chance to wash off my arms so I could wipe my face off.  Many people just stood there and bathed but I was on a mission to kick Jesse's ass, so I climbed out and booked it to the finish line. 3.27 miles of course later and I jump over the two fire "pits" and sprint through the chute... mocking the guy next to me about letting a girl in a skirt beat him (he did end up running faster... jerk).  Ran across the mats and got my awesome finisher medal and a banana. 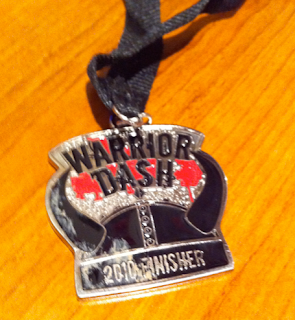 L of course had finished first... and she looked like she had it rough. Literally looked like she face-planted in the mud. Good times. Next across the line was Jesse (yep, totally kicked his ass, haha) and then Julia came across with her friend Mark, and J finished a minute or two later. Julia had some friends that came up that did not participate and they got some shots of us covered in mud - I'll post those after they send copies. We stopped and picked up our awesome shirts and Viking hats: 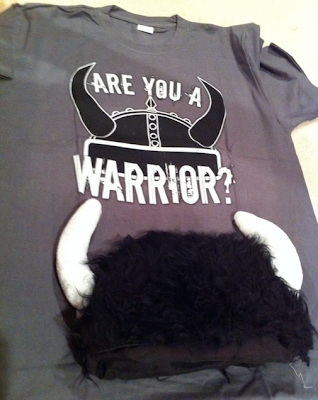 We headed toward the "Warrior Showers" at the end of the course. Meaning, they had a long "tent" with sprinkler heads coming out the roof. Since I was wearing a sports bra I just took off my top layer, and tried to rinse off. Coldest freaking water in the world. I knew my shoes weren't making the journey home, so I got off as much mud as possible, threw my shoes in the donation bin, and we headed barefoot back to the condo to grab our stuff. Never been so dirty in my life. It was awesome.
at August 21, 2010