I signed up for the SkirtChaser 5K a while back - I was super excited because I am usually out of town when the race is here. I mean, $50 for a race, a skirt, AND a pint glass? What a deal!!

L was not going to participate, but I convinced her to sign up... and to join me in wearing monkey knee socks! We had a little trouble getting to the start because mapquest on the iPhone suuuucks, but we got there, found an inexpensive parking garage and walked just a few minutes to the "block party." L got registered, we picked up our bags, and we still had about 45 minutes to kill before the race started. We got in line for the port-o-potties... and they were the best ones ever - they actually flushed! Wow! Guess that's what happens when you have a race geared toward women??

We started in the middle of the pack, and there was still quite a bit of "dodging" the first half mile or so. I will never be able to figure out why the walkers think they need to be in the front of the pack!!
It. Was. Hot. Like seriously hot. 98 degrees when we last looked in the car. And no shade on the course. The course was a sort of loop that doubled back along the streets of Cherry Creek, a suburb of Denver. There was not a lot of shade and the course was pretty hilly. I was feeling ok the first mile, but I was pacing pretty fast and getting VERY thirsty. There was only one water station on the course, just before the two mile marker. I walked through that and got stuck with a cup of XOOD (omg, the most vile tasting liquid in the world, BLAH) instead of water. It made me feel a little nauseous and I ended up walking a bit more because I felt like I could throw up.
I had not expected the course to be as hilly as it was, and I was super tired and hot and not feeling great, especially after the unexpected drink at the water station. I still managed a decent pace, and the last part of the course (thankfully) was downhill. Physically I was feeling pretty good (except for the heat stroke and dehydration, lol) so I was going pretty fast. I sprinted the last section and crossed... and... even WITH walking at least a minute or two of the course, I set a PR!! Officially the time is 28:17 (almost 30 seconds faster than my PR last winter). Woo hoo! And L totally rocked her only 5K, finishing in 25:30.
The block party was worth the money - they had free beer from a local brewery, free Chipotle, and quite a few vendors. Not to mention a band! We stuck around long enough to eat, but then headed to Denver for the AFI/Green Day show! They put on an AWESOME show! (And yes, L and I were too rushed, hot, etc to even change, so we still wore our running outfits to the concert). 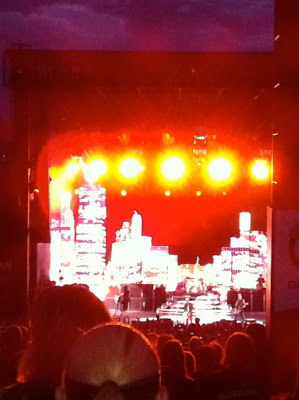