Since we were in a hurry, there was of COURSE a ton of traffic leaving Chicago. It wasn't football traffic because we were headed away from the stadium. I'll tell you this, I will NEVER live somewhere that has traffic like that as a standard on Sunday morning. Ridiculous. And stressful. The drive was LONG. And boring. The big excitement was guessing how much the toll was going to cost. Really? 65 cents... 80 cents... make it an even amount. So stupid.

My dad wanted us to text him when we were close, so we sent a message when we were about 20 minutes away from Madison. He told us to meet them all at my grandma's house. Not knowing what the day had in store, we made a quick stop at Culvers to get butter burgers (and fries :D ) to go.

My super awesome sister, Wendy, had been training for about a year to compete in her first Ironman competition. When we arrived at my grandma's house, the kids were bouncing off the walls, and we weren't totally sure where on the course she was. We knew she was somewhere on the bike, but due to the parking and traffic, we wanted to be sure that we wouldn't miss seeing her at the tail end of the bike - about a mile before transistion to the run. Since the event took place in the downtown area of Wisconsin's state capital, pedestrians (both spectators and otherwise) had to cross the course at many different points. Pretty scary running with kids in between cyclists cruising down the last hill!


We saw Wendy cruise by after a while.  Here is a YouTube video of her cruising by:

We packed up all the stuff, grabbed the kids, and hurried over by the capital, hoping to catch her after transition in the early part of the run. We thought the first viewing point on the (west?) side of the capital was about a mile in. It's hard to get anywhere fast when you are toting three small children, but we did our best. We found a spot right by an aid station, and watched the runners for a while, but never did see Wendy. Dad and L headed over to Starbucks, and Jeremy and I went to Walgreens to stock up on snacks and drinks for everyone.

We started walking thinking we would catch her again around the 10K marker, but missed her again! Headed back and found a spot (maybe this is the "State Street" Wendy mentions in her blog) that we thought was about the halfway mark. The course for the run seemed bizarre and doubled back on itself a lot. We would be able to spot her at least twice along this section, and she may have also run it in the beginning. 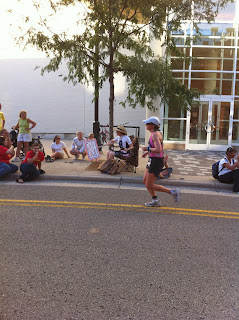 We knew it wouldn't be too long before she came back around the loop. Two of the three kids had to go to the bathroom. Problem is that a lot of the businesses were closed for the event (or because it was Sunday?) and many others had signs posted about no public restroom. I took Alex and Ariel down a few blocks away from the crowds and managed to find a bar (with VERY nice bathrooms) that had no problems with us using their facilities. Thanks :D

Headed back, got the signs ready. This time, I got a video of her running by... Keep in mind she has been exercising for... oh, about 13 hours by now? Look how great she is doing!

We knew we probably wouldn't be able to spot her along the course again for a while, and by now, the kids were DONE. We had about a mile to walk back to the car, and headed back to feed the kids and put them to bed before heading back out to watch her finish the race. All the kids went down pretty easy, except Adam had a nightlight issue and Alex seemed to be getting a cold. Ariel, on the other hand, passed out almost immediately. I went down the street and picked up Rocky Rococo for dinner. We scarfed down the pizza and cheese bread (faaaabulous) while Dad and Jeremy picked up Wendy's bike.

Jeremy planned on staying down at the race, my dad came back with the van to pick up me and L. We had last minute instructions about grabbing Wendy's bag tag and parking at the convention center so she wouldn't have to walk very far. The finish line was beyond chaotic. There was NO way we were going to be able to get to the actual finish line, so we placed ourselves at various parts of the final stretch before the chute to get pictures, etc. I took another video:

Her main goal was to finish in the 17 hour time limit, but she ROCKED it and finished well under that (and I think pretty close to her "real" goal). Here she is crossing the line:


She is awesome. No doubt about it. I cannot even FATHOM doing what she did during this race! Makes my stress over my marathon (without the added 2.4 mile swim and 112 mile bike ride) look ridiculous. I'm so proud of her!

After the race, she was in good spirits and still able to move around :D
at September 16, 2010