We didn't have any firm plans, other than doing our long run in the morning. We made sure to get up EARLY so that we would be done before it got super hot. Sun was just coming up when we got to our usual parking spot. 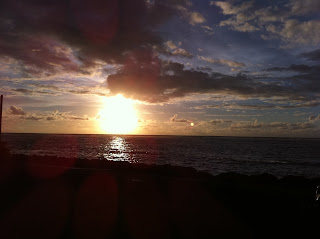 The run actually wasn't too bad. We headed to the usual ending point about 3.3 miles out, and then instead of stopping at the car we continued on the trail in the other direction. Ended up doing more than 8 miles. It is just SO beautiful here! 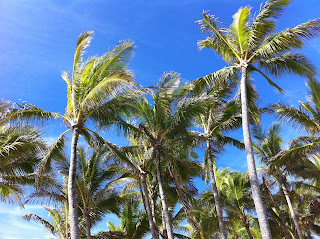 We got back to the hotel and while deciding what to do for the day I found a company in the coupon book advertising "Snuba" - a combination of snorkeling and scuba. It didn't seem very expensive so I called and was able to schedule an afternoon "dive" at 2:30. That gave us a few hours to kill, so hung out for a bit and had lunch at Panda Express (yes, even in Hawaii). Then we drove down to the south shore... again!!! The guy had said to just look for the Snuba van on the side of the road, and sure enough... they operate almost entirely out of the back of their van. 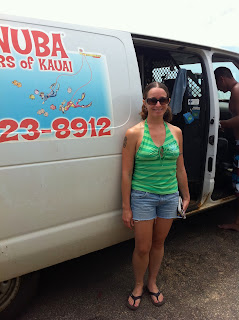 I don't have a shot of me in full gear, but we did get a personalized DVD that they are mailing to me. I can probably get some super awesome still shots from it.

Anyway, Snuba is REALLY awesome. For anyone who has the opportunity to try it, I highly recommend it. We were lucky to be the only ones in our time slot, so they were able to be very one-on-one with us, but they taught us the hand signals and worked with us to make sure that we were comfortable before going out. It is VERY unnatural to try breathing underwater. I have probably never concentrated so much on breathing in my entire life. Once I got the hang of it, I tried not to think about it too much.

The fish were amazing! So many different types, so many colors... most of them looked like cartoon fish! It was absolutely like being dumped in an aquarium. I would do this again!!

The whole experience took about an hour, so we drove back up north and then showered and decided to hit up the craft fair in Kapaa. We had been obsessed with trying a coconut drink since the last time we visited and we figured we could get one there... and we did... made from "scratch" right in front of us: 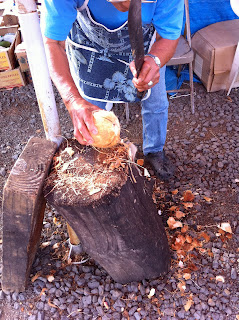 I have to say... I was a little disappointed. I don't know what I actually expected, but it wasn't as good as I thought it would be. 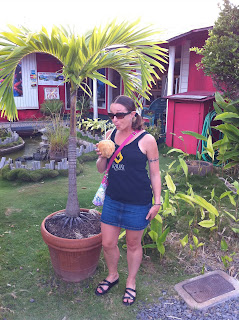 I managed to get some jewelry, blanket, and yes... another dress at the craft fair. Then it was back to the Olympic Cafe for yet another BBQ chicken sandwich and some waffle fries (sensing a pattern yet?)

After dinner, another quick stop at the grocery store to pick up more bagels for breakfast and then some tv, reading, early to bed.
at September 15, 2010