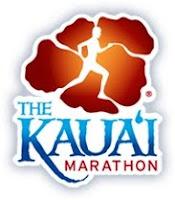 Wake up came VERY early for the 2nd annual Kauai Half Marathon: 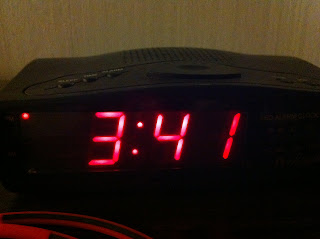 The race started at 6, but they started closing roads at 5... and we had a 45 minute drive. So, better to be safe than sorry, we ate a quick breakfast and then headed down to the start. It was still very dark when we arrived, but there were TONS of volunteers directing everyone where to go. We grabbed all our gear and then headed out to the pre-race area. No lines at the port-o-potties first time around... and we were PSYCHED to see port-o-sinks... who knew?? 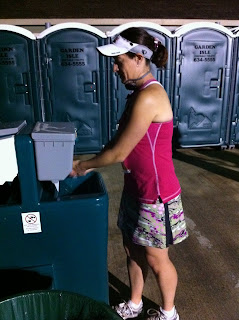 They had a breakfast spread with fruit, bagels, cinnamon rolls, coffee, juice, etc. After a second trip to the bathroom, we headed to the start line, taking pictures along the way. 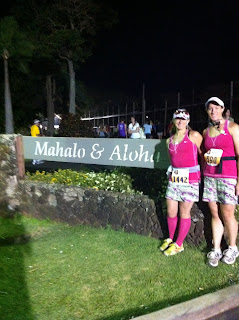 I'll admit. I've been mildly terrified about this race pretty much since I signed up for it. Of course, back then, I had signed up for the full marathon, then chickened out after seeing the elevation profile. Even the half was mildly intimidating, boasting somewhere around 1,100 foot elevation gain. So I decided the best strategy for this race was to have NO expectations. If nothing else I was in KAUAI, and I knew the scenery would be absolutely amazing. I intentionally went out slow, as I knew all the hills were towards the middle of the course and I didn't want to wear myself out.
The first few miles were going pretty well, and I didn't even get passed by Dean until at LEAST mile 2 (of course he was cheering everyone on at the start line and probably was the last person across the line, but still :D )... until about mile 3. My feet fell asleep. Both of them. At first it was just sort of annoying, but then it was feeling pretty painful. It didn't help that the inclines were started. I was worried I wasn't going to be able to finish running, that I would have to walk quite a bit to get the blood flowing better. 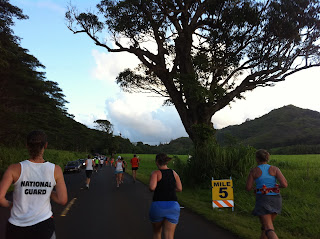 I managed to run past Laura Yasso (also in an adorable running skirt) and then headed up passed mile 5... I knew in advance that this was going to be the toughest part of the course. I also knew that I had been doing tons of hill training and that I might (just might) be better off than some of the others. We came around the bend about mile 5.5 and I'd say most of the people (at least 2/3 of them) were walking at some point, or jogging SO slow, that walking might have been better. I made it pretty far before I started walking and decided to take the time to eat a GU and take a few "still" pictures: 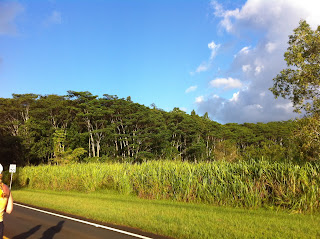 The GU must have kicked in, or the hills must have subsided because all of a sudden I felt GREAT. Not just good, but GREAT. I was actually enjoying myself, I didn't feel tired anymore, and I was RUNNING. I am not a fast runner by nature, not at all. But I was running sub 9 minute miles, and not getting exhausted. The miles flew by and I was really able to enjoy the scenery even more. The course took a turn through a residential area, and it was amazing to see all the locals sitting at the edge of their driveways cheering us on.
Then we FINALLY got the split where the marathoners went one way - according to those who have done the race in the past - "literally up a mountain" and the half marathoners went the other. It was clearly marked:
Coming around the bend there was an aid station and the LAST of the hills... a short one (and of course the photographers are RIGHT at the top of the hill...) 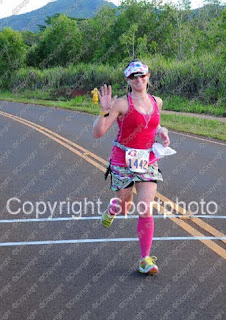 Around the bend and I could FINALLY see the ocean!!
Finally getting close, and I know where the finish line is... quick spring along the ocean, and then... DONE!! 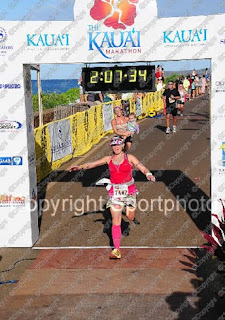 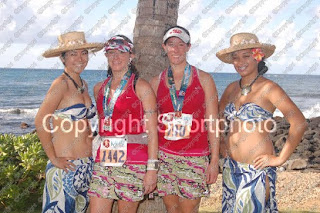 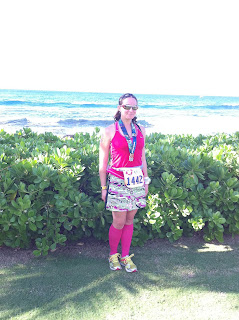 We then got on the list for the free massage (and actually my first massage EVER) - which turned out to be a brilliant idea.
The post-race food/entertainment was awesome! They were fully stocked in everything, from soda to water, to sports drinks, beer, food, etc. This was by FAR the best organized race, and even though it was tough, probably the one I enjoyed the most. Plus... cool finishers medal: 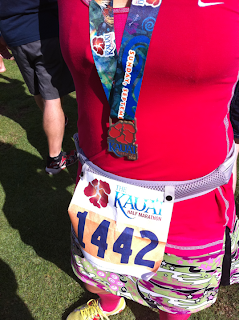 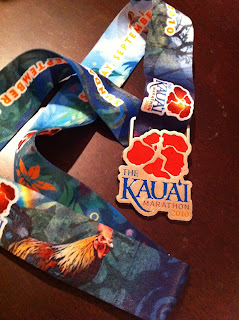 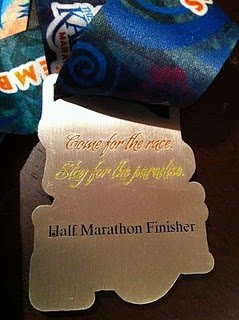 Post-race party at Kalapaki Joe's... but that wasn't going to be for a few hours. So, we headed back up north (again) after hanging out and watching awards and such. Showered and then did some shopping. Kalapaki Joe's was back on the south side of the island, so yet another 45 minute drive. We didn't really talk to anyone, but the atmosphere was great... amazing view, food, and beer: 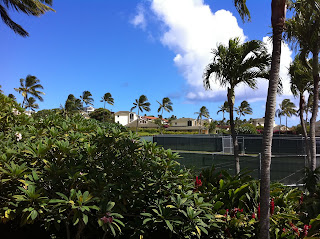 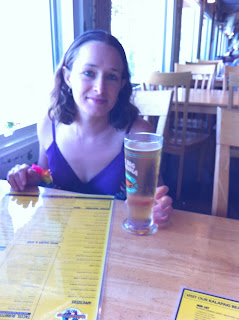