Our plane landed early in Denver. The plan was for my mom (who along with my dad and boyfriend had been watching my daughter this entire time) was going to meet us at the airport. We had this... somewhat crazy schedule. My super awesome sister was participating in her first Ironman competition on Sunday, and due to our other flight schedule, it made sense to really not leave the airport (45 minutes from our house) and head out to Wisconsin to watch her race. So months ago I had booked a ticket for me and my daughter to go out there. And then through a friend a while later I heard about the Chicago half marathon that was to take place early on Sunday the 12th. In a somewhat selfish move, I decided that I could do that race and then rush over to Madison and see most of my sister's race. Sigh...

So. Back to the crazy planning. Nothing is ever as easy/simple as one hopes. So, in order to participate in that race, my sister had to fly alone to Chicago (on an earlier flight) to be able to take a cab from the airport to the Navy Pier to get to the expo to pick up our packets - no race day pick up for a race of that size. My connection was longer, about 4 hours. So my mom and the kids (my daughter and niece) made a trip to Target for last minute trip essentials (books, socks, and of course a Starbucks iced coffee). I treated everyone to lunch at Panera for the hassle of the airport nonsense. My mom dropped me and A back off at the airport a few hours later... and off we go to Milwaukee, WI. 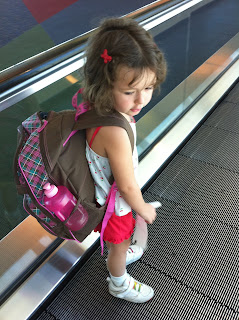 Had an uneventful wait for the plane, A kept herself occupied with her new crayons and coloring book (she is getting sooo much better at coloring, she can finally stay within the lines for most things!) 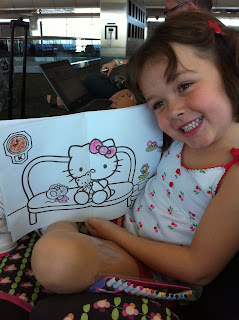 Nothing too exciting on the flight either. I read "The Perfect Mile" and A watched "Ratatouille" - also enjoyed that Frontier still serves a cookie. Yum.

Next part of the crazy plan... my dad and grandma drove from Madison to pick up A since I wouldn't have a sitter to watch her during the race (thanks, Dad). I was digging through all my paperwork and couldn't seem to find my rental car info... apparently I never rented one. Strange. Luckily there was no trouble getting a car, and then I was off, heading to Chicago (in yet another Ford Focus) to the hotel. Drive was long and boring, and I was getting hungry. Made good time, there was no traffic.

Got to the hotel, finalized check in, and then headed up to the room to meet L. We headed down to the hotel's restaurant and I ordered some spaghetti and meatballs, garlic bread and a salad (with fruit for dessert) for pre-race carbo load. Also had my one beer.

By now I'm completely exhausted. What a ridiculous day of nothing but travelling. Quick shower and then get everything organized for the morning.
at September 16, 2010