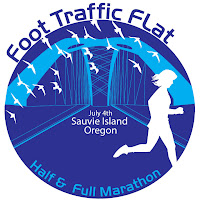 Heading to Portland for half marathon #3 - the Foot Traffic Flat Half Marathon was the first 24 hour turnaround race we had planned. Headed to the airport late Saturday morning. Parked, took the shuttle and got there with plenty of time (with seemingly a lot of stuff for just one day). 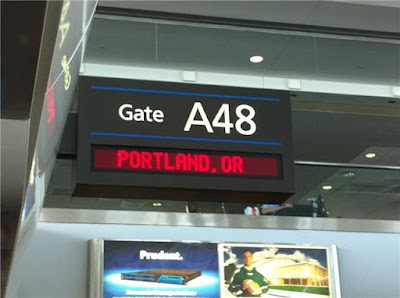 After a ridiculously disorganized boarding process, we managed to leave relatively on time. I was mildly panicky on the flight - first, there was a TON of turbulence (especially at take off) and second, I sure didn't book this with a lot of leeway to get to things on time. We watched a movie on the plane (which makes time fly by) and shortly before landing I see this: 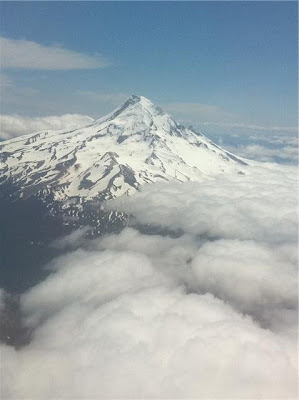 Get to the rental car counter - and yay, no lines - we had almost 90 minutes to get into Portland to pick up our bib/race packets. Luckily I had pre-mapped all the places we needed to go and got there in plenty of time. What a disaster it was! I mean, picking up the packet itself was decently organized, but... I'm used to an actual EXPO. This was a teeny tiny store that was trying to house hundreds of people. I had originally planned on trying to get some new shoes but the sheer number of people made that impossible. The free beer was nowhere to be seen (sniff, sniff) and the race shirt was "unimpressive" 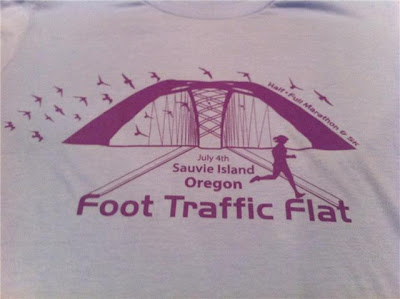 We headed into Vancouver to see if we could check in early to our hotel. They let us check in, and we headed to Fred Meyer to pick up some stuff for breakfast (including "make your own peanut butter" - which was a smashing success). We were absolutely starving by 4:30ish, so we mapped the closest Olive Garden. We ordered the stuffed lasagna (and it was fabulous): 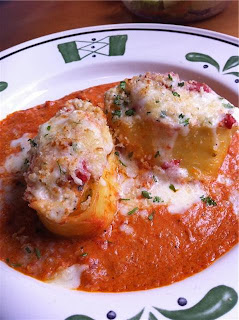 Stopped at Target to kill some time on the way back and then settled in to drink some beer and watch tv: 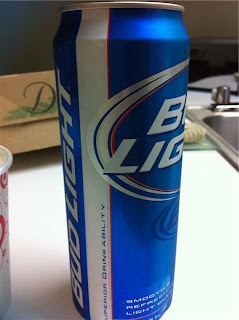 Tried to get to bed around 9:00 as we had a super early start. Could NOT sleep. I've been getting over a cold and every time I laid flat I felt really congested and had a tough time breathing. It was hot and stuffy, so I turned on the AC. Then of course, we somehow (again?!) ended up sharing a single (this time a QUEEN) so it was not the best night. Tossed and turned and woke up for good just before the alarm went off at 3:57 am. We were supposed to get to the host hotel to catch the shuttle at 5:00, and according to the mapquest, it was only a 17 minute drive. We assumed we had plenty of time... but then we got lost. Somehow missed the final exit and ended up driving around for an additional 15-20 minutes. Luckily there were two sets of shuttles and we got on a bus around 5:20 for the one scheduled to leave at 5:45 am. We had noticed the night before that the shuttle was supposed to drop us right at the start line (and being on the later bus we'd get left at 6:25 - 20 minutes before gun time). Here we are getting ready to get on the bridge to Sauvie Island: 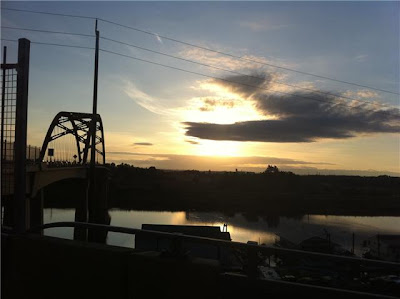 They are NOT joking at all when they say "there is a lot of traffic" and "carpooling is recommended." Had we not been on the bus there is NO WAY we would have made it to the start line on time. The traffic jam getting on the island was literally MILES long. As it was, we were dropped late - at 6:41, not really leaving enough time to do anything, but using the port-o-potty is a #1 priority and I'm not fast enough to *really* care about gun time. Luckily, due to the sheer number of folks stuck in the traffic jam, they started the race 15 minutes late, which worked out nice. L and me with 10 minutes until (late) start: 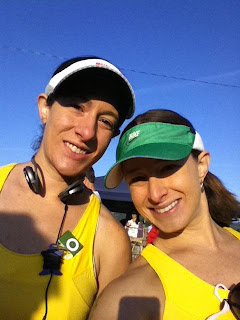 Except... the beginning of the course is where all the people stuck in traffic were stopped. So hundreds of people are trying to run around stopped cars on one lane of traffic and in the grass on the side of the road. Not ideal. But, I did get to see "Team Edward" early on (happy to report I was faster than them and never saw them again, lol): 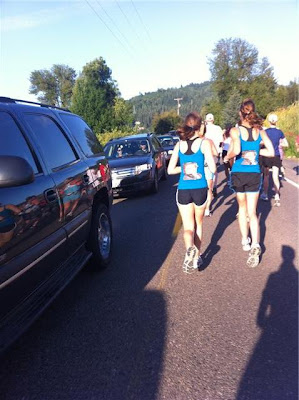 The course is advertised as "flat and fast" - so I was disappointed when I hit the Garmin at the first mile and saw my split as 10:20... which is NOT fast. Luckily, after the first 1.5 miles, the course FINALLY opened up and I was able to get into a better (and MUCH faster) groove. The course was... sorta blah, but some parts were really pretty - this was about 3 miles in: 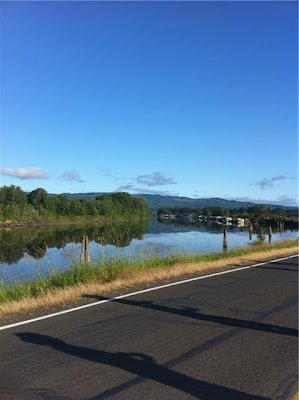 The course was certainly flat (as they said) and the aid stations were every few miles, and had a lot of volunteers working. I was disappointed that they only had water at them (no gatorade?!) and luckily I found Hammer gel at the 4 mile station (which I saved for the halfway point).

It seemed like ideal weather conditions with temps in the mid to upper 50s. Noticed that it looked like it was going to be a REALLY sunny day. The course was not very shaded and I certainly started to get tired towards the end. But I also set some records! I finished the first 10K in under an hour (which I have never done) - I was going pretty fast (and was hoping I wouldn't bonk) - with splits around 9:30 (which is a TON faster than I normally do). Then the "real" problems started. First off, I have the Garmin Forerunner (405) that I absolutely adore. When it works right. About halfway in, I have trouble getting the Bezel (and also the lap button) to work. I *know* I am slowing down but I am obsessed with getting my mile splits in and for about 3 miles, I cannot for the life of me get the watch to work. Luckily around mile 9, it decides it wants to work again... which let me into the second problem.

Apple makes CRAP iPods. I know, I know. I've said it over and over, and yet I keep buying/using their stuff. Pretty things and clever advertising gets me EVERY.SINGLE.TIME. So at about 9.3 miles in, the left headphone starts cutting out. I'm thinking - "Wow. That's annoying, at least I can hear out of the right" - and less than 5 minutes later that one goes out as well. I carry my phone on me (yes, an iPhone) and luckily the headphones work and I'm not totally left without music, although I did hear some repeats as a result. If you aren't keeping track, this is the FOURTH problem I've had with my shuffle (and the connecting piece you have to have just to operate it) since early February. Ridiculous. Clearly the product is NOT meant to be used if you actually move around. Anyway.

I knew pretty early on that was long as I could just keep going, I was going to hit a personal record (again) - and I did!! Apparently this is 5 seconds off from gun time though, I was a bit slower - but this is almost 7.5 minutes faster than the my previous best!! 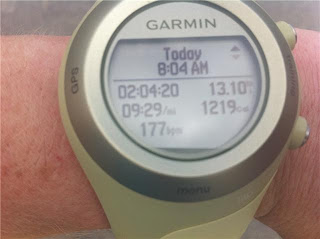 Crossed the mat (there were three of them, so not sure which one was actually for the half, which might account for the 5 second difference) and got my awesome finisher's medal: 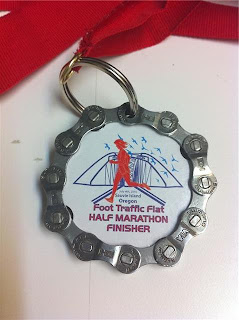 Found L pretty quick, tried the famous strawberry shortcake (and it was every bit as delicious as advertised). We got our picture taken while waiting for the shuttle bus to fill so we could leave: 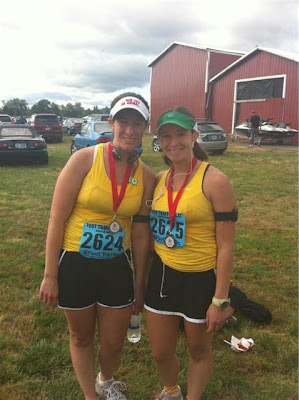 L and I both hit PR's (if she had a watch I'm sure she could have gone under 2 hours):

A few things of note. I need to allow more time in between packet pick up and getting to a shuttle (or start line). I do not like feeling stressed and panicky!! Everything worked out THIS time, but I just need to double (or triple) how long I think things might actually take. Oh. And I'm getting pretty good at this whole "running thing" - ha :)

The sticker I've had for months finally went on Bee Rad: 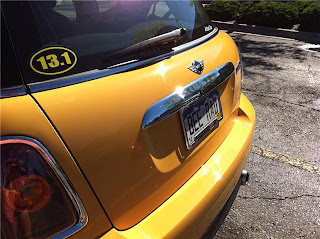