I must be crazy. I certainly can go to the gym on Fridays, but I've been running outside anyway, even with tempertatures hovering around 100 degrees. I decided I didn't want to run anything I've done before, so I decided to try the other section of Big Dry Creek Trail - that we can't quite figure out how to get to from where we currently run. When I headed out: 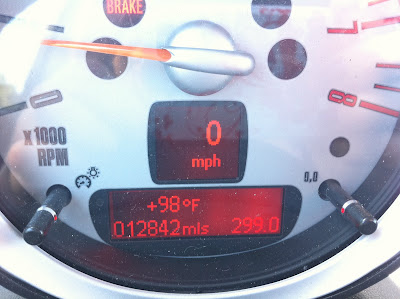 I know I said a few weeks ago that you wouldn't catch me running in a bra top very often, but with it being so hot, I'm glad I have them: 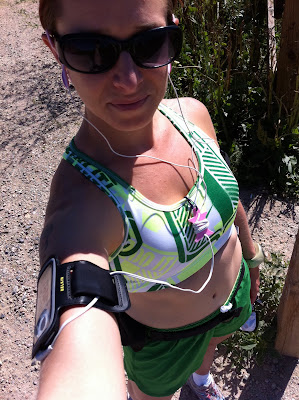 You might notice I have the iPod shuffle replacement. Yep. I'm a total sucker. This time I'm trying the iPod Nano with an armband. It seems to be working well, although the case drove me nuts. I don't know why they don't keep in mind that you might need to adjust your volume while listening. I had to cut a hole in the plastic for wheel operation. I *swear* if this doesn't work I'm giving up on Apple...

Anyway, I was glad I remembered the water bottles for the fuel belt this time. There wasn't a cloud in the sky so I knew it would FEEL hot. I've been sort of tired and SORE all week, so I didn't head out very fast. It was hot enough that I was pretty much the only person out. I saw one or two guys on bikes, and a woman walking, but no other runners. It was pretty enough out, but it was OPEN space so no shade at all and not a whole lot to see: 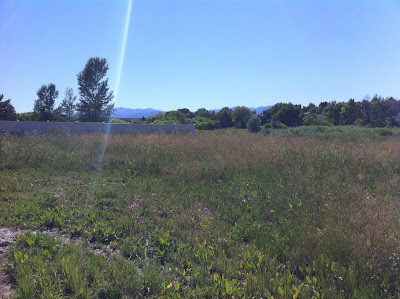 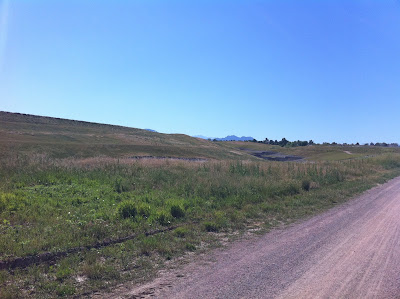 I didn't want to be out longer than an hour. First, because I need to pick up A before dinner time. Second, it's ridiculously hot. Third, I'm sore and tired and not super motivated to be out. I'm running ONLY because it's on the schedule and I need the mileage. The way out was HARD. After the first mile, I could tell that I was running uphill. I don't enjoy running uphill anyway, but certainly not when it is sooo hot. I took more walk breaks than I usually do. I had no idea how far the trail even went, but I hit a good dead end point when I got to Standley Lake. REAL BATHROOMS WITH REAL RUNNING WATER! SCORE!!! 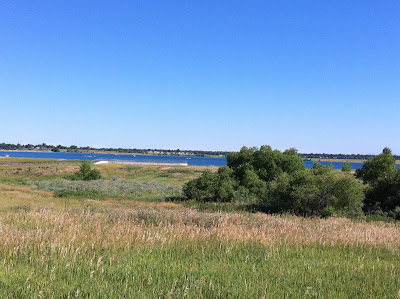 Definitely a good turn around point: 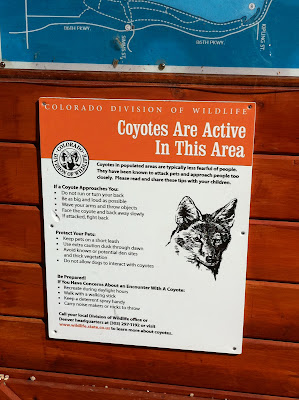 I knew the way back wouldn't be quite as hard because there would be some downhill. I actually was doing a pretty decent pace (all things considered) and felt pretty good. This is the last bridge, less than a quarter mile to go until the car: 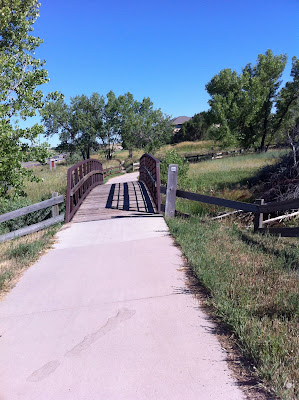 Got back to the car and as I was unloading (and rejoicing at being back!) I realized that I had lost one of my water bottles. GRR!! I knew I had it the last time I took a drink... so I had to head back out and go find it. Those things aren't cheap! Luckily it wasn't that far back, maybe a quarter of a mile round trip. I didn't stop the timer for my bathroom break at the halfway point, but it was still slow going.
at July 18, 2010