Another scorcher outside. 86 degrees when we headed out (on time for once!) and I was immediately not feeling it. I didn't sleep well the night before (camping in the backyard with my daughter, didn't get much sleep). The first few miles were ok, but SUPER hot. We got to the turn around point and had some Gu. L likes "Espresso Love" 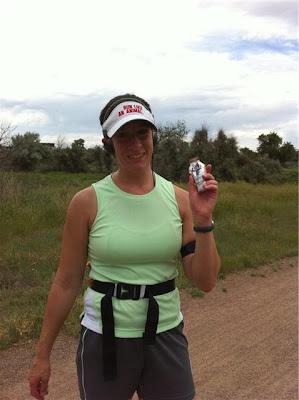 Heading back we noticed it was getting really dark over the mountains. Pretty psyched with the cloud cover, that meant it would cool down a bit. With about 3.5 miles to go, the wind picked up and we spent the last 40 minutes running against winds strong enough I thought my hat was going to blow off. Not amused. 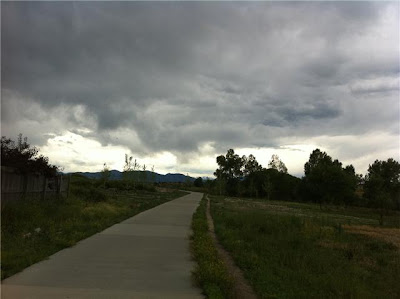 Humbling to have a sort of crappy run after having so many good ones. The goal was 10 miles in under 2 hours. We managed, but it wasn't easy. I wish there was another area we could run, I'm getting sort of sick of the path that we run, but it's the most convenient for us.

And in other fitness related news? The Vibram FiveFingers... THEY'RE HERE!! 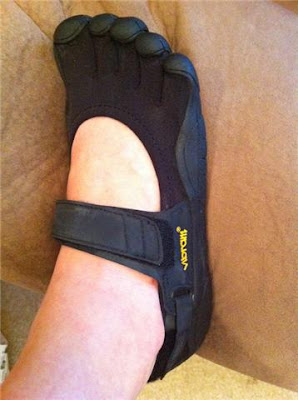 I haven't had a chance to actually run in them yet. I wore them around the house on Saturday afternoon trying to make sure they were the right size - it's HARD to get my toes in these things! Then I wore them out and about a bit on Sunday while running some errands. They are certainly "different" - but I think I like them. I plan on testing them out for a mile or so on the treadmill before I do my hill workout.

Random fitness part two - got "rejected" from Gu on my sponsorship request. Discouraging. I understand that companies want really kick ass people to represent their products. I wish I was faster too! Maybe I could get a second look from one of these companies. Sometimes it's REALLY discouraging to be average. Blah!!! At least they sent me a code for 15% off. Of course I have to spend $100 on product to get free shipping.