This workout could also be called "Hello, Calves." Without having changed any other part of my workout, I have to assume that my calves being sore are from the Vibram FiveFingers I've been testing out. I have only run the one (treadmill) mile in them so far. I got off work early, and decided to do the Davidson Mesa Open Space loop (just under three miles) to test them out on trail. It was super hot again when I headed out around 2:30 - it was 93 degrees! I grabbed my skirt... only... it was my compression shorts (and by short, I'm talking "boy shorts" short) instead. Blah... ok. 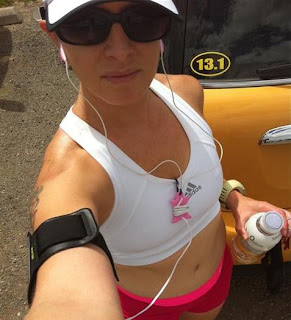 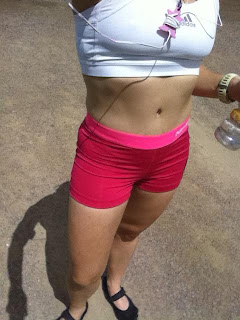 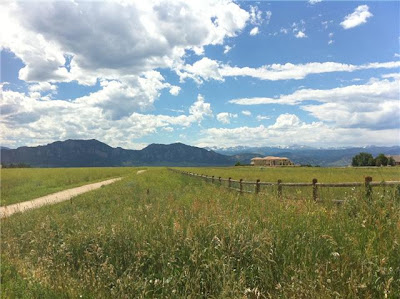 Thanks to the cloud cover, it didn't feel quite as hot as it actually was. The compression shorts totally threw off my vibe, and when I realized my regular pouch wasn't going to work and that I'd actually have to run with my fuel belt (even though I forgot the water bottles and was just going to run with a regular one), I ended up forgetting the water altogether. I realized it a few minutes out, but being pressed for time, I figured I'd be fine for 30 minutes.

So. First trail run with the Vibrams. They actually felt better than I thought (assumed?) they would. I certainly could feel it if I stepped on a larger pebble or something, but they didn't "hurt." And by hurt, I meant that the first few days I walked around in them, a plastic piece in the back kept rubbing on my heel. I had applied Bodyglide on my feet (specifically on the sides and heels) and I think it must have helped. Pretty day out: 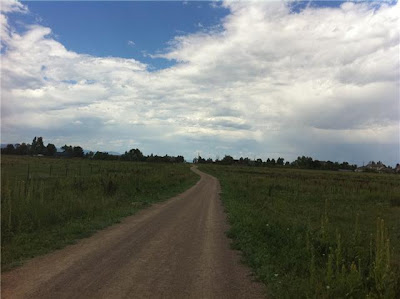 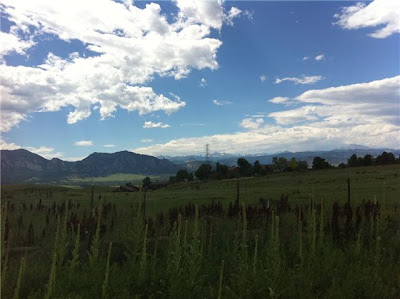 With maybe 2/3 of a mile to go, I noticed a pain on the ball of my right foot, and a bit of pain along the heels. I of course pushed through and finished in just over 30 minutes. After I got back to the car, I took off the shoes and could see some blisters on my heels. Lovely... I haven't had blisters from running... well, ever. So now I'm either in the market for some type of sock-like contraption that will work with these shoes, or more training/suffering while building up calluses? Undecided.

Such is Wednesday. Well, after my run earlier, I met up with L for her company picnic. Catered by KT's BBQ, I tried not to overeat (I just love BBQ though!) Had a few ribs, sausage, chicken, potatoes, salad, veggies. Delicious! My parents dropped off the kids and after feeding them and letting them play at the park for a bit, we had to drive home and get ready for the gym. I apparently went the wrong way, got stuck in traffic and it took me over 40 minutes to get home (we're talking 10 miles? maybe 12?) Long story short, with everything going on, we got to the gym late. After a brief warm up, my calves were STILL killing me (yeah, because I expected my run earlier to fix that?) I started the run and was hot and fatigued - which seems to be the norm. It was a tough run, and I'm actually a bit surprised that I managed to get through it as well as I did. 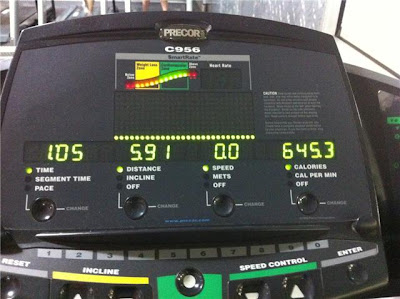 Most fun part of the long run on Wednesdays? THE RUNNING SKIRTS!! Here we are, "matchy matchy" again: 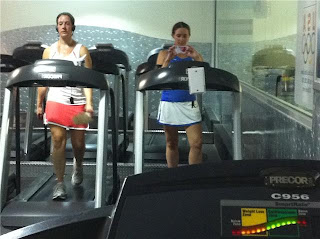 In other random fitness related news.

In my never-ending quest to find awesome fitness apparel/accessories, I had come across some compression leg sleeves, manufactured by Zensah.  They could NOT have shown up at a better time for me to try out - remember, severely sore calves? I got them specifically to wear with the Vibrams - I wanted something footless, just in case. 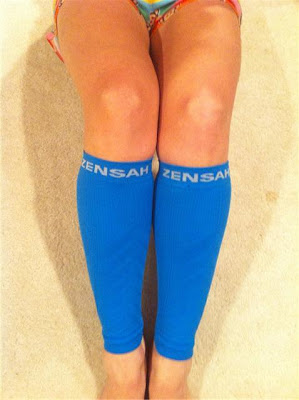 So far, I give them an excellent rating! SO comfortable!!!

One more thing... I'm super psyched to report that we got into the BOSTON HALF MARATHON!!! No, you don't have to have a qualifying time for it, although they do kick you off the course if you can't finish in 2:30 - I have never seen a time limit under 3 hours for a half, so that is pretty intense. The race sold out in only 2 HOURS, so I'm glad that I registered as soon as I got to work in the morning. I'm excited to be a part of the 10th annual race - taking place on 10-10-10, how cool is that?? Which brings me to part two...

So my goal is to complete a half marathon in all fifty states. As you know, travel is NOT cheap. So being out here in the west, so far away from SO many states, means that I will have to do some double headers. Getting accepted into Boston means I will also be doing the ING Hartford half marathon the day before. Any suggestions you can pass on for training for this would be appreciated! I want to be sure I don't tire myself out too much. With Boston being the second race, I need to make sure I finish in the time allotted.

Lastly, I'm *SUPER* close to reaching my donation requirement for my entry into the Athens marathon (which is coming up right around the corner on October 31). Here is the link for my donation site. $1, $5, any amount helps.