It was going to be a LONG day. The problem with not booking your own flights is that the person who IS booking often cares more about price than schedule/convenience. I wasn't that amused to have a 6 am flight out of Denver, only to have a connection in Cincinnati - for FIVE hours, plus ANOTHER connection later in Paris before arriving in Athens, Greece.

So the plan was to meet Nicole at the airport around 4:00 am. Meaning... I of course had to get up earlier than that. Blah. I was up at 2:55 am, which gave me time to double check my bags, get ready, wake up J, and drive to the airport. What they DON'T tell you is that Delta doesn't turn on their check-in computers until 4:15. So even though I was there on time, I had to stand around and wait fifteen minutes just to check in. Gave me a chance to chat with Nicole and her dad a bit. Finally, we got our boarding passes, checked our bags, and we were on our way.

Flight left on time, around a two hour flight to Cincinnati.

I was REALLY unimpressed with having such a LONG layover. Five hours??? Really??? I didn't want to be sitting around for that long since I still had a VERY long flight ahead of me. So I paced the airport. Literally paced it for hours. Talk about boring.

I was really surprised at how empty the gate seemed to be, even with all the delays. Boarding went really fast, and we were PSYCHED when we discovered that the plane was probably only 1/3 full. Nicole and I each ended up with rows to ourselves! I might survive the flight after all!

Dinner was served pretty early, and it was actually good! I initially was going to try watching a movie, but the headphones kept cutting out and the angle I had to sit to see the big tv was uncomfortable. So I tried to sleep. I dozed on and off for a few hours, and then I was pretty much up for the rest of the flight. I read, I ate, I was bored. But at least I had room. That was nice. 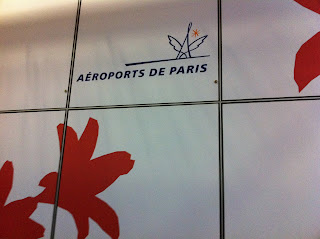 The airport in Paris is under construction and we had to walk for a good 15-20 minutes to check in for our flight. Only to discover there was a strike and our flight was cancelled. Oh. Great. So, our two-ish hour layover turned into an almost SIX hour layover. Combine that with NO food on that side of security and I wasn't very amused. The interesting thing was that they combined two flights and we got a chance to visit with other people at the gate. I bet at least half the people on our flight were doing the marathon.

The flight to Athens was PACKED. I got stuck in a middle seat toward the back. Between a heavy guy who had terrible BO and a smaller, older man who had no concept of personal space.

By now I was completely exhausted and I actually fell asleep a bit. I woke up when the older guy actually CLIMBED OVER ME to go to the bathroom. Yeah. He stepped on my tailbone. Really? You couldn't just tap me and ask me to move? I dozed off and he did the same crap to get back to his seat. Oy. And then... FINALLY!! 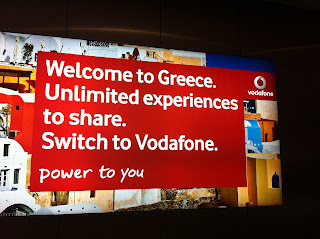 We met up with the tour group fairly easily and we got on a bus that was going to take us to the hotel. Athens is a pretty dirty city. Lots of trash. Lots of abandoned buildings. TONS of graffiti. Blech. We get to the hotel and have a few hours to kill, but there isn't really anything close by. 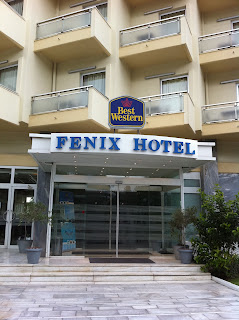 Originally, my sister was supposed to come with me, and we would have shared a room. Unfortunately, she didn't raise enough money. The tour asked if they could book me with someone, but apparently I was the odd man out, so I ended up with a room to myself. YAY!!!

I cleaned up a bit, and then took a quick nap. Then it was time for orientation - we would get to finally meet some of the people who organized all this, as well as members of AHEPA - the non-profit that I raised the money for in order to be able to go.

There wasn't anywhere close by, so a few of us hung out in the hotel bar - had a few drinks.

Laurie was also from Denver, but she left 12 hours earlier than me and ended up with a whole extra day in Greece and was able to do a tour of three Greek islands! (Jealous!!) Headed to bed around midnight - I can't believe I stayed up so late.
at November 03, 2010