Yeah, maybe they lost, but it was still a fun game. Broncos vs. Rams... yet another loss for Denver. Sigh. 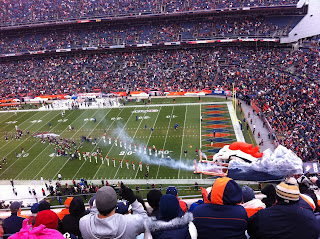 
So, Monday of course is random hill program day on the treadmill. I was in a rush to get to the gym and I wasn't really feeling like running but I have a "schedule" to keep so I was pleased with a mostly "easy" program... except the last 15 minutes or so. 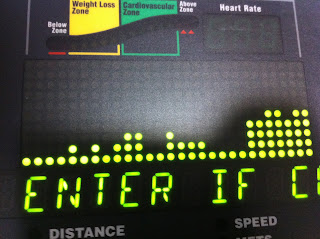 Rarely do I need to get off the treadmill more than once in an hour (usually just to run to the bathroom or get a drink). I had to stop TWICE tonight. I was feeling sick to my stomach and especially the last 5 minutes nearly killed me.  5.0 incline and I had to lower the speed to upper 4 mph's just to keep moving. I didn't walk... but still. It was freakin ridiculous.

But at least I looked cute while doing it! 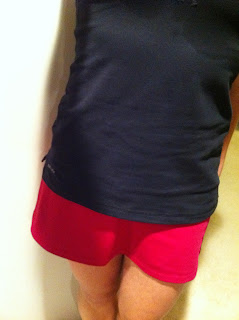 
I went to class for the first hour, and it was just as terrible as usual. Actually it was WORSE than usual because we got there late and I couldn't work out by N and L. We had to complain in between sets and got yelled at by a snarky new girl. Hmph. If I didn't like the CONCEPT of the class so much I would totally not do it. FYI 24 Hour Fitness... more classes and different instructors might help. Blah.

Usually do a bit of cross training after class, but I felt I had a score to settle with the treadmill.

I haven't done anything but random hill program in ages, this time I put back in trusty #6 for 20 minutes plus a 5 minute cool down. It was not nearly as dreadful as yesterday. Hurrah!


And....
The real reason I have been SO busy???
I.GOT.THE.JOB.
Yep. And it's AWESOME so far. Thanks everyone for the kind thoughts! Out of every job I applied for, the one I got was one of the few in my commute range, salary range, AND a literally IDEAL job description.
I'm psyched :)
at November 30, 2010