Close... but no cigar

Unless I have some major injury, I'm on track to hit 1,000 miles for the year sometime this month. I was thinking I was close, but I usually only total my miles at the end of the month. I started thinking about it, and thought that I *might* hit it on todays run. To not keep you in suspense, I would have done an extra loop if I would have known that where I stopped left me at 998.97 miles. Really?? Ugh. Now my 1000th mile will be run where mile 1 of the year was run... on the treadmill.
Anyway, had a funky day yesterday. I was RAVENOUS all day yesterday after my 5k race. So I ate everything. Literally. And topped it off with this:
I ended up feeling funk all night (Funk=drunk like feeling but from eating too much) and went to bed with a stomach ache. Gross. Even when I dragged myself out of bed this morning... yes, it was around 11:00 am... I *still* was feeling icky and full. I didn't eat anything until almost 1. And without having a half this weekend, we had a long run scheduled. But... it was cold. And I wasn't feeling well. And L's quad has been hurting.

Then I thought about it. Sbux was still running its holiday drink BOGO promo, so if I wanted one, I'd need to earn it. We decided to do my Lake Arbor loop and run as long as L was feeling ok. She wore a tank top (!!!) and I wore this: 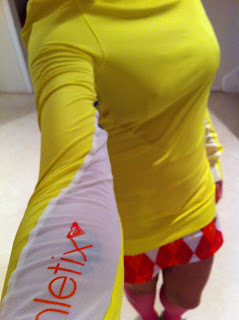 It was freakin COLD out. Upper 30s, but the sun was low on the horizon and it was cloudy. But it was NICE to be running with someone else. I was initially thinking we would do 2 or 3 laps. L was feeling pretty good and we did 4 laps. We would have done 5, but I was STILL cold (rare for me, I'm usually warmed up after 1 or 2) and we needed to pick up the kids, so we left. Had I known that last lap would have put me over 1000 I would've run the extra 12-13 minutes!

First thing I did after picking up the kids? SUPER HOT SHOWER, and then pulled out my footy jammas for the first time this year :D 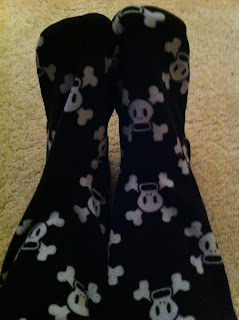