Another early morning. Today we were heading to the Acropolis - the stuff I *really* wanted to see. I was a history minor in college, and historical sites like this I find really interesting.

It was about this time that we ditched our tour guide. I haven't mentioned her yet, but Marlena... wow. This woman talks REALLY slow and repeats herself. A lot. It's not that she doesn't have useful information, but she is tough to listen to.  A group of  us wandered around on our own, taking pictures and reading the signs.


After spending a few hours walking around the Acropolis, we had the choice of going to the new Acropolis museum. Only had an hour to walk around, but the museum houses a lot of the relics and statues that have been found around the ancient Acropolis.


I didn't know I wasn't supposed to take pictures inside, but I got a few anyway: 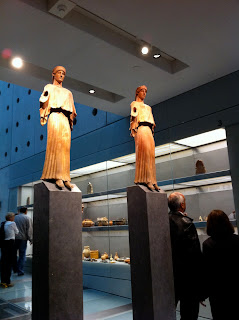 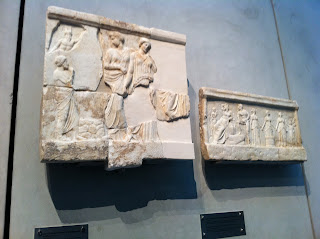 After the museum, we headed back up toward Glyfada. Later in the day we were supposed to head to one of the other hotels that the rest of our group was staying at so that we could pick up our race packets. We only had an hour or so for lunch, but we were right on the beach so I ran out to get a few quick pictures. 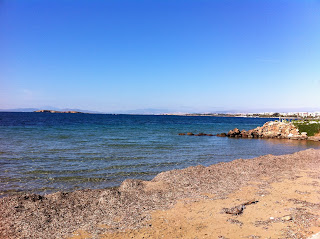 I'd like to say that I had a really good lunch. However, after more than an hour of ordering, our food had STILL not been brought out. About 20 tables of people had come in after us and they were all eating. We talked to the waiter who kept saying "two minutes" and we finally left because we had the race orientation to attend.

We were to learn the meeting places before and after the race as well as specific race day details. Also, the most important thing - getting our packets!!! It took a while to get that done because each person was called up individually. After hearing a speech from Jeff Galloway, we headed back to our hotel. We had a few free hours before the pasta dinner, so I decided to get all my stuff ready for race day. 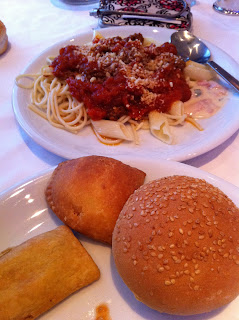 I still wanted to keep all my rituals of dessert and a beer. Jennifer and I walked a few blocks to the closest gas station and bought some Powerade, and of course my beer (bigger and half the cost of the ones in the hotel bar).

We sat in the lobby area chatting. I had half a slice of walnut cake (traditional Greek dessert) and drank my beer. I also arranged a wake up call from the front desk. Greece was having daylight savings and due to the time change, I wanted to be sure I woke up on time.
at November 03, 2010