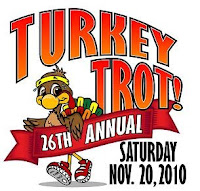 I decided to run this race... oh, last night. And when the alarm went off this morning at 6:20 I muttered "I can't believe I'm getting up this early on a Saturday to run a 5k." But. I ran the race last year, and it was ok. And I haven't had the chance to run with W much, so I dropped A off at my parents house and drove the 20ish miles for the 26th annual Brighton Turkey Trot. I got there about an hour before the race started - hoping I allowed enough time to register, stretch, and use the bathroom.

Registration was fast, and for the second year, they had no shirts smaller than a size "adult medium." Which was ginormous. So, my dad will get yet another race shirt for something he didn't even do. Too bad, the shirt was actually fairly decent.

I managed to find W, had enough time to use the bathroom, and stretch. I was going to get coffee...

W was planning on jogging for 10 minutes before the race. I had no interest in doing that, and decided to stretch a bit, walk around, try to use the bathroom again. By the time I got done doing all that they really did have coffee on the table and I had a small cup. I met W right outside the door, and we got our pre-race pictures by this nifty inflatable turkey. Gobble, gobble!!


We vaguely remembered that lining up was an ordeal last year and that we had ended up behind a lot of walkers. This year (and they may have done it last year too and we just didn't remember) they had the walkers line up on one side of the street, runners on the other. Gun went off and I felt like I got behind some "slow" runners. Immediately this felt hard. I felt like I was running really fast and working REALLY hard. I haven't been looking at my watch, but I was beginning to wonder if there were no mile markers and I glanced down and my watch said we had only gone .79 miles. Oh man.

There WERE mile markes, and I clicked at the first split and it was ridiculously fast. I was REALLY wanting to get a PR today, but I felt out of shape and was really struggling. Just before mile 2 there was a small water station, and I walked for about 10 seconds. I think that MAY have given me enough energy to finish the race. In my head I kept telling myself that as long as I kept moving I should PR, and I forced myself to NOT look at my watch.

This is another one of those courses where you can see the finish line for about a half mile before you actually get there. It's brutal! The nice thing was that I could see W ahead of me, and since she was aiming for sub 26, I was feeling pretty good. I pretty much had nothing left in me to sprint the chute, but I managed to PR. BIG TIME. My previous best time? 28:17. And I crossed the line in under 27 minutes!! Wow!!! W crossed a little over a minute before me and still managed to whip out her phone and get this AWESOME shot of me crossing:

Even though this was a chip timed race, there must have been a malfunction of some kind because I don't have a chip time listed. The official results?? 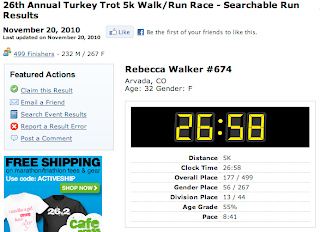 All I can say is wow. I have never EVER had all sub NINE splits. Not even in a short race. I'm psyched!! But I will also say that I think this race was even more difficult than a half marathon. Just sayin.

Last year I think I literally crossed the finish line and got in my car. This year I headed back into the gym. On my way in, an older gentleman stopped me and said "You looked great out there! I was pacing off you and you kept me going!" What? Someone paced off me? Again??? Wow!!! It must be said that I ran this course last year in 29:13, so I shaved more than two minutes off my time!

Anyway, there was decent post-race food. I had a half a bagel with veggie spread (they also had oranges AND apples) and Cold Stone Creamery was giving away ice cream!! I'm actually not a big fan of ice cream, but I grabbed a container for my dad. I've had much larger races that gave less, so two thumbs up for the food!
at November 20, 2010