For the first year, Snow Mountain Ranch was going to have a full weekend of events. ERS skipped the marathon distance and went right into added a 50K distance. Since I'm no longer an ambassador for the series, I figured I didn't need to run the ultra, plus, it was pretty expensive. I was, however, intrigued with the new half marathon course. In the past, the course had always been a double loop of the 10K course. Always a beautiful race, right at the end of when the leaves change. We had one race left to register for with our volunteer hours, so we picked this one. I figured A would want to run the 10K, but upon looking up the info, the 10K and half weren't on the same day. She said she would run the half with me (and then promptly forgot she had told me that).

We needed to leave the house by about 5:35, so I set an alarm for just after 5 am. We grabbed our gear, last minute jackets, and food, then headed out the door.

There was a surprising number of people on I70 at that hour, but everything thinned out once we exited on to 40 in Empire. The drive over the pass was uneventful (no snow, unlike last year), and we arrived at Snow Mountain Ranch right at 7:15.

It was COLD when we arrived. Lucy had read as low as 15 degrees on the drive up, and peaked around 25 when we pulled up. Glad I had my puffy coat! Used the bathroom, then got our bibs. First we ran into Tom and Lynette, then on the way to the car we saw Lexa, then we saw Maureen, and finally Alison and Kristin. With all the socializing we didn't have much time to get our stuff ready. It was borderline warm enough for not needing long sleeves, but I decided I'd rather be comfortable at the start. Put on sunscreen, used the bathroom one more time, then filled up my handheld and we lined up about mid-pack next to Mary.

Race started pretty much on time. Lexa, Mary, Kristin and A all took off. Goodbye!! I knew that this was going to be a more difficult course than in years past, and I had zero desire to burn out early. Plus, Tom had let me know where all the big climbs were.

I had started in a sparkle skirt and my team long sleeve shirt from last year, with it covering my Garmin. This ended up being great, as I had no idea what my pace/time was at ALL for the first 6 miles.

First mile or so was the same as the old course, and I only walked a few small sections. The course became a bit different shortly after, and we moved onto a section where we were running across some tall grass. I didn't love this part. 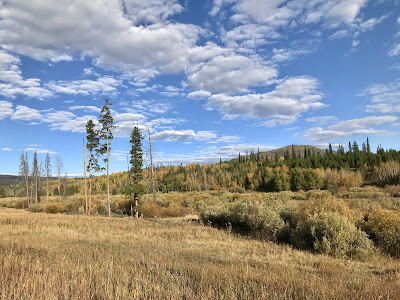 We then were on a dirt road for a brief period of time before turning onto some single track and then moving onto some wider trail. This section was steep, and I could see A and Kristin ahead of me. My first goal was to actually catch them! We were in a wooded section and then of COURSE I didn't quite catch them before the top. A turned around and saw me and they briefly waited for me to catch up. 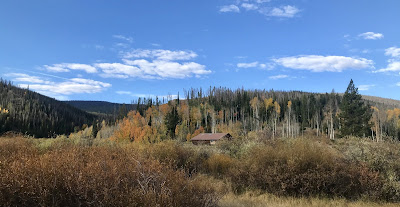 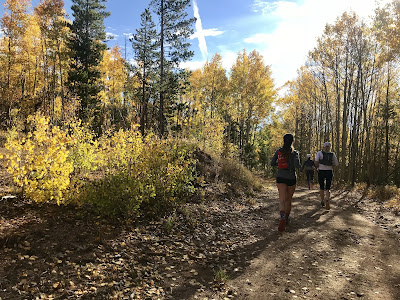 We ran together to the first aid station (not stopping, because I knew that we would be back there in about a mile). There was a pretty runnable section here, including a nice, non-technical downhill. Where there is a down, there must be an accompanying up... even this section wasn't terrible, and we run/walked a bunch of it. I kind of got a second wind and beat them to the aid station. I stayed long enough to fill my bottle, and headed out. We did not stay together long, as Kristin and A seemed to be struggling a bit.

I was able to catch up to (and pass) a few people, that was nice. This whole section had not been familiar, so I was wondering what was up next. Shortly after mile 5, I could see we were going to be going UP. I caught up to a guy, and he let me pass him at the base of the climb (biggest climb of  the run!) and I did some jogging to put some space between us. This section was tough!! Definitely up higher than we had been in years past, and in an area with a lot of trees, although many of them were already missing their leaves. 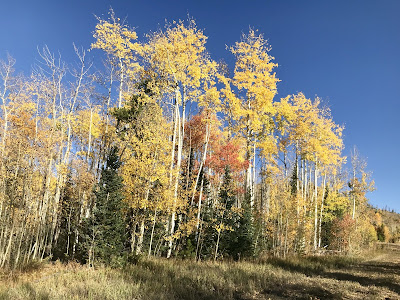 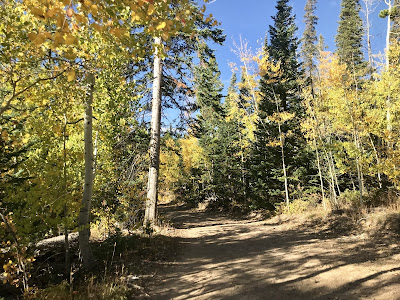 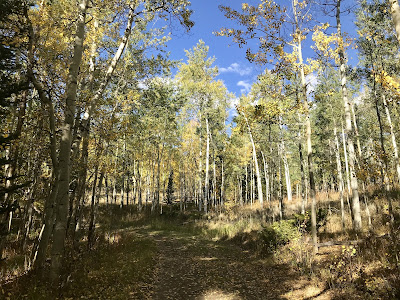 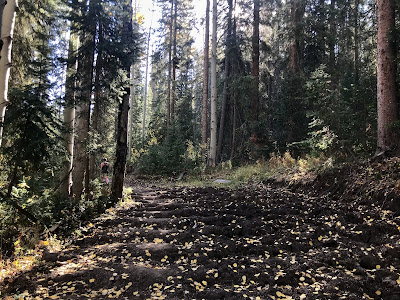 I passed a gal, then ended up behind two older guys (who were both moving faster than I was, however). This climb never seemed to end. I did not want to stop and take a break, but my heart was beating pretty hard. Definitely a challenge! Somewhere after mile 6 all the climbing was making me super hot and sweaty, so I decided I would use the time when I was hiking to get out of my long sleeve shirt. Also a challenge, but I finally got it off before reaching the top. 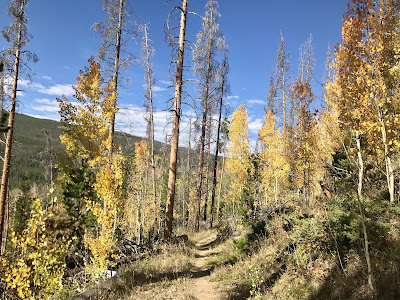 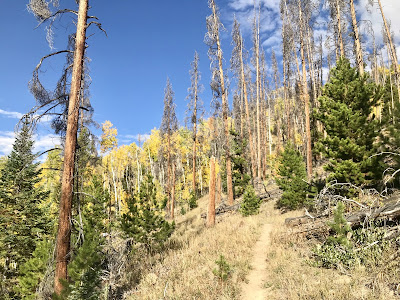 There were some technical shorter climbs that would briefly level out, so there was actually a bit of running here. then we had a nice downhill, heading into the trees. I passed both of the older guys when we got to the road, then had my sights on a few gals in front of me.

I was running really well here and I was happy to have the chance to make up some time on my pace (although all things considered, it actually wasn't that terrible).

We then turned down a road that I remembered from previous years and I figured that I knew what the last 5ish miles had in store for me.

When I turned up the hill toward the summit above the lake, I saw Alison! We chatted briefly on my walk break, then at the aid station I filled my bottles and headed out. I figured I "only" had about 4 miles to go. My "A" goal was to beat previous times, although I also figured that this course was actually going to measure a half, while in previous years it had seemed a half mile short. 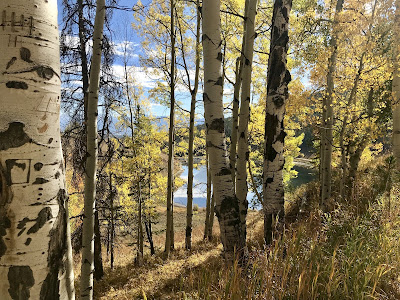 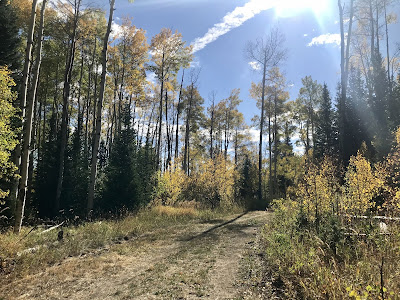 Anyway, running well, and I played leapfrog with a few different ladies on the next climb. It seemed that we were looping around this time, instead of heading directly into the finish. We actually had a fairly nasty climb on some grass right around mile 12. At that time, a gal started talking to me, telling me that her legs were toast (mine too!) and that she was just going to try to hang with me. The last mile went pretty quick, and I knew that we were done with the climbing, except for that nasty last tenth or so into the finish line.

I actually got to watch A cross the finish line for once, which was exciting. (And she won her age group again, although she was the only one in it). 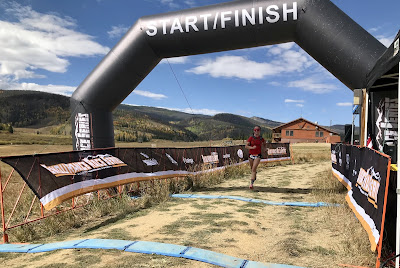 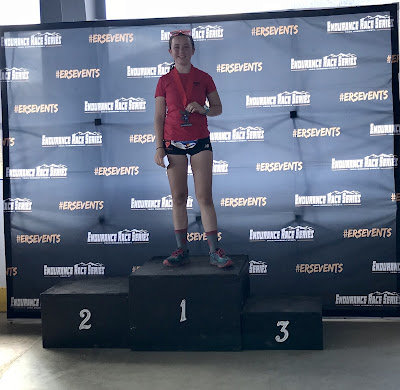