Back in April, a "free" race, the Sourdough Trail Marathon, was brought to my attention. I had barely been racing at the time, and I figured it was free, so why not sign up. When the race was initially announced, it was supposed to be 27 miles. Basically no other information, other than it was limited to 70 runners and would be an out and back on the Sourdough trail near Nederland and Ward.

Over the last few months, we received tiny bits and pieces about the "race" and the course. After I took a look at the gpx that was sent over, it looked like it would be closer to 24 miles, with just under 4000' of climbing. Not terrible, but definitely at a big higher elevation, and I'd be coming off a few months of hard training. Also, there was now a 7 hour time limit.

Out of the 70 people that signed up, we only ended up having 31 people start, with 27 finishers. I get that it was "free," but the race was made possible by people donating money, and the fact that barely a third of the people showed up was kind of a bummer. Wish people would have just emailed the RD as they decided to no-show and other people could have signed up... /soapbox

The race started at 7:30, and Waze estimated just over an hour to get there. I always forget that once I get on the two-lane windy roads in the mountains that speeds get pretty slow. Once I turned on the Peak to Peak highway, things calmed down a bit, saw some deer, and speeds increased. I got there as planned, right around 7. Gave me enough time to get my bib and hit the bathroom a few times. 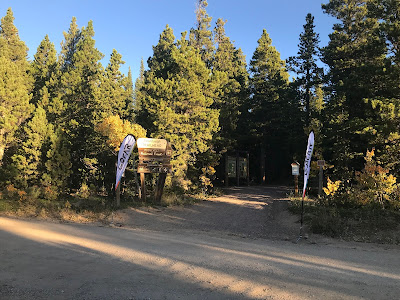 It was a bit chilly at the start, so I opted to start in my arm sleeves, as I figured those would be much easier to shed than a thin jacket.

We started right on time, and I was the very last person across the line. The climbing started immediately, and within a few minutes I was already needing to walk. I made a mental note that at least it would be a downhill finish. 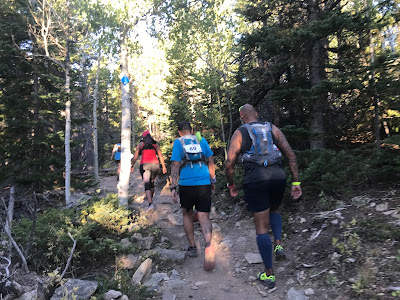 I passed one gal within the first 10 minutes, and managed to stay ahead of her the rest of the day. The trail was really nice, especially in the beginning miles. It was nice and wide, and not terribly rocky or technical. The climbs were not unbearable and I found that I was keeping a steady pace, although it was going to be a pace barely on track to stay under 7 hours.

The early miles were nice and shaded, although I warmed up QUICK. I had been wearing thin gloves that I got rid of after probably 15 minutes, and the arm sleeves came off probably within the first 30. I was already far enough behind people that I was alone most of the time. It was nice and quiet, and I really enjoyed this time, taking quite a few pictures. 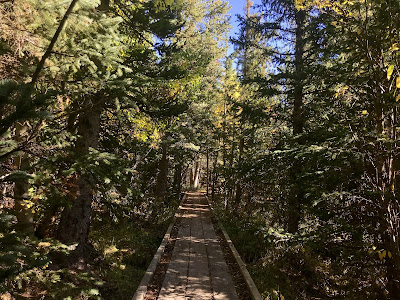 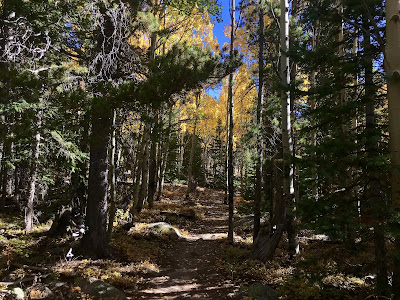 There were two aid stations on the route, and I hit the first one somewhere around an hour and twenty minutes in. Barely even 6 miles in and I was already struggling for time. I couldn't believe it. I passed two more people at within minutes of the aid station (although they both ended up dropping later).

Jennifer was volunteering and warned me that the next section would be rockier. Oh. Great. Rocks. My favorite. There was some nice downhill, so I was able to make up quite a bit of time on this section. It was rocky, but not terrible. I didn't really notice at the time that the grade was fairly decent and that it would not be so awesome coming back. 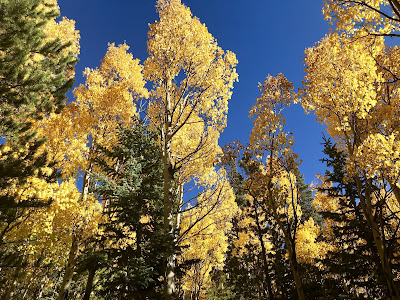 This really was the perfect time of year to have this race, and I supposed trying to plan 5 months out, the weather could really be a crap-shoot. It was warm and sunny, but wow oh wow, were the trees and leaves soooo pretty!!

The trail entered into a big open space where I could really get a glimpse of the colors and the surrounding Indian Peaks.

Again, this section seemed really nice on the way out, but would be extremely warm and exposed on the way back. 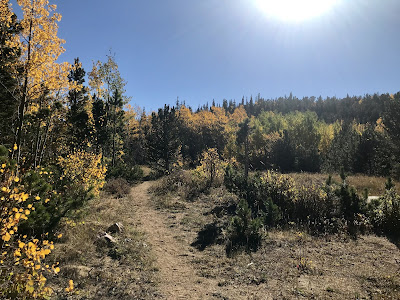 I was making fairly good time at this point and I was still having fun. I was drinking enough and I was fueling well.

There was actually a race photographer, and even though he definitely got a picture of me, it was never posted, so not sure what happened. Right after I saw him the course split and initially, I made the wrong turn. Thankfully, I realized it pretty quickly, only wasting a few minutes being off course. 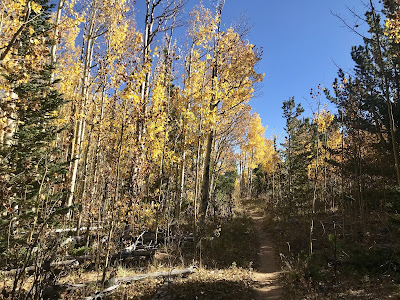 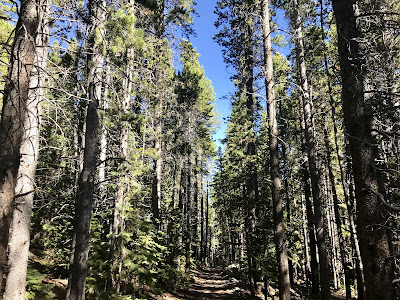 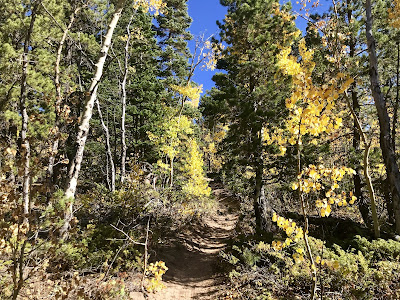 At some point I got to the second aid station. I filled up my bottles and then headed out on the last section before we would turn around. People coming towards me were definitely hiking and not running.

At some point, I had a very strange interaction. We had been alone on the trail all morning (as in, no one but those in the race). There were some cyclists coming towards us and the first biker looked like my brother in law. He said hi and kept going. Then a few bikes after that a woman said hi to me by name. After a double-take, I realized it was my older sister, who I haven't seen or spoken to in a few years. Weird. 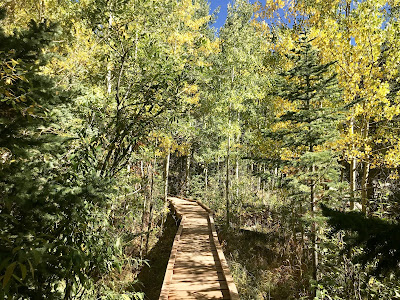 At some point, probably because I was zoning out, I tripped, or caught my toe on something and went flying. Initially, I didn't think it was that bad, but then I looked down and I was bleeding pretty good. I tried to use some of the water from my back to clean off the blood, but it didn't really work and I needed to conserve the water, so I took a pic and kept on. 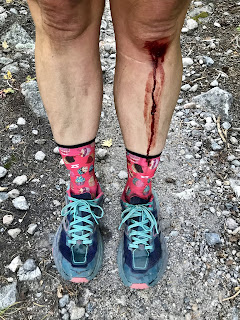 Finally, FINALLY made it to the turn around. 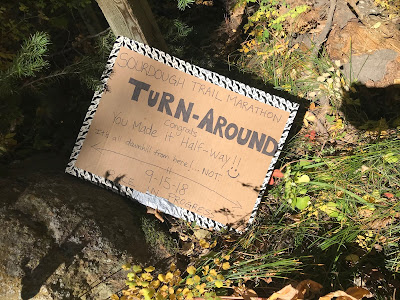 Weirdly, it was ALL UPHILL FROM HERE. I didn't mind it initially because my knee was kind of throbbing from the fall and I was walking anyway. I had arrived at 3:15ish into the race, so I thought I had "banked" enough time to make the cutoffs. 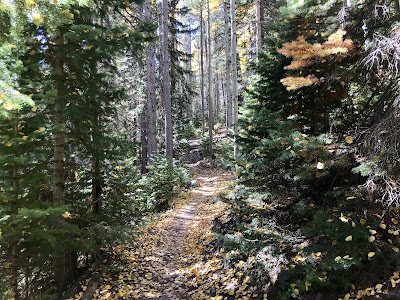 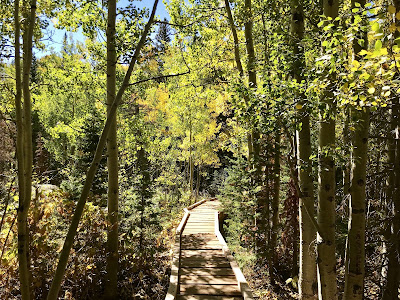 Arrived back at the aid station and when I was filling up I all of a sudden saw a woman come out after me that I had not previously seen on the trail. She was pissed off after having missed the turnaround. Sucks, but this course was not marked, hence why I was running the route on mapmyrun just in case... 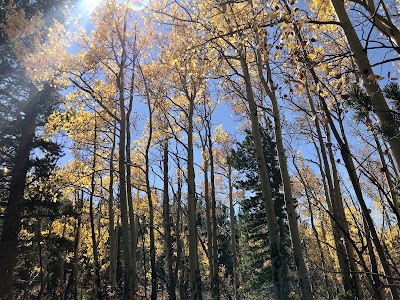 Somewhere around this point was when I was finally starting to realize exactly how much uphill there was going to be on the way back. Even so, I was trying to run at least 30 seconds here and there since I really didn't have any time to waste. 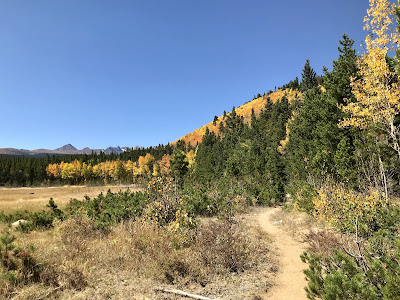 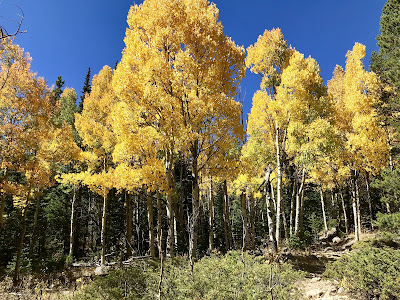 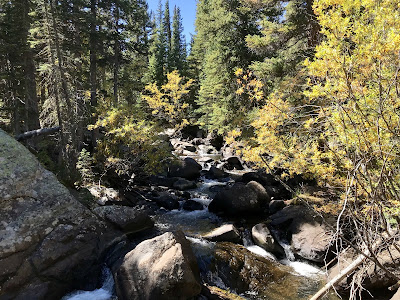 I finally passed a woman right before the last aid station, although she ended up getting in front of me again because she didn't stop to get water and I did.

I was really done at this point. It was so hot, and by now I had only about 80 minutes to finish and there was still SO MUCH UPHILL. I just kept plugging along. Came upon a younger gal who was struggling a bit, passed her and the previous gal at the same time.

Finally we had some downhill. Thanks to getting a bit off course early on and not paying attention to the mileage at the turnaround I really didn't know how much I had left to run. I did know it was less than 6 miles from the aid station, so I just kept running whenever I could.

It was downhill enough that I actually was able to run quite a bit and my last few miles were actually my fastest. That nice "not rocky" trail? What was I thinking, it seemed really rocky on the way down.

I managed to cross the "finish" line with about 6 minutes to spare. Eek, that was pretty stressful for a free event.

I grabbed a ginger beer (I had never had one before and man, I can't say I liked it). 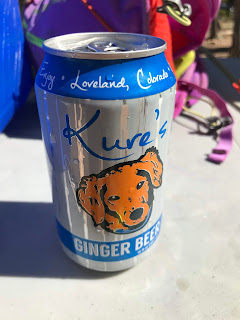 Had another runner take a picture of me and my injuries by the trail head before heading out. 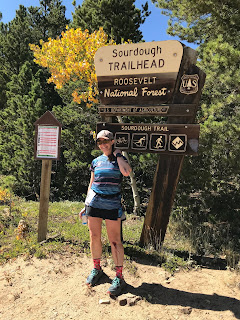