I'm really not sure what drove me to sign up for this race. If I said it was because of the race-specific tattoos, that would sound crazy, right?

Anyway, waaaaay back in January, registration for the race opened. I had already signed up for Transylvania and Burning River and figured, why not? So I registered for the 28k in a panic (it sold out VERY quickly) and signed A up for the 11k. In the midst of everything else that we have had going on, we didn't really PLAN much for this trip. I didn't get in a lot of longer training runs OR climbing, so when we arrived at Big Sky and I really got to LOOK at Lone Peak, I was wondering how/if I would even be able to finish this race - the trifecta of scary as fuck races I wanted to run after turning 40.

Since we had camped the night before, it was even more important to me to get to the start early so I could make sure I had everything, plus I really wanted to brush my teeth and wash my hands with running water.
I was in the third wave, and almost contemplated starting in the second wave - just to give myself those extra five minutes for cutoffs. I finally decided that I'm crappy enough at climbing that I didn't want to piss people off by being too slow for a faster wave, so I started in the verrrry back of wave 3 at 8:10 am. 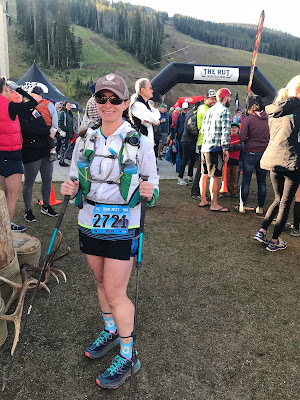 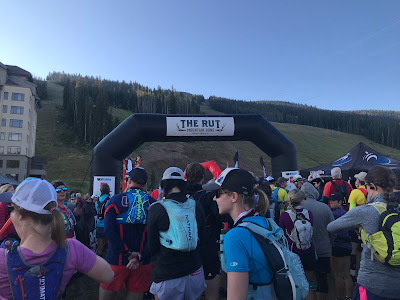 Simply starting the climb out of the start line was tough - I glanced behind me and there were only two people. Why. Why do I sign up for these races that make me feel so inadequate? 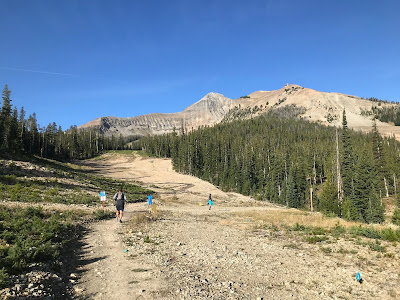 I had started wearing my jacket and was already feeling warm. I managed to make it 15-20 minutes before I was too hot and needed to take it off. I was already so worried about cutoffs that I didn't want to stop to deal with it, so I waited until I was on a more flat section before I started peeling off the layers.

The climbs were fairly steep, but I found that the poles I had brought were helping me a TON. I was already passing people, which felt great!

We had a nice downhill section that I was able to run fairly well. I didn't want to totally blaze down the trail as I knew I would still need some energy to get through the rest of the race. I liked this section of trail - it was full of trees and not really that technical. 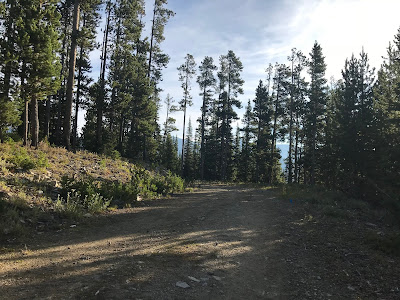 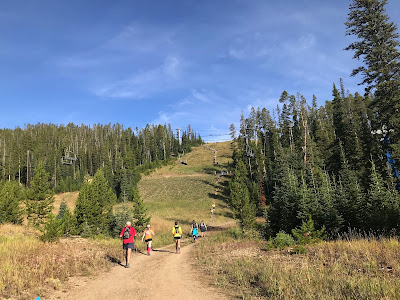 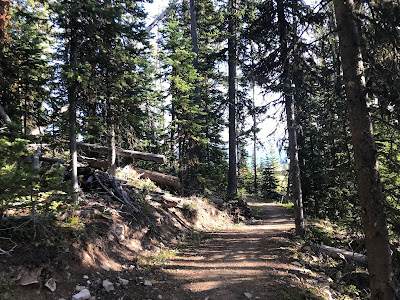 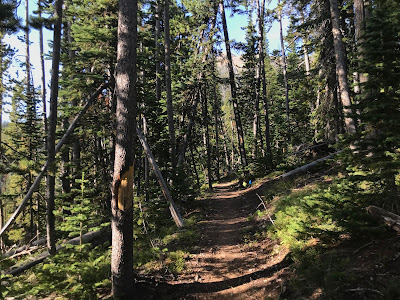 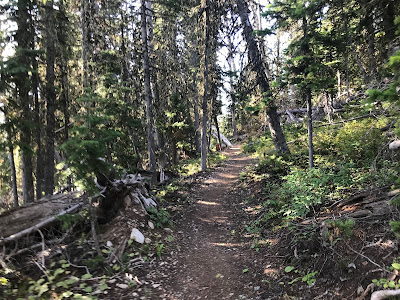 First photographer sighting - she yelled "run for the picture, you can do it!" I did - but it was pretty pathetic. 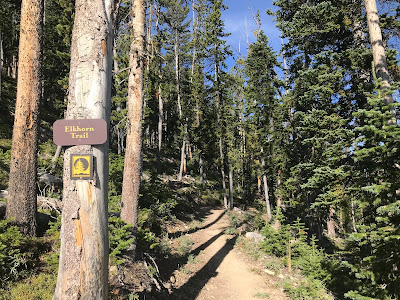 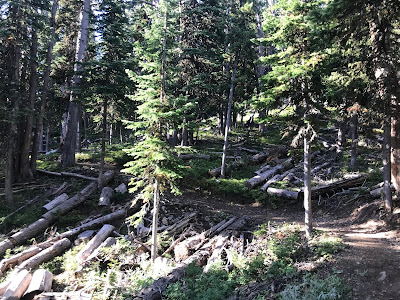 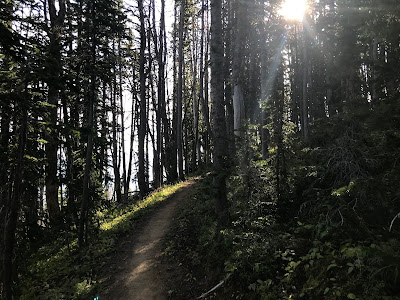 Arrived at the first aid station (which did not have any time cutoff) and was feeling pretty good. I refilled my bottle and grabbed a few gummy bears and headed out. 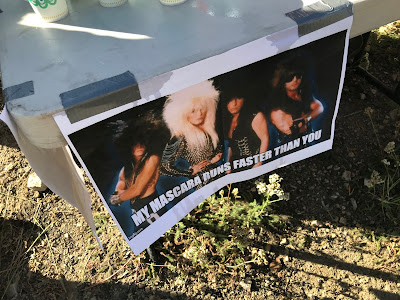 We were heading into the first peak climb - still was moving pretty well. The steepness really reminded me of hiking a 14er, but thanks to the lower elevation I could actually breathe, so that was nice. I really didn't need to stop a ton, I was just moving pretty slow. I was able to pass quite a few people on the climb, which was really unexpected. A handful of sketchy and narrow areas that I didn't love, and I got a volunteer to get a few pictures of me. 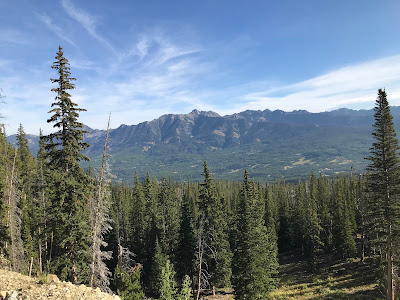 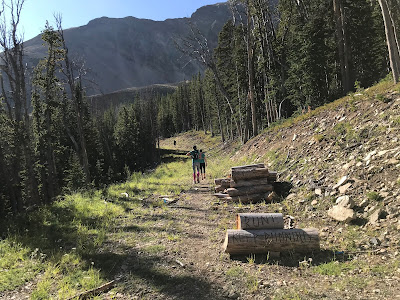 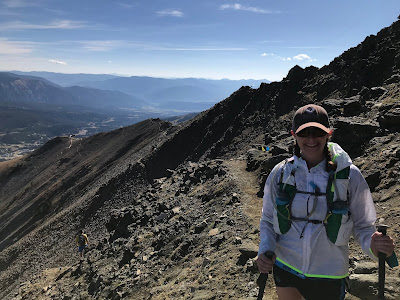 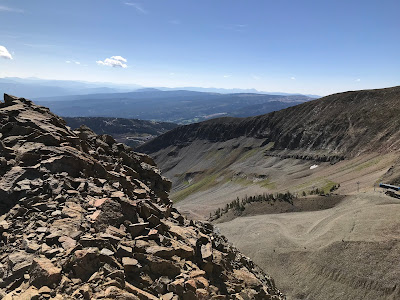 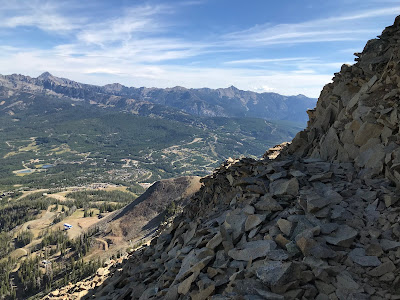 Made it to the first aid station with about 15 minutes to spare for the cutoff. I stopped only long enough to fill bottles and grab some pickles and gummies, as well as sit down for a second to dump rocks out of my shoes. Then the real climbing up to Lone Peak started. The poles were really helpful on the lower section, again, I was able to pass a decent number of people. The lower section had some trees, but we quickly got above treeline into the rocks.

The initial climbing was steep, but not super technical. There was a small ridge where people were stopping for breaks - not me! I didn't have the time as I knew I wasn't even 10 miles into the race yet and I still had cutoffs! Picture is turning around at the base of the switchbacks so I could estimate how long the climb was going to take me. 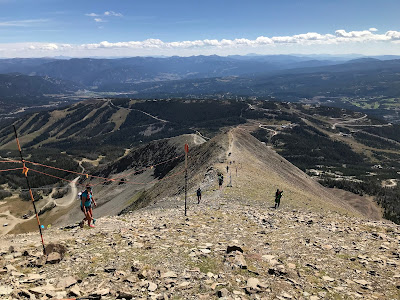 This section really was pretty terrible with the poles. It was steep and the rocks were loose, and I didn't want to catch tips in the rocks. People were stopping right and left, and as much as I wanted to, I really had to keep moving.

I was SO HAPPY when I reached the summit - I had a lady take a picture of me at the top before stopping at the "aid station" for a pretzel and a small cup of beer. 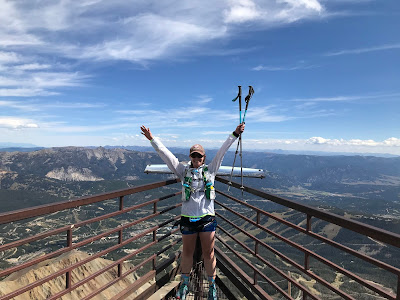 What never occurred to me is that I would have to then go DOWN Lone Peak. The rocks were the WORST. Every single step I was worried about rolling an ankle or catch my poles or falling. I slid a few times, but it was next to impossible to run. I did get passed by a few people in this section because I was so cautious. 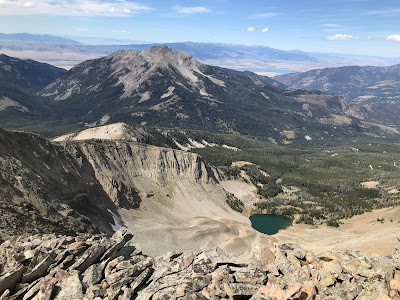 The views were really pretty incredible. It was hard to believe that we weren't actually "that high" - it sure looked like we were! 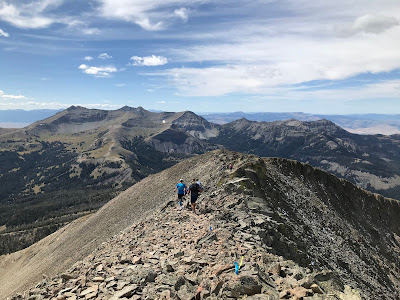 The descent got LESS AND LESS FUN as time went on. (Not that I enjoyed it in the first place). I was so pissed off that I couldn't run and I was really worried about the cutoffs. It was so incredibly frustrating to have such a steep section that never seemed to end. I had a few miles where I was incredibly grumpy.

Finally we got out of the scree section and we were back into areas where at least I could run a little here and there. Around mile 13 we came upon some medics and a group of people were saying that we should be coming up on an aid station - my watch showed we still had a ways to go (turns out mine was right).

We had a nice section of non-technical downhill where I was finally able to run a bit. I took very short breaks as there was still a cutoff at the 14.5 mile aid station.

There was MORE climbing - some steep sections, but not technical. I was hiking with a guy that had done the 50k last year and he said we were on track to finish in time. I was able to run into the last aid station with about 20 minutes to spare!

Once again, I did not stay long. Topped off my bottle and grabbed pickles and gummies (although I stupidly put them all in my mouth at once and that was not ideal tasting).

Upon leaving we were dropped onto some nice, not very technical single track, that was a gradual descent. I was running behind a gal that was pacing pretty well. Pace was slow, but we were moving along nicely. 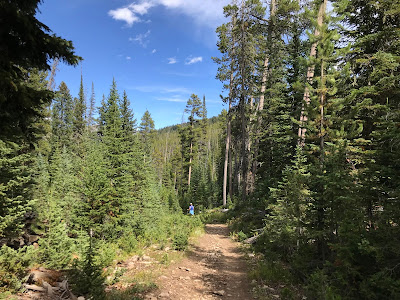 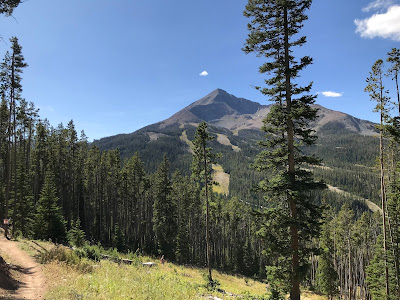 We had a section of switchbacks in the woods where I let a handful of people pass me - I didn't enjoy being the leader of the conga line. We were dumped out onto a jeep road, but only briefly, before we started our last big climb. A sucker punch to the gut to have this big of a climb so late in the race, but at least it was shaded!

We finally were put back onto the road, where I hiked a bit with an older gentleman (I think he said he was 72?) before we were thrown back onto single track for the last mile.

I had put away my poles at this point, and I'm still not sure if that was a bad choice or not. It was stupidly steep going down and I also had developed a terrible side ache that had me walking when I really didn't want to.

All of a sudden I could see the finish area and hear the cheers - oh my goodness, I was actually going to finish!!! 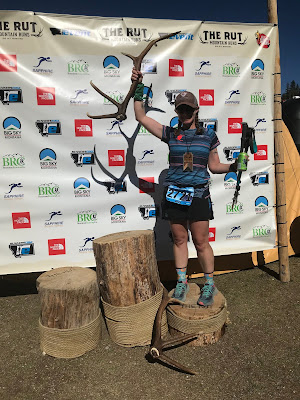 
I had my free post-race beer (Moose Drool!) and then we quickly headed back to Red Cliff in hopes of securing a camping spot. Unfortunately, they were full. Dang!! We headed back into Big Sky to get something to eat at the deli. We both got giant breakfast burritos and brownies. 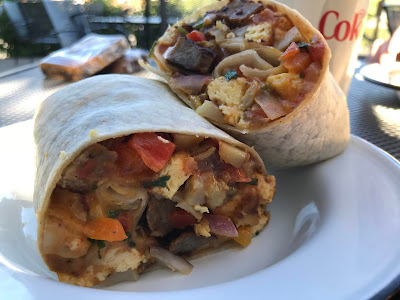 Drove back up to the finish line area so I could get my "free" Rut tattoo! Only had to wait an hour, so it wasn't terrible. 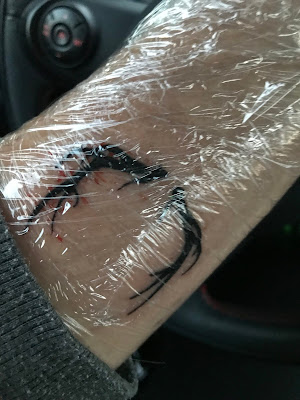 While we were waiting, I checked around at all the local hotels, decided $370+ tax was way too much for one night. We ended up car camping on the side of the road. It's been a while since I have mentioned that trying to sleep in a Mini Cooper is one of the most uncomfortable things on the entire planet.
at September 10, 2018