Tuesday (15,553 steps) - Barre with Sasha.
Wednesday (15,742 steps) - Denver run club. We were in full taper, but decided to do an easy few miles. We stuck around for the special "Brave Like Gabe" event with Brooks - really inspirational!

Thursday (15,624 steps) - So incredibly thankful that Ben is picking A up at school on Thursdays. I was able to stay a few minutes late and not worry about rushing to get her - in fact, I beat them both to Belmar! A decided to walk with Ang and I did the big loop with Dulce, probably half running and half walking. 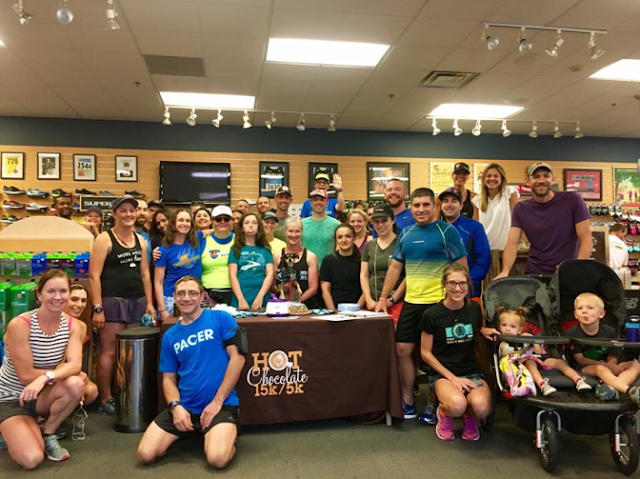 Friday (7,414 steps) - Up at 3 am for the airport. We parked at a new off-site parking lot and it was pretty great. We were apprehensive about flying Spirit for the first time, but our 6 am flight left on flight and wasn't too bad. I'd argue the seats were more comfortable than Frontier planes, PLUS the tray table is still full size. Arrived in Chicago, took the shuttle to pick up our rental car. Omg, was traffic in Chicago and Indiana miserable!!! So much construction, and honestly, put Denver traffic to shame. Stopped in Michigan City at Culver's for lunch. No other stops until we got to our final destination - the Big M trail head to pick up our race packets. 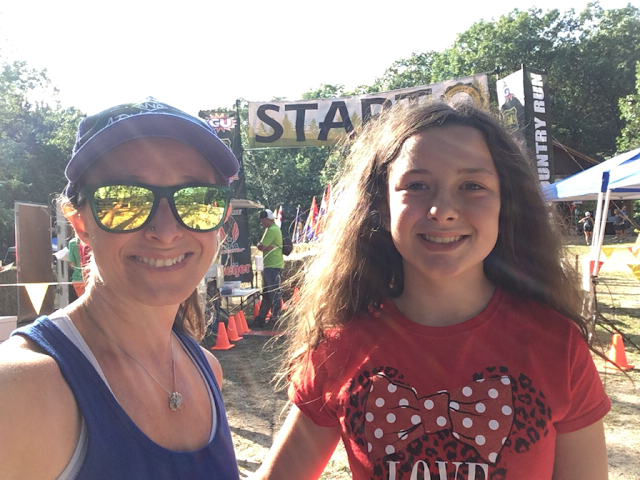 Then we headed to the Dublin General Store. Since A and I were the first of the girls to arrive, we were put in charge of buying groceries. By the time we got to the cabin everyone else was there. I cooked the spaghetti for dinner, and it was probably after 8 before we were done. In bed early.
Saturday (108,235 steps) - North Country Trail Run 50 miler, recap to follow. 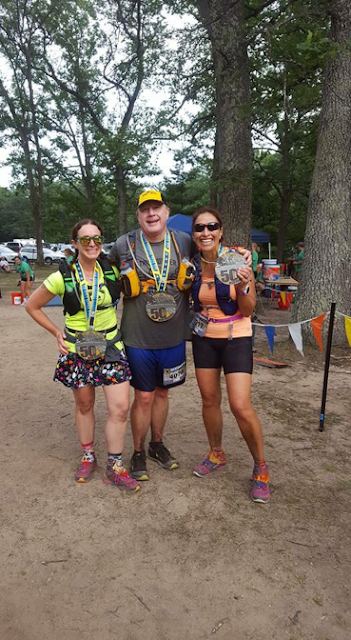 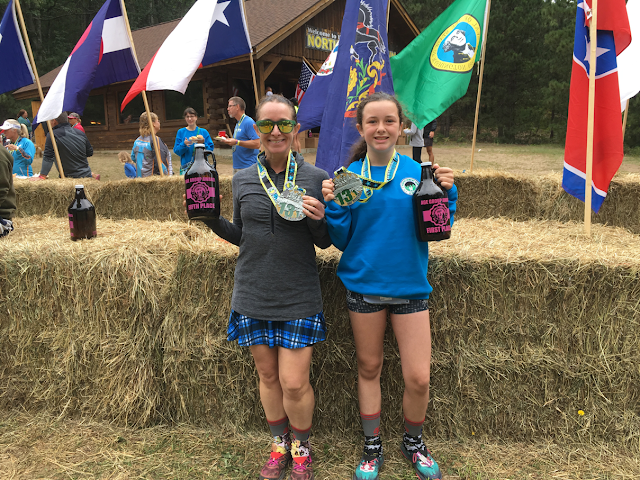 We all stayed at the finish line to get food (and BOY was it nice to sit), cheered in other runners, and listened to awards. Imagine my surprise that my name was called. We then went up to ask about one for A - turns out that since she was only 11, that they didn't have her in the results since the youngest age group was 12-14. They gave her a first place award anyway.

We had about an hour to get back to the cabin, have all 5 of us shower, pack and get out the door. Miraculously, we did it, only taking about 15 minutes longer than we hoped. Annette, Michelle and Lisa headed off in their car for Grand Rapids, and we started the drive back to Chicago. I had guessed that we would have enough time to stop at one brewery, and one stop for food when we got closer to town.

On the drive in I had seen a sign for Fetch Brewing, and I liked the name best, so that's where we went. Sadly, the beer wasn't that great. But, we had already done 90 minutes of driving, so it was nice to get some of that out of the way. 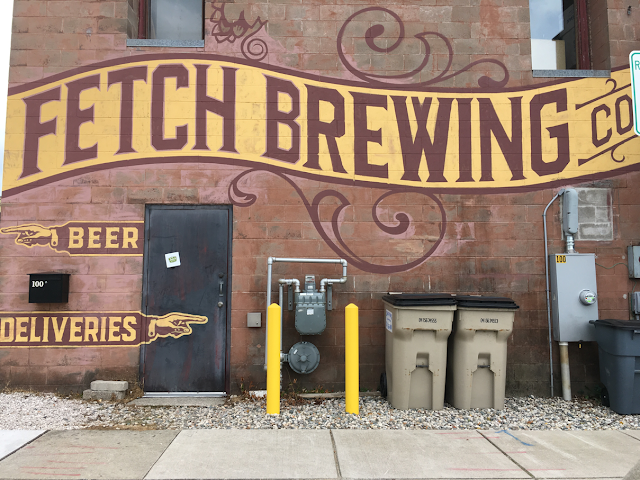 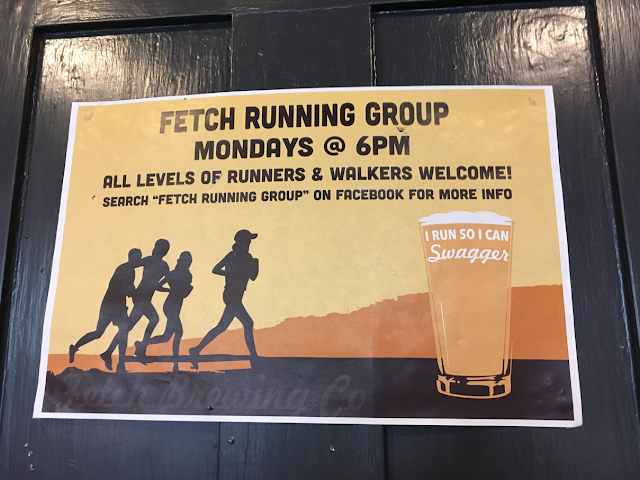 Michigan wasn't that bad to drive through, but Indiana and Illinois were still terrible. The last 60 or so miles were going to take almost TWO HOURS. We finally stopped at a Pizza Hut and grabbed personal pizzas to go. We arrived at the car rental place at 7:45, plenty of time for our flight.

The airport was frustrating. Every security line we went to closed as soon as we walked up. Finally got through security and were deciding on what we wanted to snack on before we thought we should get close to our gate first. AND THEN WE FOUND OUT IT WAS CANCELLED. We huffed over to where it SHOULD have been, were told that we had to go back out through security to talk to an agent. I am livid.

We get out of security and the line isn't that long yet, so obviously we must be the first people dealing with this. They only offer to put us on the same flight schedule the next day, or refund. Well I'm certainly NOT staying in Chicago for 27 more hours, so I ask for a refund. O'Hare is a giant airport and we can't easily get to other airline counters. I can't get my Orbitz app to work on my phone. I can't use my laptop because they don't have free wifi. Finally find a not-so-terrible flight on United, but it doesn't leave until noon. Looks like we are spending the night in the airport. 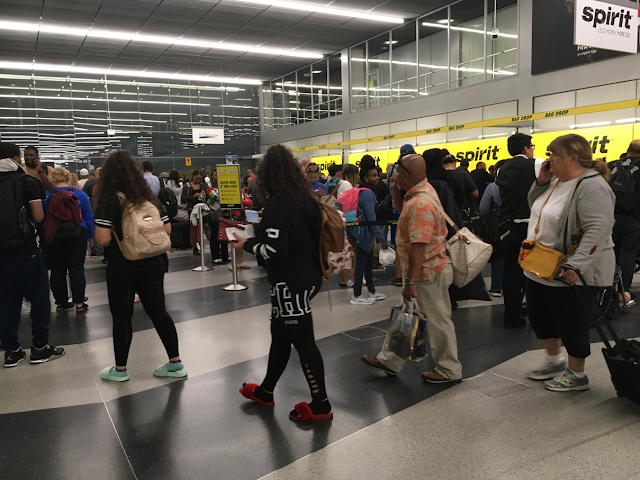 Try to check in for our new flight and get back inside security, but our ticket says we have to talk to an agent. We are in terminal 3 and have to get back to terminal 1 to get to the United gates. Finally, we get checked in and have to go through security. Again. By now, everything is closed, so I guess NEVER MIND on grabbing a really late dinner. We watched some Netflix on my phone. A was able to sleep, I was not. 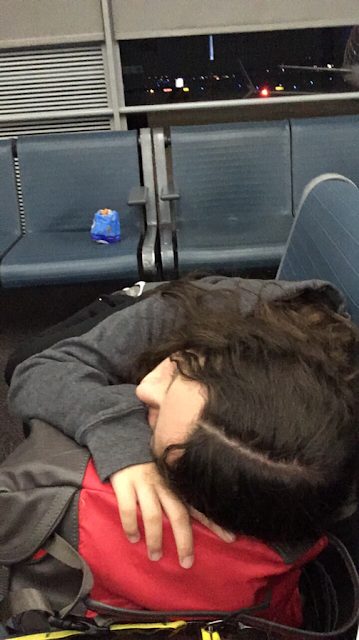 Monday (9,196 steps) - Oh hey, still in Chicago. I maybe got an hour of sleep. They were vacuuming, slamming doors, etc. We got up around 4 since there was no way we were going to be able to sleep. We got breakfast number one, and proceeded to stalk all the United flights in hopes of getting on an earlier one. No dice, they were all overbooked. We got second breakfast (early lunch) at Chili's at 10, and also picked up some cheesecake. 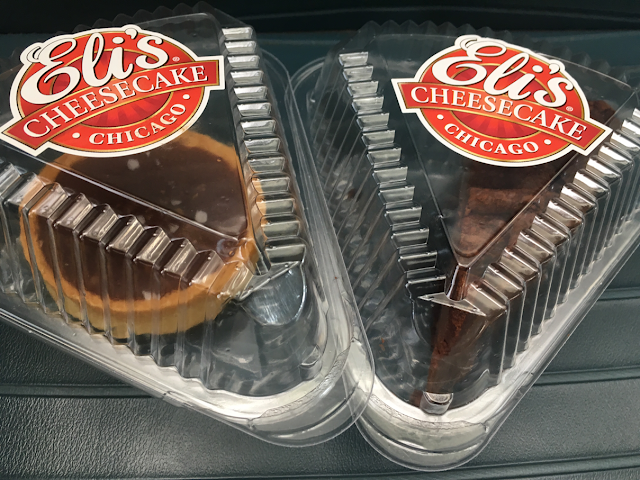 Our flight was scheduled to leave at 12:20. We were not going to be sitting together and both had middle seats. I managed to actually doze off for about half the flight. We landed early, and getting to the new lot was no problem. I was expecting to have to pay for another day of parking, but their systems were down so it was freeee. Silver lining I guess?

Finally got home around 3:30, with enough time to get A to her Girl Scout meeting at 4:30. Laundry, dinner and to bed INCREDIBLY early.