Literally a YEAR earlier, a bunch of us thought it would be a great idea to have a "Colorado" weekend in northern Michigan and do a little trail running. The North Country Trail Run is in it's 18th year and boasts a 50 mile, marathon and half marathon on Saturday and a half marathon on Sunday, with anyone completing both days getting a separate award. They also claim to have giant medals. Well, with the race being ridiculously cheap (like $80ish?), I signed up to run the double (50M/13.1) and signed A up for the half marathon. The race said that the minimum age was 12, but I put in her birthday during registration and it didn't kick it back, so we were good to go.

Fast forward one year. Obviously I didn't have PHENOMENAL training, but I had at least gotten out on the trails a bit. Never mind I had not done any runs over a half marathon distance since Chase the Moon back in July. I'm sure it would be fine.

The ultra distances were supposed to start at 6:15. Lisa and I were the only ones doing the 50 mile. Annette and Melissa were running the marathon (it was Annette's first!). We opted to all just go over together so that we could get better parking. We were immediately concerned with HOW DARK IT WAS. I had not brought a headlamp, and neither had Lisa. We stood by the fire and pondered if we could just hold our cell phone flashlights until it got light. We met up with our other Colorado buddy, Dave, just before we were supposed to start. 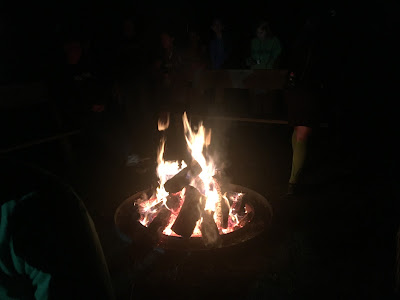 Turns out, they started the race closer to 6:35. By that time it was light enough we didn't have to worry about it. I lined up towards the back, looking forward to a day on the trails.

Lisa, Dave and I started out together. The pace seemed a bit faster than I should be running, but the temperatures were perfect and there was SO MUCH AIR... we ran the first three miles or so before we took our first walk break. Dave kinda did his own thing, and Lisa seemed content to run my pace. I was struck with how green and pretty the course was! It was seriously like something out of Avatar or Jurassic Park. It was also the quietest trail I have ever been on. No sounds of rustling animals or birds. Almost a little creepy.

The first aid station was the furthest out, especially since on the first loop we would have a small 1.7ish mile loop to add distance. We hit that at mile 5, feeling good, didn't stop long. We headed out and somewhere around mile 7 we started to get passed by the faster marathon runners, who had started about 45 minutes after that. 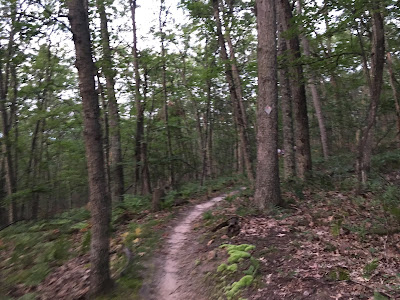 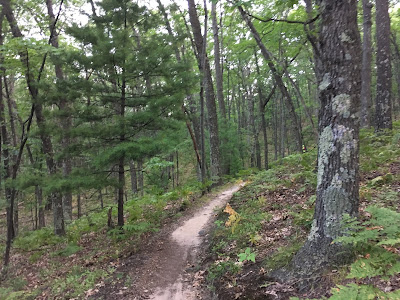 We both used the bathroom at the third aid station, which is where Dave took, off. Probably 95% of the course was single track and there were ALL THE TREE ROOTS IN THE UNIVERSE. Sure enough, I had fall #1 somewhere around mile 8. We jogged most of the shorter climbs and then hit another patch of fantastic flats after the third aid station, which is when I had fall #2. The sun started to shine through the trees and it was really hard to see what was a tree root and what was a shadow. Even with staring at my feet, the roots were just grabbing me. Doesn't help that the more tired I get, the more I drag my feet. 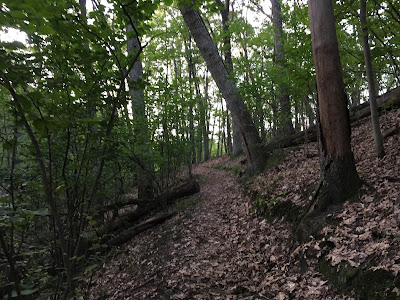 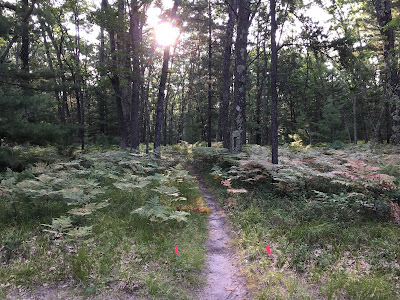 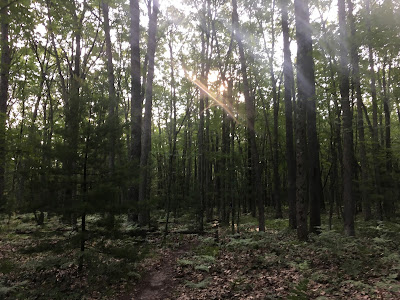 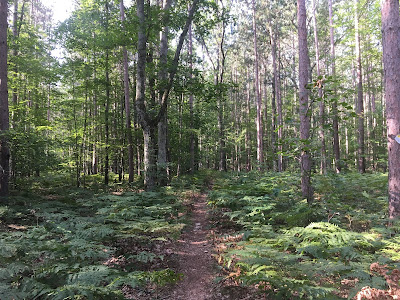 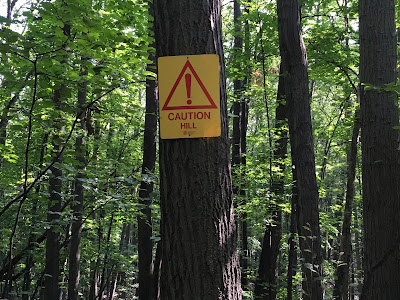 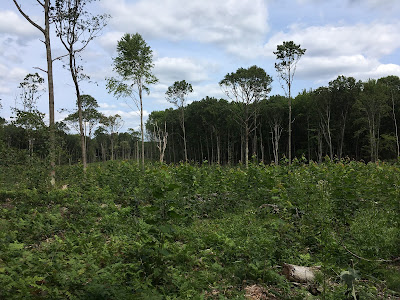 Thankfully, the humidity never seemed to get worse and the temperatures never seemed to get higher. Lisa and I were doing really well. The back half seemed to have more hills, but they all seemed to be short and "steep," so they weren't a huge deal. We had one guy that passed us (twice) and fell both times going around us. There was one guy who cramped up and literally fell down right in front of us on the trail. Almost everyone had dirt or blood on them somewhere. What we "gained" by not being at altitude was certainly lost with those dang roots!

We got to a flagged section (that we didn't know was almost at the end), and it was a horrible "sand hill" to the top of an old ski lift. We had no idea we had climbed so much. The nice thing was that meant that it was all downhill back into the finish area, where we had completed a "marathon" and only had 25 miles to go....

Lisa's back was bothering her a bit but I convinced her to keep moving. We met up with Dave at the aid station at the start, and headed out at 6:07 of moving time. We ended up running together the entire loop, which was fantastic. I have never run with either of them, and it was so fun to get to know both of them better.

The second loop, although later in the day, seemed to go by faster, and we were alone probably 98% of the time. We were passed by about 4 people and we passed a few ourselves. We were in no danger of not making the cutoff (14 hours), but we had a goal to get under 13. Lisa had never run an official 50 and Dave's PR was 13:58. I had fall number three somewhere around where I had fallen the first time, this time, flying and landing on my stomach, which nearly knocked the wind out of me. 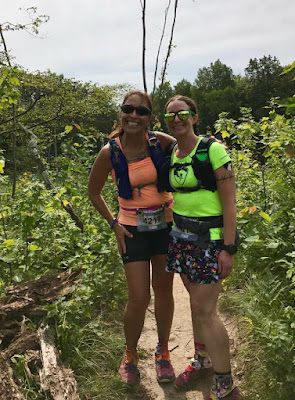 Thankfully, the hills didn't seem as bad the second time around, so even though we were slower, and probably walked more, we were all doing fine. We didn't even stop at the last aid station since we knew that we were so close to the end. We all sprinted through the chute together and held hands for the finish - totally cheesy, but we were in it together! 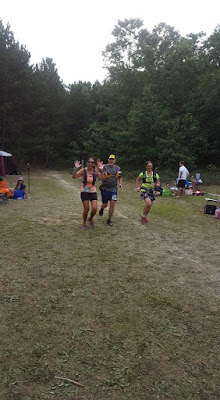 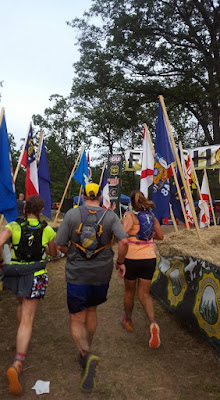 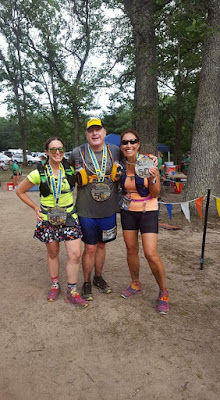 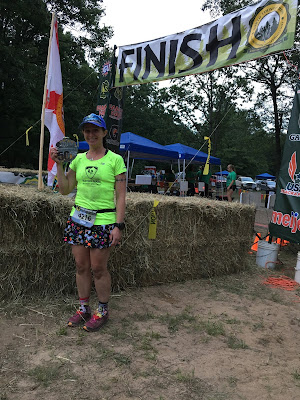 Melissa, Annette and A were all at the finish, and they were awesome about getting us food, beer, etc. We cheered in every single runner that was left before we headed back to the cabin.
at September 07, 2017