We left the house with plans on arriving at the parking area with about 45 minutes until the start. Our pre-race email indicated that it was a "5-10 minute walk" to the start area. However, having run numerous races at this location, I knew it would a). take longer than that and b). that we would not be coming back to the car after picking up our bibs. 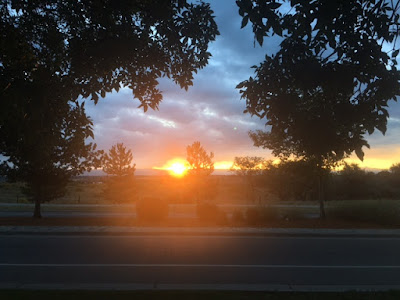 Sure enough, it was probably closer to a 15 minute walk. I immediately  headed to the bathroom and then picked up my bib. Time flew by while I was talking with fellow teammates and Tom. Before I knew it, it was time to start. Temperatures were a LOT cooler than they have been lately, and I *almost* left my 1/4 zip on. Decided about 30 seconds before the start to ditch the long sleeves. The first few miles were a bit cool, but overall it was a good decision to run in the singlet.

I felt pretty good the first few miles, I had planned on starting slow, hoping to avoid cramping. I even skipped stopping at the first aid station since I was feeling so good. Stacy had taken the early start and I saw her just before the turn around for the 10K. I stopped briefly at the second aid station, which was at the half marathons first turnaround, approximately mile 4. I had noticed when we were on our way out that the second out and back section did not look like it was in the same place as last year. It was a good thing there was someone out there telling us where to turn off. The trail was so overgrown I don't know that I would have seen it on my own.

This section was kind of fun! Maybe 2/3 of a mile of true single track - overgrown brush and grass and prickly plants. Then we moved onto some double track before finally ending up on pavement for about a half mile before we got to the turnaround. By this point I am still feeling pretty good and I have NOT taken a walk break. This is unheard of. I ran all the way back to the split, and then headed back up to the aid station (the one that had been at mile 4, and was now mile 9). Grabbed some electrolytes and ate a few peanut butter pretzels. 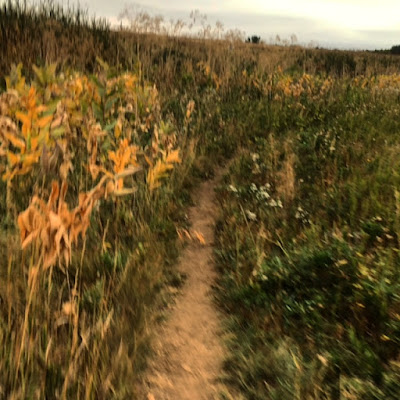 I was STILL feeling pretty good and I thought - WHAT IF I CAN RUN THE REST OF THIS WITHOUT WALKING? It might seem hard to believe, but I don't think I have run a half marathon without taking a walk break (I don't count aid stations) in probably 5 years. I was trying to keep my pace steady and when I got to the last aid station, around mile 11, I knew that there was still one section of climbing.

I actually managed to jog up the last climb (slowly) without walking. It might have been better if I had walked, because the last mile or so seemed exceptionally tough. My pace was the slowest it had been all day, and the last quarter of a mile it took everything in me to not walk. Ty took a video of me at the finish and I swear it barely looks like I'm moving.

Anyway, pretty damn pleased with this race, I felt good about 95% of the race and I accomplished something I don't normally do in a race. My time was almost the same as last year, although last year the course was short because the wrong trail was marked. So really, I ran a lot better this year.