When I ran the Longmont trail half last year, I was injured. I took the early start option because I wasn't even sure if I would be able to run it. I was able to super slow jog it and finished in just under 3 hours. Since I like to set the bar low, my only goal was to beat last year's time.

The half was starting at a terribly late time of 7:30. We left the house a few minutes late, but with no traffic we still arrived around 6:45. We parked at the Fairgrounds and had to walk a bit to get to the start area. Packet pick up was easy and I also got my Eagle shirt and medal (after I sent my GPS data to the race director, I was given credit for the run so I'll be a finisher for the ERS half marathon series!)

Phil from Runners Roost had a tent set up, so we left our gear with him and just wandered around until it was time to get in the bathroom line. A's race didn't start until 7:45, so while I was getting ready to run, she hopped in to assist with packet pick up.

The race started right on time, and I started in the pack, as usual. I won't lie, I was really really really tempted to do the early start, simply to avoid the heat. But, I didn't.

The first mile or so went fine, but it was pretty much all downhill from there. I'm back to having the same issues where my legs (specifically my calves) are ridiculously tight, forcing me to take frequent walk breaks. The first aid station was a bit further than I remembered, maybe around 2.75 miles out.
On my way back to the next spigot, I saw A! She looked fantastic AND had started 15 minutes after me, and was less than a mile behind me. 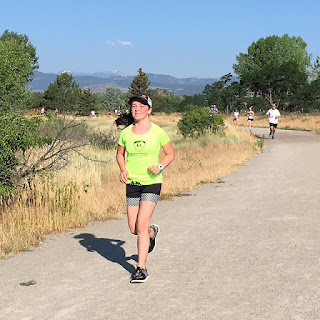 The half marathon and 10k both had another out and back before heading into the finish area. The half'ers had to go a bit further out, but thankfully I got to see A again before she turned around, although this time she was walking. I spent the next ten minutes or so trying to figure out if she was going to meet her goal of finishing in under an hour.

When I got to about mile 5.5, A caught up to me again, I told her to "go go go, you're almost there, you've got this!" And she took off. Shortly after that, a woman jogged beside me and asked how old A was and said that she was just doing amazing. They were announcing names as people crossed and I didn't hear A's name! Stacy was directing half marathoners out for their second loop, and right as I headed out, A came running out and gave me a big hug and said "I did it mom! Under an hour!" It was the cutest thing, she was teary and so happy. Worth the 30 seconds I lost to be there for her at that moment.

But then, of course, I still had a whole loop to do. By the time I got to mile 7 the faster runners were already coming in to the finish. It was so hot out! Very little recollection of the second loop. Just tried to walk as little as possible so I could be done. I managed to pass a few people, I think the heat was getting to everyone.

A caught up to me when I had about a mile to go. I gave her my handheld and told her I would see her at the finish line. My "A" goal was under 2:30, but I wasn't disappointed that I missed that by a few minutes. I can live vicariously through A.

Met up with A at the Roost tent, where we had to immediately do our team picture.

We stuck around the finish for a while. There wasn't really any food left (but I wasn't especially hungry anyway), and there was sadly no beer at this event - one of the few at a city park where it isn't allowed. Helped Phil take down the Roost tent, then headed home.