The Maine Half Marathon was added fairly late to our race schedule. It was one of the last remaining open weekends we had and decided to go for it. I don't know WHAT I was thinking when I booked our travel, and we had some less than ideal situations. First, we didn't have a direct flight. THAT wasn't my fault. There is apparently no such thing as a direct flight from Denver to Portland, ME. So on the way out we had a connection in Philadelphia. We weren't scheduled to land in Maine until after 10:00 pm, so we were going to have to have our carbo load dinner at the airport. Not too many choices. I ended up picking:

L is *insistent* that we have been kicking so much ass lately because we are also having dessert with our carbo load dinner. THAT choice was much easier to make. We split these:

Followed that up with my pre-race beer... didn't want to feel obligated to find some after 10 at night AND drink it before bed. So... blah to all that.

The flight was short between Philadelphia and Portland, I think we even landed a few minutes early. The airport in Portland? Teeny tiny. Got the rental car with no problem and headed to the hotel, unfortunately another 20 miles away. Hit one toll station on the way there, and finally got to the hotel after 11:00 pm (very late for a race night!) Got everything ready for the morning (notice the bib isn't there? Yeah, we have to get up early to pick that up before the start): 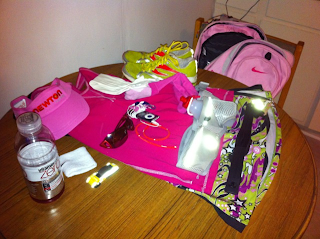 By the time I get in bed, it's already nearing midnight. And I could NOT sleep. I was tired but kept tossing and turning. When the alarm went off at 5:00, it felt like I had not slept at all. Unsure of how bad the parking would be, we decided to get there on the early side since we still had to pick up our packets and then find the start line. We ended up being worried over nothing on that... got there and the security for the University hadn't even been there to unlock the parking garage yet! We parked in the lot just behind it and walked a few blocks to pick up our packets. Strangest packet I've ever received.

Anyway, the bag is neat, one of those backpack things. The shirt is Brooks - long sleeve and pretty nice! We decided to sit in the car and wait for the sun to come out and warm things up a bit. It was CHILLY out: 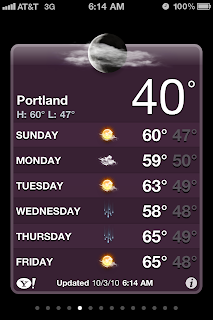 The start line was literally only a few blocks from where we parked, so we waited until about 45 minutes before it started to head over there (you know, have to do the potty ritual, look for coffee, bag drop, etc). While in line for the potty, a girl (in the black dot running skirt) comes up and says "I follow your blog! I'm from Canada!" Yay for being recognized :D - of course I'm super rude and forgot to ask her name, at least I think I remembered to wish her luck. To kill time we wandered around a bit by the start line: 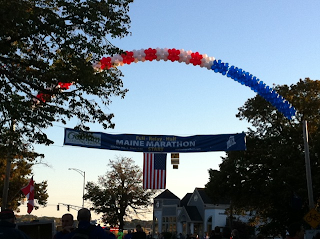 Twenty minutes to start. Decide to do the bag drop - wow, that was easy and organized! (Not sarcastic, it really was!) Then downed a free cup of Starbucks (with some sugar-free cinnamon syrup) and then one last trip to the potty... Shouldn't have had that coffee I think... Line up at the start, no corrals, pretty crowded.

I take my first GU (Chocolate Outrage, Yum) and then the gun goes off. Normally, I don't even hear it, this time it scared me half to death. And we were off... As usual, pretty crowded in the first mile. I ended up crossing the small grass section between the road and the trail by the Cove to avoid some of the slower runners/walkers (Race sold out with 3,500 total particpants between the full, half, and relay). I again went into this race with no real expectations. I didn't log that many training miles again (trying to heal the foot) so I just enjoyed this one. I cannot even express how beautiful this course was. The leaves were changing, the sky was clear, we ran most of the course by coves/rivers or in "wooded" areas, so there were TONS of things I was looking at (besides my watch, lol).

The crowd support was actually really amazing during this race. The course did weave through some residential areas, and with it being an out and back, people lined up along the streets that had closures (some of the streets remained open, so we really had to watch how wide we spread while running).

According to the course/elevation profile, the course was "mostly flat" with the only "hills" being between mile 5 and 7. Let's just say that MY definition of hills usually is different. With that in mind, I took my second GU (Espresso Love, YUM) right after hitting mile 5. And then... my fear came true and I had to stop (AND WAIT!!!) to use the potty just past the mile 5 marker. It felt longer than it probably really was, but I bet 70-90 seconds were lost. Boo.

But... I felt AMAZING. I saw L around mile 5.5 after the turnaround - I estimate she was only 5 or so minutes ahead of me. Not bad!! I managed ALL the hills without walking, or even really slowing down. I was COOKING during this race. My foot was feeling good and *I* was feeling good. I hit the turnaround, and Glee version of "Don't Stop Believin'" came on, and it set the tone for the second half the race. I stopped at every water station, but after the last two races, I made sure to drink a little less to hopefully avoid the cramping issues I've had around mile 10.

This race? I hit mile 10 at 1:32 min... What????? The 10 mile race I did in February to prepare for my first half marathon I finished in 1:49:55... how did I get so fast??? I knew if I could somehow keep my pace for the rest of my race that I would have a new PR... So I ran. As fast as I could. I finally started to struggle with only a mile or so left of the race. And then I heard "'Till I Collapse" by Eminem right at the 12 mile marker. It was the perfect song for me to hear. I just kept going. I finally started to look at my watch and I was really hoping that if I ran as fast as I could I would break the 2 hour mark. Sadly, I didn't have any kick left to sprint the last .1 like in most races, and I finished in just over 2 hours. (In my defense, the course was long and I *had* stopped to use the bathroom). But... NEW PR!!! 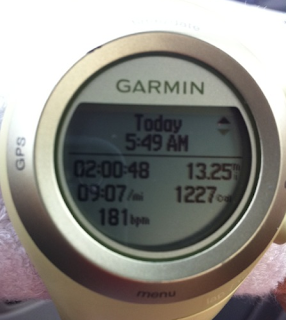 Not just a new PR, but a new PR by over THREE minutes! And I did it on a course that was NOT "flat and fast." Easy pick-up of my bag, took some food - I somehow managed to drop my cup of cookies and L dropped hers of Fig Newtons. Boo. And then back to the car...

Got back to the hotel, showered and by the time we checked out it was already almost noon. We had a few hours to kill, so we drove to Cape Elizabeth. We were STARVING and figured we would get food on the way there and saw NOTHING... We found one of the lighthouses:
﻿﻿﻿﻿
The "shore" off Cape Elizabeth: 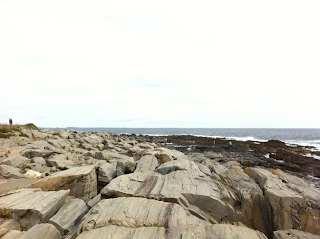 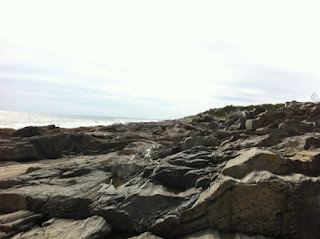 There was ONE restaurant, called the "Lobster Shack" - and we were starving, so we checked out the menu. They were ridiculously busy (being the only place to eat within MILES) and they had a cheeseburger on the menu, so we ordered. The food was good but WOW, this place was disorganized and very VERY busy. We ended up eating outside and it was FREEZING.

Left the coast pretty quick and drove around Portland for a bit... somewhat unintentionally. Mainly we just wanted to get to Starbucks but couldn't find anywhere to park. Saw this statue of Longfellow downtown: 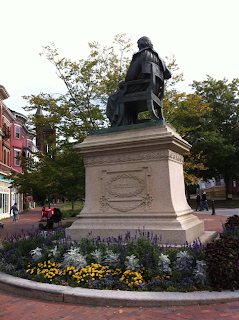 Decided we might as well try to find the airport. Apparently not an easy feat. The &#*$& iPhone only wanted to locate the Portland Airport (PDX) in Oregon, and insisted I wanted to drive 3,000+ miles to get there. The signage in our area was poor and I got lost (and annoyed). Finally found our way, getting to the airport 3 hours before our flight. Which was fine with me. I was tired. Way home was a connection in Atlanta (where I inhaled a small pizza and breadsticks) before continuing on to Denver. It was almost 1:00 am by the time we got home. I need to schedule better flights.
at October 04, 2010